This is it! The big one!

Share All sharing options for: 2013 SCH Gif Tournament: THE FINAL

It's been a long way down the (holiday) road to get here, but we've finally reached the Ultimate Final. Two gifs, selected by you, the people of SCH, have battled through three rounds of incredible competition to get where they are today. We're within reach of the final prize. The Grand Finale. The One For All The Simoleons. The Super Bowl, if you will (with three halftimes!).

I was browsing back through some of the earlier rounds, and wrangled up a few stats on the tournament to date that I thought were pretty cool:

- Most Votes For A Single Gif In One Round: 167 (Seabs GWG in the Rask Final)

- Number of Gifs Nineteen88 Could Not Get To Work Properly In A Post: 1 (Drunk Harry Caray)

And after all that, here's your final bracket, so you can see the whole tournament in one handy place. 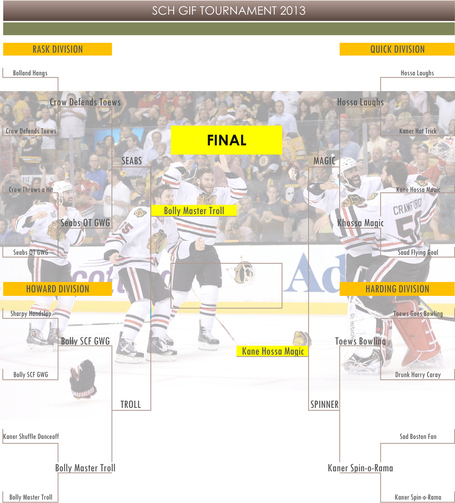 I believe that everyone's more than ready to get down to business and choose our 2013 SCH Gif Champion, so without further ado, I give you our two finalists.

First, Dave Bolland. In his first (and last, unless in an opposing uniform) appearance in the Gif Tournament, Bolly acquitted himself amazingly well. His Master Trolling swept through the early rounds in the Left Conference, but encountered some determined resistance with Seabrook's OT gamewinner against Detroit. Bolland's no quitter, though, and this gif dug deep, appealed to the seething mass of Blues-hatred in all of us and the latent schadenfreude inherent in every sports fan, and survived the brutal Conference Final to be here today.

I've said it before and I'll say it again: this flinch is epic. This guy practically leapt into another timezone to avoid Bolly's fake punch. And if you look at the kid in front of the One Goal sign in the audience, he's appreciating it too.

Defending the right side of the ice is a Hawks pairing that haunts the nightmares of opposition D and goaltenders, even in the offseason. When two of the very best in the world team up like Kane and Hossa do here, it feels like the stars have aligned, the fates have smiled, and the hockey gods have tapped the Hawks on the shoulder for that moment in time. Kaner fakes and taps a no-look behind-the-back pass directly to Hossa's tape. Hoss, down on one knee and perfectly in position, one-times it in. The Stars' D, caught flat footed, just stand there. The goalie weeps. The Hawks fans erupt in wild cheering. It's a thing of beauty, now and forever. It's Magic Panda, and they're all ours.

I have no idea how you'll choose. Only one can be champion, though, so vote early, vote often, and decide who the ultimate winner will be!