As August winds down and we start gearing up for training camp, lets take a last look back at 2013 before we clutter up the site with team previews and predictions. Please click on the links to relive our comments during each of these memorable games.

Share All sharing options for: Top Ten Games Of 2013, Part 1 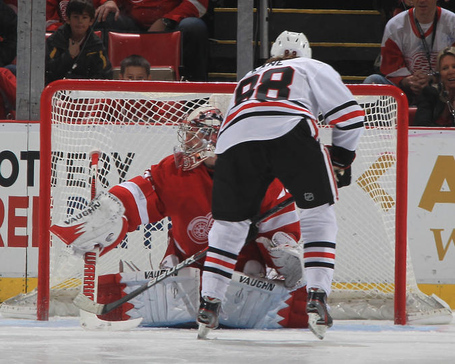 Our list, complied by the SCH staff, begins with a Sunday matinee at the Joe.  Patrick Kane saved the Hawks on national television and extended their now famous point streak to 22 games to begin the year.  Both goalies, Corey Crawford and Jimmy Howard were tested early and often but were up to the task.  An early 3rd period goal by Tomas Tatar put the Hawks' record setting point streak in serious jeopardy.  Kane would be the hero as he tied the game with a power play goal (that's right a power play goal!) with just 2:02 left in regulation.  He would also be the only player to notch a tally in the shootout with a sick move on Howard that made highlight reels worldwide. 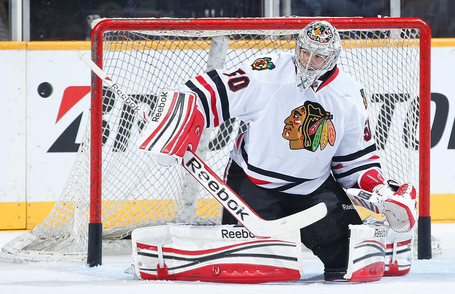 This was a huge night for the Blackhawks. Not only did they end a 6 game road trip in which they went 4-0-2, but it was the team's first shutout since 3/23/11.  Chicago goaltenders went a total 105 games, including the playoffs, since they had last blanked an opponent.  The social media world wondered if Corey Crawford would ever get another shutout so much that it spawned the "Did the Blackhawks get a shutout?" website.  Crow would only have to make 17 saves in the game but they all weren't easy.  Shortly after Jonathan Toews put the Hawks up 2-0, in the 2nd period, the Predators sustained their first serious offensive pressure of the game.  Crawford made big stops against Paul Gaustad and Colin Wilson during this sequence.  He also robbed Mike Fisher with a huge pad save in the 3rd period.  This was one of the early season games that set the tone for Crow and Ray Emery as they went on to win the 2013 Jennings Trophy, as the league's least scored on goalies. 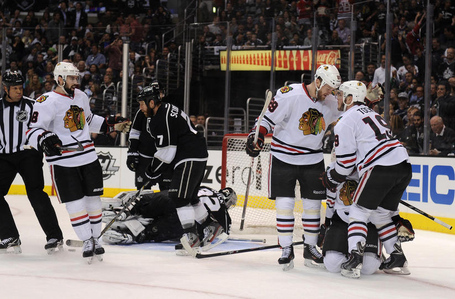 This is first playoff game of our countdown but certainly not the last, and not the last time we will relive a meeting with the Kings either.  The Hawks headed into Game 4 of the Western Conference Finals a bit shorthanded.  Duncan Keith was serving a one game suspension for his high stick on Jeff Carter in a Game 3 loss.  This was the type of game that could changed the outcome of the series and the entire season.  There is a huge difference between heading back to Chicago, for Game 5, either up 3 to 1 or tied and 2 games apiece.  The game didn't get off to the best start with the Kings taking the lead just 3:28 into the 1st period.  Having Keith's replacement Sheldon Brookbank on the ice for the goal did not give us much confidence in how the game was going to go. But the Hawks never backed down.  Marian Hossa broke a 2-2 tie just over a minute into the 3rd period and they were able to hang on for the 3-2 win to move themselves one win from the Stanley Cup Final.  This was one of many examples of why the Blackhawks were the best team of the NHL season.  They weren't just a collection of names on paper, they were a team that picked each other up time and time again. 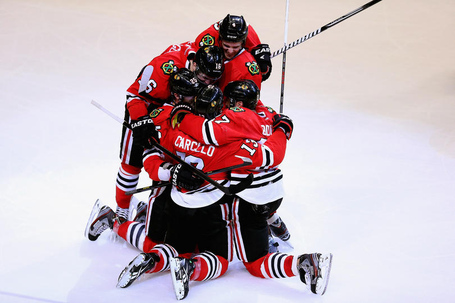 Who can forget the ending to the 24th straight game with a point for Blackhawks in 2013?  The Hawks came out a little sluggish after beating the Minnesota Wild 5-3 just 24 hours earlier.  Jonathan Toews erased a 2-1 Avs lead with a shorthanded goal just over 2 minutes into the 3rd period.  Daniel Carcillo would provide us with his only goal of the season with just 50 seconds left to extend the Hawks point streak to 24.  The streak would end two nights later to these same Avs, but this night was one of many where the Blackhawks felt unstoppable.  The celebration that ensued after Carcillo's goal was so great it landed on the cover of Sports Illustrated. 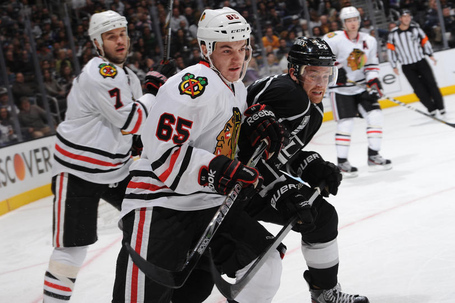 This was a very special game for many reasons.  Not only was it my first at Second City Hockey, but it was a game most of thought would never come during the long months of the lockout.  The Blackhawks started their 2013 the same way they finished it, with the Stanley Cup in the building.  One of the biggest question marks going into the season was the health of Marian Hossa.  It didn't take him long to show that he was feeling no ill effects from the concussion that ended his 2011-12 season the previous April.  Hossa scored 2 goals and added an assist in the 5-2 beating of the defending champs.  Daniel Carcillo injured his knee in the 3rd period which lead to the call up of Brandon Saad.  Who knows if and when Saad would have seen the NHL ice without Carcillo's gimpy knee. The Hawks gave us a small taste of what we were in for in 2013 with their dominating win over the Kings.

Be sure to check back for the second part of our countdown to see if your favorite game was ours too.