Today we relive the top five games of the great 2013 season, as voted on by the Second City staff. Probably not too many surprises at this point, but it is fun to go through the game streams and experience the moments as they happened.

Share All sharing options for: Top Ten Games Of 2013, Part 2 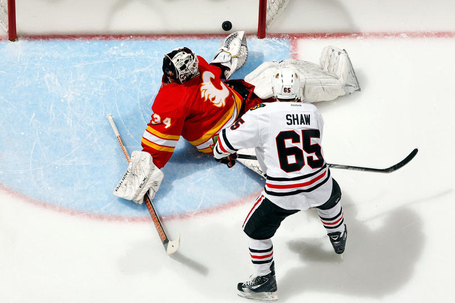 In my personal top ten I had this game ranked third overall.  To me, this was one of the most important games of the season.  Many in the Hawks locker room have said this was the night when things turned around and they really felt that something special was occurring.  This game had a little bit of everything; Ray Emery standing on his head, late game heroics, a Brandon Bollig fight and even a faceoff violation penalty, called against the Blackhawks of course.  This was by far the greatest night for Emery in a Hawks sweater.  He made 45 saves including 24 in the 3rd period alone.  The game entered the final frame scoreless but a Patrick Kane goal 4:08 into the the 3rd gave the Hawks a 1-0 lead.  The Flames tied the game about 13 and a half minutes later with a power play goal from Dennis Wideman. Jay Bouwmeester gave Calgary a 2-1 lead with just 35 seconds left in regulation.  Game over, right? Wrong! Marian Hossa would tie the game up with his 6th goal of the season with less than 3 seconds to go in the game.  Kane was the only player to light the lamp in the shootout to give the Hawks the extra point.  The Blackhawks would get a point in 15 more games in a row before suffering their first regulation loss of the season. 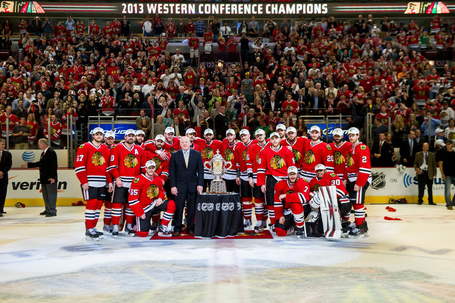 June 6th was a memorable night at the United Center as Patrick Kane's second career playoff hat trick propelled the Blackhawks into the Stanley Cup Final.  The Hawks had a 2-0 less than 6 minutes into the 1st period with goals from Duncan Keith and Kane.  The Kings' special teams got them back into the game with a short handed goal from Dwight King in the 2nd and a power play goal from Anze Kopitar in the 3rd.  At 16:08 of the 3rd, Kane put the Hawks up 3-2 and had the UC rocking but the Kings were not quite done yet.  Mike Richards tied the game with just 10 seconds to go in regulation and sent Game 5 into OT. The Kings out shot the Hawks 11 to 6 in the first overtime period but neither team could get the game winning goal.  At 11:40 of the second overtime frame Kane finished off a great 2 on 1 with his hockey soul mate, Jonathan Toews, for his 3rd goal of the night, giving the Hawks their second Western Conference title in four years. 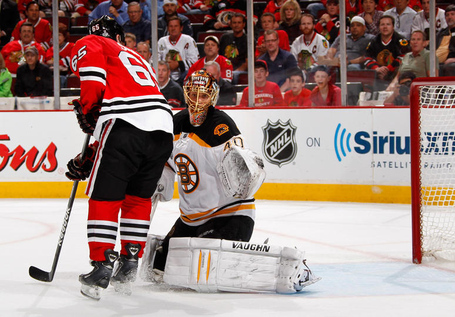 Ah the game that made "I f&$#ing love shin pads!" infamous. My head was swimming by the time the Stanley Cup Final finally got underway.  For the first time in my career I was a fully credentialed member of the media and between media day and pregame in the press room I was on cloud nine when the Hawks and Bruins took the opening draw.  Little did I know we were going to be treated to a classic game that ended with over 112 minutes played and a combined 117 shots on goal.  The Bruins took the life out of the United Center when they jumped out to a 2-0 in the 2nd period.  Brandon Saad cut the lead in half just moments after Milan Lucic's second goal of the game.  The Hawks found themselves down 3-1 with 13:51 left in the 3rd but if the 2013 season taught you anything it was that the Blackhawks were never out of a game until the final horn.  Dave Bolland and Johnny Oduya scored about 4 minutes apart to tie the game up and keep us all up for a very long and stressful night.  By the time the 3rd overtime started everyone knew it was going to take a dirty goal to end this game and who better to score that dirty goal but Andrew Shaw.  Shawzer got to the front of the net to defect a shot from Bolland past Tuukka Rask for the big Game 1 victory.  I was so tired at my "real job" the next morning but it was so worth it! 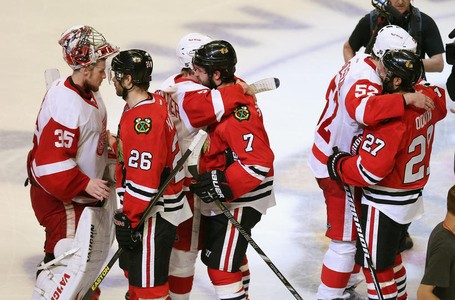 The Blackhawks were all but written off just six days before this classic game.  The Red Wings grabbed a 3-1 series lead after winning three straight games where they only gave up two goals.  Jonathan Toews was unraveling in front of our eyes and the Hawks looked dead and buried.  But lo and behold, the Hawks won Games 5 and 6 to force one final meeting with their long time rivals.  After a scoreless 1st period, Patrick Sharp got the Hawks on the board with a goal at 1:08 of the middle frame.  The Wings got back into the game with a Henrik Zetterberg goal just 26 seconds into the 3rd period. It appeared that Niklas Hjalmarsson had given the Hawks the lead at 18:13 of the 3rd period but the play was blown dead by referee Stephen Walkom who called coincidental roughing minors on Kyle Quincey and Brandon Saad.  The call was garbage because all Saad did was hold on for dear life as Quincey suplexed him into the ice.  Even Hockey Reference agrees that the call sucks because they still list the goal in the scoring summary.  Thankfully Brent Seabrook quickly ended our hockey anxiety just 3:35 into overtime with a nice little shot over Jimmy Howard's glove hand for the first ever 3-1 OT win in NHL history.  This was one of the most satisfying series wins of my lifetime, sending the hated Wings to the Eastern Conference and shutting up the "you never went through us" mouth breathers! 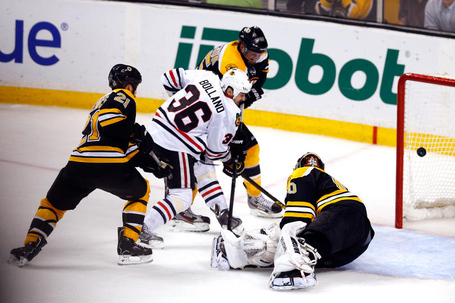 Is anyone surprised that this game is #1 on the list? The Blackhawks ended a dream season in possibly the most unbelievable way possible.  If you ever want a high five from a fellow Hawks fan between now and the end of time, all you have to say is "17 seconds."  What a roller coaster of a game that turned into the perfect ending for a season where the Blackhawks knew they could win any game, no matter what the situation was.  Corey Crawford had to make quite a few big saves in the 1st period just to keep the Bruins lead to only 1-0 after the 1st period.  Jonathan Toews tied the game up, at 4:24 of the 2nd period, after taking the puck away from Zdeno Chara a beating Tuuka Rask.  Milan Lucic broke the tie with less than 8 minutes to go in the 3rd period.  As the minutes starting ticking away I started to worry about Game 7 back at the United Center.  I knew that would be the last time I would ever be allowed in the Hawks pressbox since there was no way I could remain "neutral" during Game 7 of the Stanley Cup Final.  Then at 18:44 Toews found Bryan Bickell alone at the front of net and all of a sudden the game was tied at 2! And while most people at the bar I was at, and all across Chicago, was still celebrating Bickell's goal, the unthinkable happened.  Johnny Oduya's shot from the left point clanked off the post and Dave Bolland was in the right place at the right time and knocked home the rebound for the biggest moment of his career. I was stunned and couldn't believe what I had just seen.  Following the longest 58 seconds of my hockey watching life, the Blackhawks had achieved their ultimate goal.  My favorite part of the GWG will forever be Johnny Boychuk doing absolutely nothing to prevent it. Poetic justice my freints!