Outside The Box : The Pacific Division

We've spent the last couple of days hearing about the Pacific Division friends from our SB Nation friends, now it is time for an outside the box look at hockey's left coast.

Share All sharing options for: Outside The Box : The Pacific Division

I am thrilled to have one of my favorite hockey bloggers, The Royal Half, help us out with our Pacific Division preview. Enjoy!

The 2013-14 NHL Season is just around the corner... and us West Coasters are more excited than ever for hockey to finally be played the way it was meant to be... In a makeshift Smythe Division!!!

That's right, Smythe Is Back!!! Not quite... but you get the point. 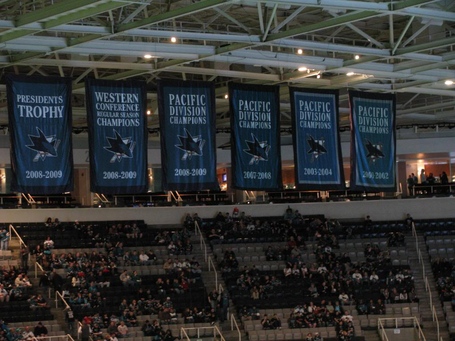 Turns out a Smythe Division banner was the only meaningless banner the Sharks haven't won.

Over the summer, the NHL made some big divisional changes so that better geographical rivalries could form across the Conferences. So they basically created a Division that includes California-based rivals LA Kings, San Jose Sharks and Anaheim Ducks as well as Western Canadian-based rivals Edmonton Oilers, Calgary Flames and Vancouver Canucks. And even in this new Division, the Phoenix Coyotes remain battling their greatest rival... For me, rivalries can't be made until teams face each other in the Playoffs. So this new Pacific Division has the potential to be full of awesome rivalries... from yesterday and today. In the late 80's and 90's, you had some great playoff battles between the Edmonton Oilers and Calgary Flames (Yes, I know the part about the Oilers and Flames being in the playoffs seems odd, but just go with it). In the last few years of playoffs, the Vancouver Canucks and Phoenix Coyotes have become bitter (emphasis on bitter) rivals of the LA Kings. San Jose and Anaheim just plain hate each other because they both live in the giant shadow of LA. And in 5 years, you'll have an amazing new rivalry between Vancouver and Seattle. Between the Battle of Alberta and the Battle of California... it's totally not hyperbole to say that the new Pacific Division is going to be the most awesomest division ever.

The NHL Store's official shirt for the Pacific Division.

Even more amazing than the rivalries in the Smythe 2.0 are the Head Coaches. Just take a gander at what us Pacific Bloggers have to work with this season: Okay, I know that Brian Burke isn't the coach in Calgary... but Patton Oswalt isn't an NHL coach and I still put him on this list.

And even scarier than the intensity of the Pacific Division Head Coaches... is the douchiness of the most hated players in the Division. But when it comes to the 2013-14 Pacific Division... the question isn't "Who is the best Coach?" or even "Who is the most hated player?" No... rather the question is "How many more points will each team have than the Calgary Flames?"

A huge thank you to The Royal Half for putting this together! Be sure to check out the blog, it is fantastic even if it all about the Kings. Be sure to follow him on Twitter, @theroyalhalf, to enhance your hockey season.