The 2013-14 NHL season is almost upon, so it is time to take a look at the three most pressing questions facing the defending Stanley Cup Champions.

1. Are the Blackhawks the NHL's first salary cap era dynasty?

It might be too soon to throw the word dynasty around but Stan Bowman definitely has the blueprint laid down. The Blackhawks are the first team to win multiple Stanley Cups in the salary cap era. The two first round playoff exits sandwiched in between the two Cups prevent me from calling them a dynasty. But, maybe that is what a dynasty is in the modern NHL. It is very hard for any team to win multiple Stanley Cups, under the new cap rules, let alone in back to back seasons. 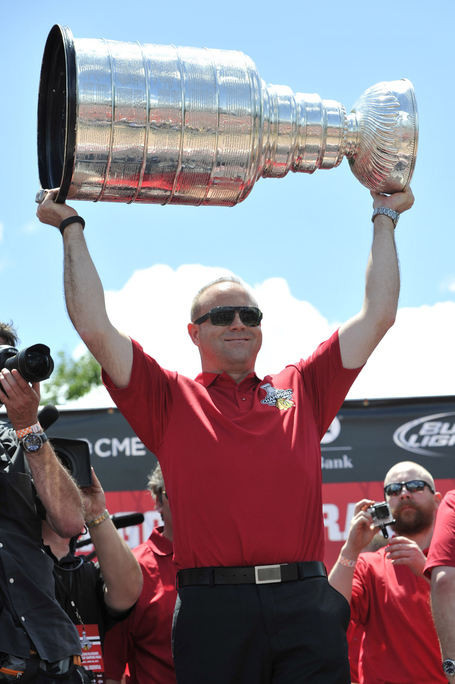 Blackhawks' general manager Stan Bowman has built the model for long term success in the salary era of the NHL. It really is not that much different from what the Detroit Red Wings have been doing for the last two decades. The Blackhawks, as an organization, have built this team through a number of strong drafts and developing their own talent. Last year's Stanley Cup winning team had 12 homegrown players on the roster including stars Jonathan Toews, Patrick Kane and Duncan Keith.

Bowman's philosophy is simple; your own young talent is much cheaper than any free agents who would be available in any given year. The Hawks had to say goodbye to forwards Dave Bolland, Michael Frolik and Viktor Stalberg this summer due to the salary cap. It is much easier to make these types of moves when you have good, young (and cheap) talent chomping at the bit in the AHL. Chicago will look to get contributions this season from some of their youngsters like Jimmy Hayes, Jeremy Morin, Brandon Pirri and Ben Smith.

2. How well will young players fill the void left by some offseason departures?

As mentioned above, the Blackhawks are using some of their own players to fill the void as opposed to paying for free agent replacements. The main players the Hawks will be relying on in 2013-14 are not as "wet behind the ears" as some may think.

Jimmy Hayes has 43 games of NHL experience including dressing for two playoff games. Ben Smith has played in 20 regular season games and his been counted on in the playoffs before. He was a last minute replacement for Marian Hossa in Game 3 of the Cup Final against the Bruins. Smith also became a folk hero when he scored the overtime goal in Game 6 versus the Canucks, back in 2011, sending the series back to Vancouver for a Game 7. Jeremy Morin and Brandon Pirri also have had some experience at the NHL level. 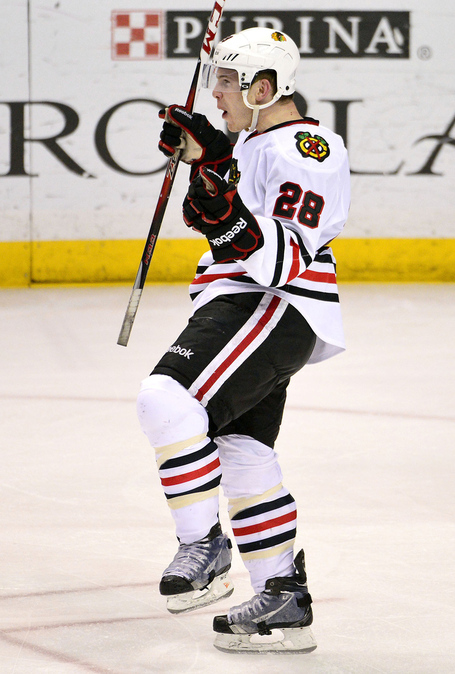 All four of them have already played multiple seasons with the Hawks' AHL affiliate, the Rockford IceHogs. They are familiar with the Blackhawks system and know what to expect out of the coaches. The transition to the NHL should be relatively easy, or at least I hope so. There will be no pressure on any of these players to be "the guy" in Chicago. They will be asked to fill roles and the more they respond and produce the more will be asked of them. One of those roles will be trying to replace Michael Frolik on the penalty kill, which I think Ben Smith is perfectly suited for.

3. What's the one big thing that could derail Chicago's repeat hopes?

My biggest fear is the team's overall health. 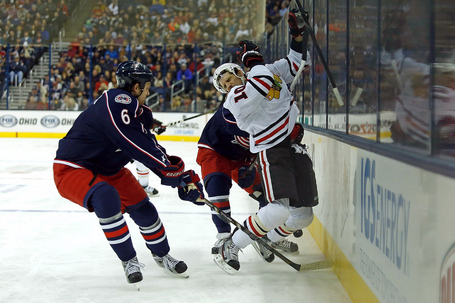 Jonathan Toews has had troubles with concussions in the past, including taking yet another shot to the head from Johnny Boychuk in Game 5 of the Stanley Cup Final last June. Myself, and most Blackhawks fans cringe every time the captain takes a hit up high.

Marian Hossa has had a bad back ever since last year's playoffs. It got so bad that he was a last minute scratch before Game 3 against Boston. He elected to not have surgery in the offseason and the nagging injury has caused him to miss all of training camp and the preseason schedule. Hossa is supposed to be good to go for the season opener on Tuesday but his health will need to be watched as the season progresses.

Patrick Sharp has had a few injuries, including a bum shoulder that has caused him to miss 57 games over the last 5 seasons. The Hawks have the depth to get by if any or all of them miss some games during the regular season. But, if they suffer a rash of injuries where multiple stars are missing during the same extended period of time, the Hawks could be in trouble.

If the Hawks are missing multiple players from their top six forwards and top two defensive pairings come playoff time I can't see another repeat happening. If the Hawks are healthy come opening faceoff of the post season, they are going to be very hard to beat in a seven game series.