With the release of NHL 14, that includes the NHL 94 Anniversary Mode, it's time to take a stroll down memory lane.

Share All sharing options for: The Song Remains The Same : A Look Back At 1994

I finally picked up my copy of NHL 14 and was very excited to check out the NHL 94 Anniversary mode. I remember getting NHL 94, for my Sega Genesis, on Christmas morning in 1993. For the next few months I spent many hours and missed many homework assignments guiding the Chicago Blackhawks to multiple Stanley Cups. This got me thinking about how much has changed, and yet some things never change, in the 20 years since the classic game's release. 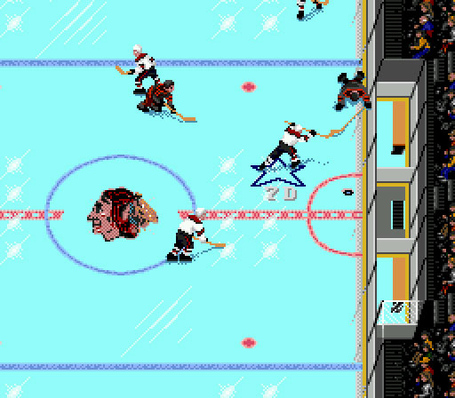 The 1993-94 season started with new conference and division names, much like we have this season. Gone were the Whales and Campbell Conference and in were the Eastern and Western Conferences. The Norris, Adams, Patrick and Smythe Divisions were renamed the Atlantic, Northeast, Central and Pacific. I have always hated taking away the historic names and replacing them with the generic names we still have today. The NHL had the chance to right this wrong over the summer but chose not to.

93-94 was also the first season under the direction of Gary Bettman. Shortly after the season ended, the players and fans of the NHL got their first taste of what Bettman does best; work stoppages. The Blackhawks finished 5th in the Central Division which was still good enough for the 6th seed in the playoffs. Back then the Central including the Dallas Stars and the first incarnation of the Winnipeg Jets, two teams that have rejoined the Blackhawks' division this season.

The Hawks lost in the first round to the Toronto Maples Leafs in a six game series. That's right kids; Toronto actually used to win in the playoffs! This was the season in which we were told to "Remember The Roar" as the Hawks played their final game at the Chicago Stadium on April 28th.

Hawks fans got to watch their former coach, Mike Keenan, along with other former Hawks Steve Larmer, Stephane Matteau, Ed Olczyk, Mike Hudson and Brian Noonan raise Lord Stanley's Cup as members of the New York Rangers. Shortly after Game 7 ended, Canucks fans took the streets of their beautiful city to loot and riot. See, some things will never change!

I loved playing as the Blackhawks on NHL 94 so much I didn't even get NHL 95 because Steve Larmer was not on the Hawks in that game. Larmer and Jeremy Roenick were deadly on the power play. Ah the memories!

Here are the Blackhawks ratings and roster from NHL 94 courtesy of NHL94.com.