Time to get an overview of Central Division from another guest blogger.

Share All sharing options for: Outside The Box : #ConferenceIII

Our final edition of Outside The Box, will look at the division that will forever be known as Conference III.  I am absolutely thrilled to have one of the biggest promoters of Conference III love, J.R. Lind giving us our final preview before the season starts tomorrow!

Have you ever carved your own chicken?

Buying a whole chicken and then slicing that bird up on your own is a great way to save money, plus dividing the fowl into usable pieces delivers the dual gifts of delicious dinner and self-satisfaction at a job well done.
Hack off the wings, split the breasts, saw off the legs — divide them into thighs and drumsticks if you want!

Now at look at what's left:

A bird skeleton, with various hunks of meat here and there.

Now, this corpse looks pretty much useless — suitable only to be heave-hoed into the woods, left as food for the raccoons. Despite what your vet told you about the dangers of serving chicken bones to animals, raccoons will take care of that chicken carcass, by the way.

But there's two things about the carcass. One, there's a secret little piece of meat in poultry called the oyster. It's the most delicious, most succulent and yet most ignored piece of bird meat on earth. It takes a careful hand and a knowledgeable brain to find and preserve the oyster, but, my is it worth it!

Second, a chicken carcass is leftovers, but it's good leftovers to have. It can be carefully boiled with herbs and root vegetables and various other kitchen trash, and honed and distilled down to stock — velvety, delicious and one of the most useful things to keep in the kitchen. Indeed, it can be used to make hot-chicken soup.

Conference III — the NHL dumbly calls it the Central Division — is that chicken carcass. After the league was divvied up, it was left with…us seven. But inside what looks like worthless remainders is delightful — almost secretly so — hockey. Hockey that can be used as the basis for a dragon's piss stew that can make your brain boil, singeing your gray matter into charcoal.

Before we get into the whys and wherefores, let's talk about this name. Central Division. How incredibly dumb and boring. The prime alternative — Conference III — evokes the stereotypical third-liner and, Lord knows, there's plenty of third liners in this division:

"But Conference III fits. In hockey, the third line is often composed of beloved and plucky — if skill-deficient — hard workers. The "glue guys," in the parlance. They eat minutes — just as Conference III gobbles up the less-desirable TV time — while still being far more useful than the face-punchers and gormless rookies on the fourth line. They bridge the gap between the shiny superstars and the truly worthless, much as Conference III is the bridge that connects this disparate league."

It's hard to argue against Joel Quenneville as being the best coach — two Stanley Cups make that an easy crown to hand out — but it's not like he's coaching against a bunch of Pierre McGuire's here.

With the addition of Lindy Ruff and Patrick Roy, no division in hockey boasts a more grizzled group of bench bosses. The only exception being Mike Yeo in Minnesota — who is sort of like the high-school track coach who tries to be as mean as the football coaches, but is really just play-acting at it, because his real passions are white wine and his secret stamp collection. If there was one overriding theme to the offseason in Conference III, it's that a number of teams tried to get ruder.
As if the division featuring David Backes needed more players to hate. Recognizing this, the Predators Rich Clune joined Twitter (and then turned it off and then on and then off) and amped up his one-man troll assault on the Dallas Stars, embracing the fact he is hated, unlike Ryan Suter, who so desperately doesn't want to be a villain, it makes it that much more frustrating. His confusion as to why Nashville hates him makes him actually more hateable.
Tyler Seguin is an appealing target for hatred in Dallas — sort of that swaggering in-mover who tries to horn in on the ladies. There's probably someone to hate on Winnipeg, too, but the chances are Kevin Cheveldayoff hasn't actually signed him yet. And everyone hates everyone on Chicago for no other reason than Chicago is so many light years ahead of the rest of the division. I do want Shea Weber to punch Patrick Sharp pretty badly and by "punch," I mean "encourage to move to Nashville." Not that Sharp would leave Chicago, of course, because it's Chicago and what they do is sign inexplicably great contracts. This summer, Little Bowman signed Niklas Hjalmarsson to a delightful five-year, $20.5 million extension. It was such a refreshing breath of reasonable air, it was almost unbelievable.

Matt Duchene's extension this summer was similarly onside. The Jets have Andrew Ladd for $4.4 million against the cap until 2016, which is a heckuva bargain, especially since the only thing to spend money on in Winnipeg is heating fuel.

A sneaky good contract is the deal the Predators gave Kevin Klein, who has slowly evolved from the target of Nashville's fan hatred (this kind of thing happened to Dan Hamhuis too — when you are the No. 3 guy behind Shea Weber and Ryan Suter, your mistakes are amplified simply because you aren't Weber or Suter) into a reliable second-pair guy and steady penalty-killer. Klein is signed through 2018 with a very manageable $2.9 million cap hit.
And that's important when the Predators are paying Shea Weber 90 gazillion dollars (estimated). Deals like Weber's and Suter's — signed (or matched) in the heady pre-lockout days — hang a bit like millstones. They are just fine now, with the guys in their prime, but you wonder what that looks like when they are in their early 40s. Duncan Keith is in a similar position.

There's plenty of reasons not to sign goalies to long, pricey extensions but this is division where Pekka Rinne gets $7 million per year and Crawford just inked for six more years at $6 million. Even those don't look bad when you consider the Predators are paying Eric Nystrom $2.5 million — a deal matched by the Wild with Matt Cooke.

It's all part of keeping up with the Joneses (or the Blues, we suspect). And when divisions get re-aligned, there's a whole new set of Joneses with whom to upkeep.

Because of historical animosity and because they are the two best teams, Blues and Blackhawks games should take on more meaning. Neither get to focus their ire on the Red Wings, so they can aim their guns at each other.
The Predators and Stars had a few tete-a-tete last year — we call the rivalry The Chambers Pot — and with Clune mixing it up, Dallas-Nashville games should be frenzied affairs. Barry Trotz hates the Wild for their Suter thievery, but the Wild are better off setting up a squared-circle dance with either old Northwest Division rival Colorado or the proximate Jets.

I feel a bit bad for the Jets in this pairing-off situation — which is not unlike the misfits, burnouts, stoners and A/V clubbers pairing off for prom — as they simply don't have the history to claim one of the other six teams as their target — although jilted Atlanta fans did demonstrate their anger a few seasons ago in Winnipeg's thus-far-only trip to Bridgestone Arena. And maybe the Jets can try to boil some hatred for the 'Hawks, since everyone who plays for Chicago is actually from Manitoba (even Michal Rozsival probably). 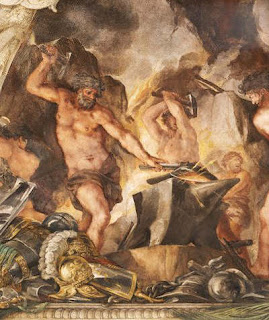 The playoffs, of course, are where rivalries are made and with the new sort-of in-division format, the forge will be fired up.

The new format benefits pretty much everyone in Conference III. Chicago and St. Louis could potentially face off against whoever crawls out of the morass and the other five teams simply have to be the third-best team in a two-man race. That crossover with the Pacific could prove problematic, as it means the fourth place team will have to be better than the fifth place team in a better division…but it's not like they'll be looking up at a juggernaut in third.

Here's how I see 'em finishing:
1) Chicago — duh
2) St. Louis —  They are the clear No. 2 here.
3) Minnesota — Some questions still, but probably the best of the rest
4) Nashville — SETH JONES
5) Dallas — I'm calling a dog fight in Conference III, especially in the three through five spots. Dallas comes up short in Lindy's and Jim Nill's first year.
6) Winnipeg — Not feeling it.
7) Colorado — Building a nice young core there on the mountain, but still a few years off.

Remember, gang: while most of the time we'll be at each other's throats, we also have to stand up for each other, too. We're the "Bastards of Young," as ConferenceIII's own The Replacements sang. The rest of the league is "unwilling to claim us." They're the ones who love us least...and I don't begin to understand them.

J.R. Lind, writing professionally for the Nashville Scene and NashvillePost and rather amateurishly at the world's foremost Conference III blog, III Communication.