A Point and A Save

The Blackhawks Lose In Overtime On Markov's Second Goal Of The Evening.

Share All sharing options for: A Point and A Save

Well that was perhaps more pleasant than a root canal. Maybe.  Maybe not. The first two periods for the Blackhawks were uninspired.  Corey Crawford, visiting his hometown was inspired. His play all evening was crisp and confident. For perhaps the first time this season, Crawford looked like the amazingly calm and confident goalie who led the Blackhawks to a Stanley Cup last season.  That's not to say Crawford hasn't played well this season, because for the most part, he has.  His save percentage has not been where the Blackhawks needed it to be, but tonight he really stepped up his game.

Crawford's save with the tip of his skate (kick save and a beaut) on Lars Eller was perhaps the most impressive save of the season.  Frankly, Crawford's performance tonight is the sole reason the Blackhawks walked away with even a point from this game.  So, in order to focus on the positive for another moment, let us all agree that Corey Crawford earned the Player of the Game honors tonight.

As for the rest of the team...nearly all of them deserve poor grades for their performances with very few exceptions.  Andrew Shaw had a strong game in terms of possession and shots along with his mates on the 4th line.  His line was also put on the ice against the Michael Bournival, Lars Eller, Brandon Prust line and the Max Pacioretty line in order to take some of the pressure off of the Blackhawks 2nd line.  While the first line of Marian Hossa, Jonathan Toews and Patrick Sharp did score a beautiful goal, they had to fight and claw for every puck all night against the Tomas Plekanec line and the P.K. Subban - Josh Gorges defense pairing.

Subban did do a fairly good job defensively against the top line; however, the boarding against Jonathan Toews was a lowlight of the night.  Even Subban realized what a bad play that was as the broadcast showed replays of him apologizing to Toews on the way back to the bench.  Hopefully, there will be no lingering issues from that hit in the coming days for Toews.

The second, third and fourth lines spent the evening switching players back and forth.  Bryan Bickell found himself benched for a good portion of the second period after a very strong showing in the last game.  Bickell redeemed himself with strong play in the third period.  Regardless of the benching, Bickell still managed to skate for nearly 12:00 minutes of even strength time.  He, Andrew Shaw and Ben Smith ended up with the best possession numbers on the team both at 5 on 5 and 5 on 5 Score Close.

Overall, this was a lackluster effort from the Blackhawks and an exceptionally nice effort from a motivated Canadiens squad.  They seemed to play with incredible effort on the forecheck and their neutral zone play was very good.  The Blackhawks could not seem to find their rhythm for much of the game due to stretch passes failing and thus the transition game plan being stifled. 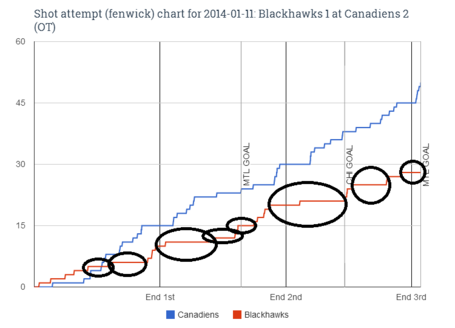 Those areas in the Shot Chart above (via www.extraskater.com with my additions) with the big plateaus are the key to understanding this game. Essentially, those areas represent all of the times that the Blackhawks failed to get a shot off that wasn't blocked.  Having studied every shot chart for every period of Blackhawks hockey this season, I can tell you that this is one of the worst if not the worst.  When the Blackhawks hit the late second period without a sizable lead, the shot chart usually takes off like someone added rocket fuel.  That obviously didn't happen tonight.

Tomorrow holds the Edmonton Oilers followed on Tuesday by the Colorado Avalanche.  These two teams are full of young offensive weapons that routinely give the Blackhawks fits.  Hopefully, the struggling defensive units of these teams will allow the Blackhawks to work back into their transition game rhythm.  Below are the incredibly depressing stats for the night.  Don't look at them for too long...you'll hurt your eyes.