The Curious Case of Bryan Bickell

With A New Contract And Decreased Ice Time Everyone Wants To Know What's Wrong With Bryan Bickell.

Share All sharing options for: The Curious Case of Bryan Bickell

After contributions during the playoffs last season that had some wondering if he might deserve consideration for the Conn Smythe Trophy, Bryan Bickell was rewarded during the offseason with a new 4 year contract worth $16 million.  It was revealed after the Cup was hoisted that Bickell had sustained a rather serious knee injury during the last game of the Western Conference Final that left the team doubting whether he would even be able to skate in the Stanley Cup Final.

He skated. He scored. He won.

This season, Bickell started out a little slowly and of course, people on social media pounced on this opportunity to bemoan what was obviously, after 10 or 15 games, a terrible contract for a terrible player. Shortly thereafter, Bickell was injured sliding into the goal post on November 19th against the Colorado Avalanche.  It was later revealed to have been a left knee injury and he spent quite a while on the shelf trying to heal.  It's no secret that he has been wearing knee braces to help his recovery from these injuries.  Bickell also had surgery on his left wrist over the summer.  Bickell revealed that he was going to have to continue wearing the knee braces for the remainder of this season and felt the braces affected his skating.  Miraculously, in the week or so since the "What's Wrong with Bryan Bickell" narrative came to life, Bickell no longer needs one of the braces and is now only skating with one.

Bickell has admitted that he has been playing more cautiously than he probably needs to including being less physical.  If you recall, throughout Bryan Bickell's time with the Blackhawks, he has been hesitant at times to be as physical as the organization wants him to be.  Add that natural tendency to his overly publicized confidence issues right now and you end up with the appearance of a fragile player and a tantalizing target.  Coach Joel Quenneville has periodically cut Bickell's ice time since his return from injury in late December and criticized him to the media.  Bickell was notably absent from the ice for the third period of the Blackhawks January 5th meeting with the San Jose Sharks.  Quenneville is known to "motivate" players in this manner and told reporters recently that he expected more from Bickell.

At least the initial results of the benching seem to be positive.  His performances in the games since have been very strong in terms of possession even if he has not scored.  With players that the fans trust to be prolific scorers, such as Patrick Sharp or Marian Hossa, this would merely be a case of being "snakebitten". With Bickell and the public need to determine immediately whether his 4 year contract is simply bad or the worst in the history of the organization, he will get no such benefit of the doubt.

While the team and fans may expect more from Bickell because he signed a contract, perhaps these expectations are a bit out of touch with reality.  Bickell's new contract was based upon known performance over several seasons.  Certainly he made what were likely very earnest promises to score more goals or die trying and hit anything that moves, but to think that the very business savvy management of the Chicago Blackhawks shelled out millions of dollars based upon the promises of a lovable player who would rather be fishing is simply foolishness. 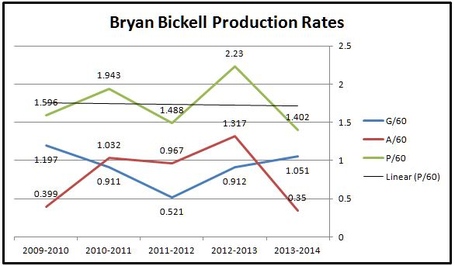 Over his career with the Blackhawks, Bickell has maintained, even into this season, a rather steady Points Per 60 rate.  His current Goals Per 60 rate is on the mark with previous seasons as well.  The only real fall off this season is in his assists.  There are several explanations for this but all of them come down to timing and chemistry for a player like Bickell.  Those have been hard to come by for him since returning from a lengthy time spent healing up injuries and bouncing from line to line. 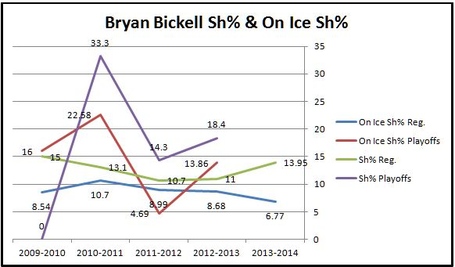 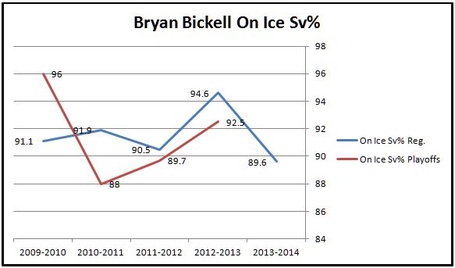 The regular season On Ice Save Percentage for 2013-2014 is noticeably lower than the previous seasons, which is a bit curious when paired with Bickell's possession numbers.  His possession statistics indicate fairly consistent performances despite a few off games so this might be more of an indictment of the defense and/or goaltending. 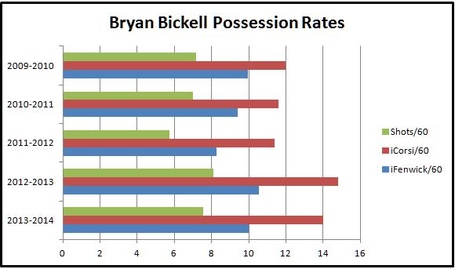 Bickell's possession rates last season and this season show increases over those earlier in his career, and his individual numbers on a game by game basis this season are consistent with his teammates. 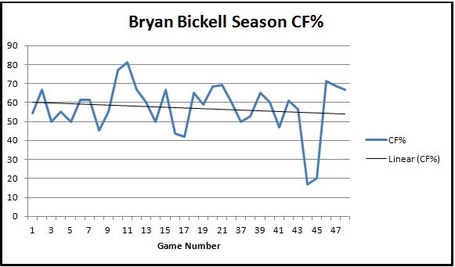 As you can see in the chart above, after returning from injury, Bickell continued to perform as he had earlier in the season.  Games 44 and 45 of the season were completely different from any other performances we have seen from him and he quickly rectified that situation by bringing his possession time back up.  It is also important to remember that this graph is considerably smaller in terms of games played than the majority of Bickell's teammates due to his injury time.  Every outlying performance is magnified by this.

In the games since being benched in the third period against San Jose, Bickell has put up sparkling possession numbers and while this is obviously a small sample size upon which to defend him, it is also a small sample size from which to condemn him.  The team possession statistics charts for the last four games (all since the San Jose game benching) are below.  Usually, a good indicator of game by game performance (or at least the best one we have in terms of possession) is the Corsi For Percentage (CF%) at Score Close (+/- 1 goal in 1st & 2nd periods, tied in 3rd period).

Bickell has been at or near the top of the team in possession categories for all of these games.  His TOI only dropped when Michal Handzus was moved out of his 2nd line center position and had to be plugged in elsewhere as a center.  A popular position this season has been to defend the offensive production of players such as Patrick Kane (who really needs no defense but obviously was limited by being centered by Handzus) and Kris Versteeg with the notion that Handzus is not as spry as he once was and thus less effective.  This may be true, but applying this logic more evenly may help us all avoid overreacting to the "what's wrong with Bryan Bickell" narrative.  How he is expected to produce excellent results without being on this ice very much is a mystery.  Handzus is more likely the limiting factor in terms of ice time.  While a smart and experienced player, he is older and perhaps not as capable of logging the heavy minutes that we as fans would expect from players like Bickell and Versteeg.

In light of all of the data available on him, it would appear that Bryan Bickell is going to be just fine.  He may be dealing with a banged up knee, but frankly, he is on pace to score goals at the same rate he did last season.  His assists will likely even out once he feels more comfortable with his line combination.  The thing that will help Bickell the most at this point is the death of the narrative de jour, specifically that he has no confidence, his knees are shot and his contract is terrible.

It may be time for the hockey community to embrace the fact that player salaries are going to go up rather dramatically in the next few years along with the salary cap itself.  This will necessitate an adjustment to what the general public thinks is "fair" or a "good deal" for players of various calibers.  In Bickell's case, it is also helpful to remember that he had offers in other cities for more money and/or term.  Perhaps recalling the endearment we as fans had for him a mere six months ago would help us be a bit more patient with regard to his offensive production woes, whatever they may be.  That is probably folly to even think about since sports is a "what have you done for me lately" type of business, but it bears repeating nonetheless.

With all of the pressure a new contract brings and a return from injury, many may be ready to write this year off in terms of what Bryan Bickell is going to bring to the table.  Seemingly every day, another quote or interview regarding Bickell's confidence issues comes out.  Nothing hurts your confidence more than having it constantly questioned.  Regardless of the reason for the decreased ice time Bickell is seeing, the Blackhawks have not been playing their best hockey as we reach the midseason grind before the sprint to the playoffs.  Whether Bickell will reach the level of production Quenneville wants from him is up for debate, but placing the organization's worries about a bit of a decrease in midseason team play at Bickell's feet is completely unfounded.