A Midseason Look At The Blackhawks' Defensive Pairings & Possession

Share All sharing options for: A Midseason Look At The Blackhawks' Defensive Pairings & Possession

The Blackhawks have reached the midway point of the season and much has been made of the recent slip in the overall play of the team. Many fans and members of the media seem a little jumpy about the defensive play and there are certainly some glaring differences compared to last season. The lockout has likely thrown off our inner season-measuring clocks, so a look at how the team has performed with regard to possession at the midpoint of the season will hopefully help prepare all of us for the race toward the playoffs.

In a regular length season, a midseason slump or slip in the quality of team play is a common occurrence. Be it fatigue, boredom, burn out or a lack of focus; this point in the season often brings with it a call to get back to the kind of hockey that has made the team successful. For the Blackhawks, successful hockey starts with the defensive pairings and their sizeable role in the offense. As far as defensive play is concerned, the top two pairings of Hjalmarsson/Oduya and Keith/Seabrook are talented and reliable. Yes, sometimes they make mistakes or have a rough game, but on the whole, the Blackhawks are fortunate to have two number one pairings on the blue line. Many teams in the NHL barely have a single blue liner who could be considered a top pairing type of player. With this in mind, instead of focusing on the defensive technique of the players, I want to address their contribution to the puck possession game the Blackhawks prefer to play.

The third pairing for the Blackhawks has been in a constant state of flux this season. Nick Leddy has played every game but his partner has been a rotation of Michal Rozsival, Michael Kostka and Sheldon Brookbank. The fact that the team has retained 8 defensemen on the roster for the season is certainly a sore subject particularly in light of the everlasting struggle to find a second line center. Much debate has gone on about what to do with Kostka and Brookbank in order to free up a spot for a forward to be called up. At least at this time and without any knowledge of impending trades, it does not seem like the organization is willing to send Kostka to Rockford so we are likely stuck with the defenseman filling in at wing whenever a forward is out.

Nick Leddy is the real victim in all of this uncertainty. He has no ability to form any sort of chemistry with his defense partner when that person is always different. Leddy is a very young player still learning the game. He is an unbelievably good skater and seems to have good instincts for his position; however, like any young player, he does make mistakes.

Click on the graphs to see a larger image. 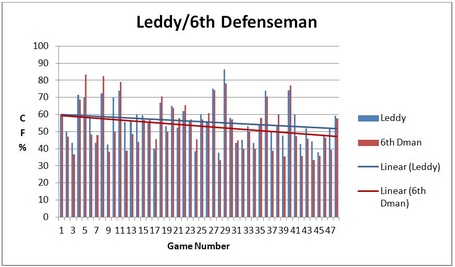 Leddy started the season near a 60% CF% but has been declining in that regard to right above 50%. For a third pairing defenseman, this is still a good percentage; however, when his partner is factored in, the decline in possession is more pronounced. With Kostka being out for an extended period due to injury, an already small sample size gets even smaller, but this is what we have to work with. I filtered out games in which Brookbank played at forward so that the numbers would not be skewed. So far, the ice time among the three has been split up as seen in the chart below. Rozsival plays longer minutes on average in a game than his two counterparts do, which likely says something about the trust factor that Coach Joel Quenneville has in his three 6th defenseman options. 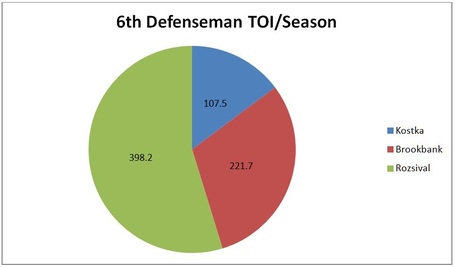 It is interesting to note that at even strength, all of the other defensemen for the Blackhawks have more time on ice individually than these three do combined. Now that we know that Quenneville favors using Rozsival, we can look to the possession numbers for a possible explanation, always remembering that the Blackhawks high powered offense is reliant upon the defensemen activating into the offense. I've broken down the 6th defenseman by player so that we may see how each of them has performed over the season thus far. 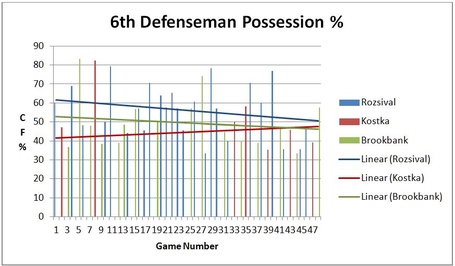 As with Leddy and the other defenesemen as we will see later, a downward trend is the norm for the team at this point in the season. Call it the grind or whatever you prefer, but it is apparent from all of the defensive pairings. The only exception to this is Michael Kostka. His possession numbers are trending upward. This may be due to his lengthy injury and recent return to the lineup or even that he is still learning the Blackhawks system. Even with this improvement, Kostka is barely averaging above 50% in Corsi For Percentage (CF%). Sheldon Brookbank started the season above 50% in possession but by about one third of the way into the season, he had fallen to the break even mark.

Michal Rozsival's possession numbers have followed fairly closely with Nick Leddy's up until this point of the season. While trending downward, he has not fallen below 50%. Again, this is positive news for a third defensive pairing. The best case scenario for the third pairing would be to use the Rozsival/Leddy combination as much as possible. Perhaps the plan is to keep Rozsival, an older player, fresh for the playoffs. It is anyone's guess at this point. At any rate, the third pairing averages the lowest ice time of the defensive pairings, is on the ice against the lowest Quality of Competition and with the lowest Quality of Teammates.

*includes games playing as defenseman only

Niklas Hjalmarsson and Johnny Oduya are often referred to as the second defensive pairing for the Blackhawks. This is probably a bit misleading as they have been the "shut down" defensemen this season. They have faced the toughest Quality of Competition nearly every night. The less offensively minded of the two top defensive pairings, Hjalmarsson and Oduya have been frequently paired with the second and third lines. Of course, they get their share of minutes with the first line, but they are strategically used to shut down the top lines of the opposing teams.

Their zone starts are less sheltered (less starts in the offensive zone) than the Keith - Seabrook pairing. Their reliability against tough competition allows the team to use the "first" pairing as part of the bigger offensive scheme. The second pairing possession numbers have been better than one would regularly expect given the competition they face. 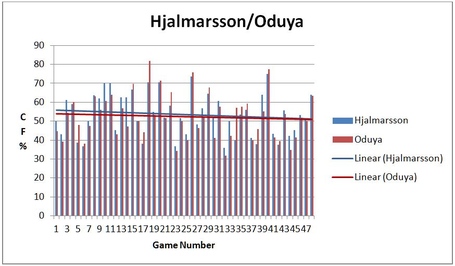 Their downward trend from the start of the season has been relatively slight particularly given the heavy minutes they log both at even strength and on the penalty kill. As with any defensive pairing, they sometimes make mistakes, but for the most part they are very reliable and obviously, Quenneville trusts them on the ice in any situation.

Duncan Keith and Brent Seabrook are widely regarded as one of the best defense tandems in the NHL. Their play goes far beyond defense as they are both very active in the offensive system the team employs. Keith is one of the most dynamic skaters in the league. Seabrook, in terms of defense, is more of the stay at home defenseman, but after watching even one Blackhawks game, it is obvious that the team really doesn't have those. Seabrook brings the more physical element to this pairing but is very active in the offense. Both defensemen will pinch to keep the offensive play going which often leads to positive results. Occasionally, and of course most notably, the pinch goes horribly wrong and leads to an odd man rush or breakaway for the opposition.

This season, Keith and Seabrook have had their time being utilized as the team's top shutdown pairing scaled back. Those duties have often fallen to the less offensively inclined pairing of Hjalmarsson and Oduya. While Keith and Seabrook still face tough opponents, Quenneville has chased matchups that will allow them more room to activate offensively. It is no surprise to see the Blackhawks defensemen down below the goal line or posting up by the net during the cycle. This plan has met with success this season as both Keith and Seabrook are posting extremely good offensive numbers. They are often on the ice with the first line of Sharp, Toews and Hossa, which almost seems unfair. Almost. 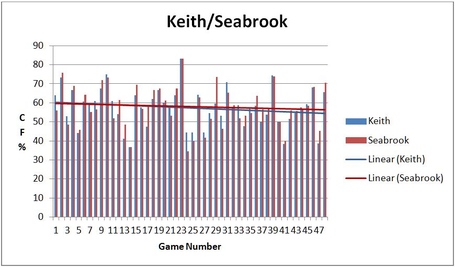 As with the other defensive pairings, there is some drop off in the possession numbers but it is very small. Both defensemen continue to be near the top of the team's possession leaders from game to game. Their zone starts are on average a bit more sheltered than the Hjalmarsson - Oduya pairing in order to optimize their offensive production; however, they remain around 57% O/Dst%.

At 5v5, Seabrook and Keith are third and fifth respectively in the league in CF%. At 5v5 Score Close, Seabrook and Keith are third and fourth respectively. The only defensive pairing ranked higher than them is that of Jake Muzzin and Drew Doughty from the L.A. Kings. At 5v5 Tied, Seabrook is second in the league with a CF% of 61.4% and Keith is fourth with a CF% of 60.8%. Given that Keith and Seabrook often carry the heaviest minutes game in and game out, their continued ability to provide offensive strength by driving possession is an integral part of the Blackhawks' success.

*All data retrieved from www.extraskater.com