Blackhawks Choke One Away In The Third.

The Blackhawks give up three goals in the 3rd period and lose to the Jets 3-1.

Share All sharing options for: Blackhawks Choke One Away In The Third.

When you let a team stick around in a game they have no business of begin in, you run the risk of suffering a crappy loss much like the Blackhawks did Sunday night.  The Jets played an overtime game last night, got delayed coming to Chicago, looked lost for the first 40 minutes and yet walked out of the United Center with two points.

The 4th line got the second shift of the game, nothing new from Q, and they turned it into the first goal of the night.  After an extended period of time in the Jets' zone, Brandon Bollig put a quick wrap around shot off the paddle of Al Montoya and into the net.  Ben Smith and Marcus Kruger assisted on Bollig's sixth goal of the season.  That would be the only goal of the 1st period but the Hawks could have had a couple more.  The Jets didn't get their first shot of the game until the 10:14 mark of the period and were outshot 18 to 2.

The 2nd period was more of the same.  The Blackhawks dominated the play and outshot the Jets 9 to 4.  The Hawks had two chances on the power play but could not extend their lead.  The Jets had a couple of good rushes late in the period but Corey Crawford was able to make the saves.

Apparently the Jets and Blackhawks switched uniforms during the second intermission because Winnipeg kept the puck down in the Hawks' end for most of the 3rd period and dictated the game.  Shortly after Patrick Sharp was stopped on a breakaway the Jets tied up the game.  The Hawks could not clear the puck and Blake Wheeler was able to put a rebound back into the net for his 20th goal of the year at 8:16.  Winnipeg grabbed the lead at 12:53 after an awful turnover.  Marian Hossa passed the puck from the boards to the middle of the ice where the only player there was Andrew Ladd.  A quick wrist shot over the glove hand of Corey Crawford gave the Jets 2-1 and Ladd his 12th goal of the season.  Wheeler would ice the game with an empty net goal in the final minute.

* The Blackhawks are at their best when they roll four lines.  They are only rolling three lines these days.  The 3rd line stinks right now.  It was at it's best when Andrew Shaw was centering Brandon Saad and Bryan Bickell.  Ever since Shaw and Saad got bumped up to the 2nd line, this line has disappeared.  I have no problem with scratching BIckell tonight.  My problem is playing Michael Kostka at right wing.  Kosta barely qualifies as an NHL defenseman, let alone a foward.  Enough with the eight defensemen and bring up another foward.  Bringing up Brandon Pirri or Jeremy Morin gives you more flexibility.  You can rotate the players in and out of the 3rd line depending who is playing the best and who is struggling.  You will also be able to give Michal Handzus and Marian Hossa nights off down the stretch because they will need them.

* Corey Crawford only had to face six shot in the first 4o minutes but got bombarded with 15 shots in the 3rd period.  Crawford would have faced less shots but he had zero rebound control in the final 20 minutes.  Every shot was bouncing off his pads and seemed to find a Winnipeg stick.  Crow needs to make the save on Ladd's game winning goal.  The puck was deflected ever so slightly by Duncan Keith but he has to bail out his teammate in that situation.  Still, the Jets had no business being only one goal down going into the last period.

* We have been seeing some strange plays from Marian Hossa of late.  He had back to back games with frustratiion penalties, which is not what we are used to seeing from him. Hossa's dumb pass to the center of the ice cost the Hawks two points on Sunday.

* I like what I have seen from the Ben Smith/Brandon Saad combination on the penalty kill.  They did a great job of pressuring the point and taking away the passing and shooting lines.  This is exactly what Michael Frolik and Marcus Kruger excelled at last year when the Hawks had the best PK in the game.

* The last time the Hawks played a full 82 game schedule, this was right about the same time in the year that the Hawks went on a nine game losing streak shortly after taking over the top spot in the NHL standings.  I am going to have to research past seasons and see if this is a common occurrence or just a weird coincidence.

* Enjoy the advnaced stats below. It's one of those nights that make you scream "CORSI IS STUPID!!" 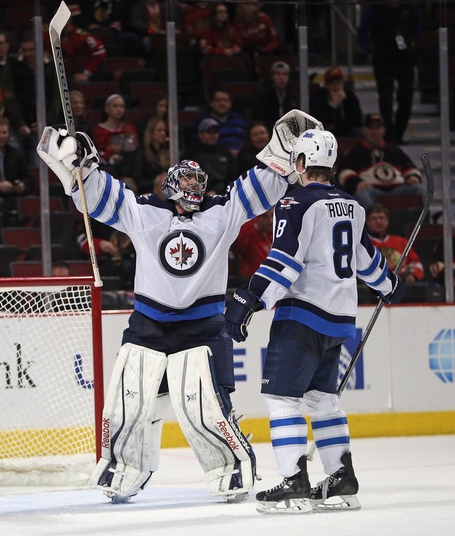 No doubt that Al Montoya was the biggest reason for the Jets win Sunday night.  He came up with 34 saves including 17 in the 1st period when the Hawks had plenty of chances to put this one a way early.  The biggest question I have is how has Montoya not beaten out Ondrej Pavelec for the starting job yet?