Brandon Pirri is set to rejoin the Blackhawks for the west coast trip.

Brandon Pirri has been recalled in advance of the Chicago Blackhawks road trip out west leading into the Olympic break. Pirri was up with the Blackhawks until early December when he was sent back to the Rockford IceHogs.  Due to Nikolai Khabibulin being on LTIR, the Blackhawks have been carrying 22 men on the roster. At this point in the season, the roster is capped at 23 players so no corresponding move will be necessary to accommodate Pirri.

Before his demotion, Pirri had spent several games playing in the second line center spot. He was shuffled around a bit before he was sent back to Rockford.  Coach Joel Quenneville explained that while the team was happy with Pirri's offensive contributions, they wanted him to improve the defensive side of his play.  Shortly after rejoining the IceHogs, Pirri was injured when he slid into the boards awkwardly.  He spent nearly a month out of Rockford's lineup as a result and only returned to game action this past weekend.

With Bryan Bickell having been in the press box as a result of a healthy scratch in the Blackhawks game against the Winnipeg Jets this weekend, there has been some speculation that this move may be related. There has been no word on whether Pirri will be in the lineup for tomorrow night's game with the Calgary Flames. It would be surprising to see Pirri inserted into a line that Quenneville already has concerns with defensively, so it is likely that the line centered by Michal Handzus will not be his destination if he gets a chance to play.  The other option would be to sit Handzus in favor of letting Pirri center the "doghouse" line with Bickell and Versteeg as his wings. We shall have to wait and see.

In the meantime, below are Pirri's stats from his time with the Blackhawks earlier in the season for your consideration. 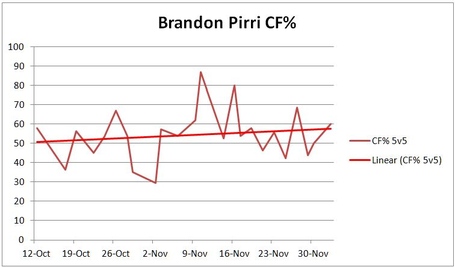 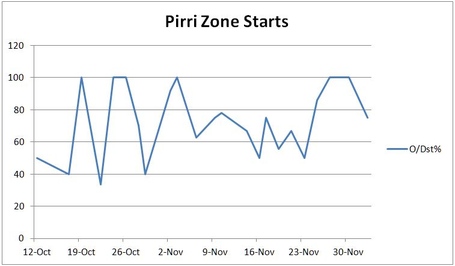