This is a weekly feature that will run throughout the season on Mondays (and sometimes on Tuesdays). It will briefly recap the last week, preview the upcoming week in Chicago Blackhawks hockey and look at where they sit in terms of playoff contention. Additional snippets, notes, content, blurbs and oddments are subject to change week-to-week. If there is something you want to see included in this, lemme know and I will see what I can do.

So last week I said "any talk of a 'slump' at this point is unfounded." I am dumb and bad and wrong because the Chicago Blackhawks are definitely in a bit of a funk. January has not been kind to the Hawks, as they have only three regulation wins all month. It will not get much easier as the Blackhawks begin a six-game road trip right before the Olympic break. I do not think this slump is anything super alarming, but there are some legitimate concerns to be had regarding the team, such as a bit of a goal-scoring slump from Kane and Toews, coach Joel Quenneville's insistence on screwing with the lineup, carrying eight defensemen and no extra forwards as well as an inability to put teams away. And you have to wonder how the Olympic break is going to affect the team, given the Hawks will be sending 10 players to Sochi, Russia. Maybe it is just a little bit of the "Cup hangover" that many teams face following a long summer. If so, hopefully it is nothing a couple extra days of rest sprinkled throughout the rest of the year cannot take care of. If there is anything Quenneville has done well the past couple of years, it is give his players ample rest. Moving on.

The Blackhawks lost a doozy to the Red Wings 5-4 in a shootout on Wednesday, and then lost a 2-1 stinker to the Minnesota Wild the very next day. The Blackhawks could not put the Winnipeg Jets away on Sunday and lost the game 3-1. Not a very good week.

There are three games this week. The Blackhawks kick off the road trip against the Calgary Flames on Tuesday, visit the Vancouver Canucks on Wednesday and tilt with the San Jose Sharks on Saturday.

I will not preview this week's game against the Calgary Flames because this will be going up during the game, thus useless to preview. Sorry about it.

The once heated rivalry seems to have died down a bit, but I have a feeling old feelings can reemerge in this game that both teams would love to have after each has hit a slump. The Canucks will be without head coach/human volcano John Tortorella, as he was suspended 15 days for going after Flames players in a mid-January game in Vancouver. The Canucks do not score a lot but they are still a decent possession team. They sit ninth in the league in 5v5 FF close percentage at 52.4. It is nice to be out-shooting the other teams more often than not, but it helps to put the puck in the net every now and then. 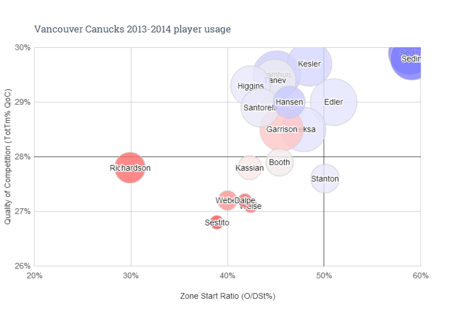 Henrik and Daniel Sedin have finally started to slow down after years of otherworldly numbers. They each have 40 points because of course the Sedins have the same number of points. They put up great possession numbers but they benefit greatly from almost 60 percent offensive-zone starts. The next-highest point-getter on the team is forward Ryan Kesler with 33 points. Kesler is deployed against some of the toughest opposing competition and does an alright job, possession-wise. He currently has a 51.6 percent CF.
If the all of Blackhawks players can make it out of this game without getting annihilated by Tom Sestito, that would be considered a good thing.
Goaltender Roberto Luongo is having another solid season for the Canucks, saving 92.4 percent of the even-strength shots he faces. Luongo has not faced the Blackhawks outside of Rogers Arena since 2012.
Full fancy stats can be found here.

The Sharks have moved up to second in The Other One. They are still playing some great hockey, and this should be a fun tilt for Sunday. San Jose plays a fantastic possession game and currently sit third in the league in 5v5 FF close percentage at 54.6. They kill penalties at an 84.1 percent clip and and are sixth in the league in goals per game. They are a good hockey team, imo. 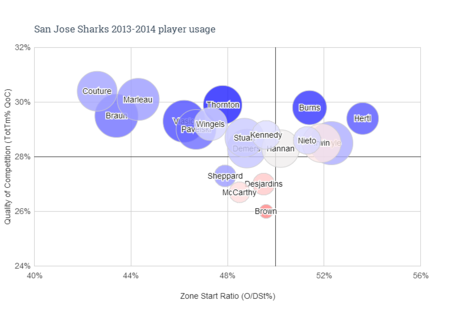 The Sharks are going to come at you and come at you and come at you. They lead the league in shots per game and are seventh in shots against per game. Joe Thornton, Joe Pavelski, Patrick Marleau, Logan Couture and Brent Burns pace a San Jose offense that has been dynamite this year. On the back end, Marc-Eduoard Vlasic, Brad Stuart and Justin Braun have played rock-solid defense on the San Jose blueline. Even Dan Boyle has begun to play like the Dan Boyle of old.
The last time these two teams played each other on Jan. 5, it somehow was not the visual barnburner people expected to be. I have a hard time believing this game will not be more exciting than the last one. Hopefully, this one is more exciting than the last with a different result.
Full fancy stats can be found here.

Player to watch this week

Brandon Pirri - The young forward has been called up again after a long stay in Rockford. Thankfully, Pirri is the savior and the answer to all of the Blackhawks' problems. Thank based god he will also be playing defense with Keith and Hjalmarsson as well as centering Patrick Kane for a couple of games before Quenneville gets impatient and throws Michael Kostka out there between Kane and Kris Versteeg. Pirri's offensive prowess should finally give Kane the center he has lacked for quite some time. Pirri has driven possession at a decent rate in the time he has seen with the big club this year and it should be neat to see what he can do being placed back in the role Hawks fans have clamored for him to fill for a while.

The St. Louis Blues have finally been able to take advantage of some of their 30,000 games in hand and the Blackhawks' recent stumbles. As of the time of this writing, they have overtaken the Blackhawks for the Conference III lead. Still just under thirty games left in the season, so this race is far from over by any stretch of the imagination. Watch for the Dallas Stars to make a late-season run at the Minnesota Wild's playoff spot.

#Cool thing of the week

Bell phone company will donate over $5 million to mental health initiatives because of efforts from people like you - yes, you! It pledged to donate 5 cents for every text message sent, mobile and long-distance call made, tweet using #BellLetsTalk and Facebook share of its "Bell Let's Talk" image. The tracker for number of communications can be found here.

Nebraska "fun" fact of the week

The Nebraska state bird is the Western Meadowlark. It appears on Nebraska license plates along with the state flower, Goldenrod.

A milestone along the road