Blackhawks right the ship against Canucks

Share All sharing options for: Blackhawks right the ship against Canucks

The game started out with a real wet fart when 16 seconds in the Canucks forecheck won a board battle and Chris Higgins slid a backhand underneath Corey Crawford to put the Canucks 1 up. But the Blackhawks would find their flow and over the next 18 minutes the Hawks would have a plethora of good chances on Bobby Lu. The fourth line came out and had a real nice shift to get the Hawks back on track. The pressure continued, and Luongo didn't look comfortable especially after taking a Duncan Keith shot to the shoulder. The best opportunity came after Toews sent a brilliant long bank pass finding Hossa streaking in by his lonesome. Jesus Marian Hossa couldn't convert, and the score remained 1-0. A chintzy hooking call on Oduya would give the Canucks a late power play, but was snuffed out. The last two minutes was a veritable shitshow as the Canucks peppered Crawford with a late push. Crow stood tall and the period would end with just the early marker.

The second started with another gassy blast when Kris Versteeg tried to do about five different things with the puck while deep in his own zone. The eventual DAMMIT VERSTEEG turnover would lead to a wide open Sestito to score the second Canucks goal just under 3 minutes into the middle frame. Not a good shift for Steeger. A play like that usually results in riding the pine pony, but he would redeem himself by setting up Hossa on the power play a few minutes later. A real nice play by all three forwards as Saad sent a slippery pass through the box and Steeger was able to tap it right to Hossa for the wide open net. More of this always. The pace picked up after that and the back and forth action game really got going. The Blackhawks would tie the game at 2 all when Brandon "The One True Gaad" Saad redirected a Brookbank point shot passed Luongo. The Blackhawks went into "can't stop, won't stop" mode as they took the lead a little over a minute later when a Seabrook pass from the corner would bound over Canucks sticks and find Toews waiting to punch it in. The Hawks would score their fourth unanswered goal when Sharp sniped one past Luongo. Couple things happened here. After a drop pass, Toews drove the net hard to draw attention and free up a lane for Sharp. By drawing the defenders low, Alexander Edler ended up partially screening his own goalie. Solid, solid hockey from Captain Serious resulting in a 4-2 lead.

The third didn't have the fireworks of the previous period, but the Blackhawks keeping the pressure up was crucial to the victory. After the first 4 or 5 minutes, the Canucks looked sapped as the Blackhawks possessed the puck. The fourth line had a beautiful shift where they hemmed in the Kesler line for at least a minute. Can't really say there were that many memorable moments in the third, but it certainly showed who is the deeper team. Empty netter from Saad to put it at 5-2. Oh, and there was some late game dickbaggery from noted crumb bum Ryan Kesler because of course. Hey, I don't have to like him until the Olympics start.

- Pretty meh game from Handzus. Ten minutes TOI, 1 of 5 at the dot (though everyone struggled), and an assist. He got pounded in the advanced stats, but Q won't give a shit about that. The question is what does Quenneville do for the rest of the road trip? Does he ride Handzus because they got a W? Zus doesn't have the break as he is suiting up for Slovakia. Is Bickell going to crack the line up or is he going to get an extended stay at the hot dog buffet? I can't answer because I don't know what the "more" is that Q wants, but Bickell sure as shit can't give it to him from the press box.

- Crawford was pure sex. I probably undersold it a bit in the game recap, but he was lights out after the early yip. When the game was close, his A game was there.

- Nineteenth time the Blackhawks have scored 5+ in a game. That is a boatload of goals. I like goals.

- Another brilliant outing from the fourth line. Nine shots between them, and six from Bollig. Kruger was particularly nasty, and his faceoff wins did a lot to get that line humming. I'm still leery of Bollig down the stretch and especially in the playoffs, but for right now it's all gravy baby.

- Ben Scrivens had a 59 shot shutout for the Oilers which is bananas.

Attach The Stone Of Triumph To... 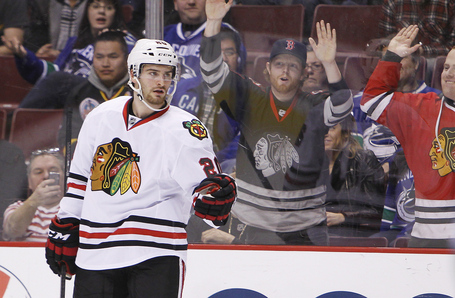 Blackhawks at Sharks on Saturday so here's to swimming with bow legged women.