Blackhawks Drop A Point To The Sharks

Two 3rd period goals are not enough to get the Hawks past the Sharks.

Share All sharing options for: Blackhawks Drop A Point To The Sharks

The Blackhawks lost a game to the Sharks in which they got beat at their own game.  The Sharks were able to win Sunday night's game by tilting the ice in their direction and limiting the Blackhawks to a lot of one and done possessions.

The Blackhawks had a bit of a jump to their step to start the game.  The Hawks were able to get seven of the first eight shots on goal but the Sharks would strike first.  San Jose would pin the 3rd line in their own end for an extended period of time around the midway point of the opening frame.  Jason Demers found himself wide open and the right faceoff dot and slapped a one timer past Corey Crawford's stick, at 10:12, to give the Sharks a 1-0.  The Blackhawks played a nice period but they failed to cover a good cycle by the Sharks and they found themselves down by a goal after one.

The 2nd period came and went withtout a goal from either side but much of that was due to the great play of Corey Crawford.  Crow made his best saves late in the period.  First when he stopped a shot from the point by Brent Burns and the rebound attempt by Joe Pavelski.  Just over a minute later the Hawks defense allowed Patrick Marleau to set up camp in front of the net but Crawford was there to make the stop.

The Hawks were able to turn things around in the 3rd period.  Niklas Hjalmarsson tied the game at 1:27 after Jonathan Toews found him wide open in the slot where he beat Adam Stalock with a wrist shot to his glove side.  Patrick Sharp got the secondary assist on Hjammer's fourth goal of the season.  Michal Rozsival joined the party and tied the game at 4:01.  Marcus Kruger, who just jumped on the ice, got the puck just below the dots and passed back to Rosvial at the blue line.  Rozy's shot got past the traffic in front and Stalock's glove to give the Hawks a 2-1 lead.  The Sharks would tie the game at 11:10 when Brent Burns tapped in a great feed from Joe Thronton.  Burns had plenty of space because he was allowed to cross check Hjalmarsson into the 200 level.  Neither team could score in overtime and the game with into everyone's favorite palor game; the shootout. Jonathan Toews and Patrick Sharp were denied while Logan Couture and Joe Pavelski both scored on their attempts.

* Sunday night's Blackhawks game was brought to you by Cuisinart. Holy smokes was Q's line blender on full blast.  The Hawks pretty much played the final period with nine forwards.  Ben Smith had two shifts in the 3rd, Brandon Bollig had one and Bryan Bickell did not see the ice after the 18:43 mark of the 2nd period.  I am all for stapling Bollig to the bench but not sure why Bicks and Smitty are currently residing in the "Viktor Stalberg Memorial Dog House."  Andrew Shaw also took some shifts on the 2nd line so maybe, just maybe, Q is finally seeing what many of us have been screaming about Michael Handzus for months.

* Speaking of Brandon Bollig, if you can't get Mike Brown to drop the gloves what purpose are you serving? Brown did not deserve a penalty because his hit on Johnny Oduya late in the 1st period.  Oduya clearly saw Brown coming and turned his back to Brown.  Bollig tried to protect his teammate but ended up being the only player going to the penalty box.  Dumb!

* Even thought the final numbers don't show it, the Hawks got it handed to them at the dot during the 2nd and 3rd periods.  Marcus Kurger was 6 of 17 and Andrew Shaw was 4 of 12.. Unacceptable.

* I will never be one to blame officiating for a loss, but Sunday night's game left much to be desired out of the zebras.  These guys were calling the game as if there was a chance for a flight to actually take off from O'Hare after the game.  How Brent Burns got away with the cross check on his game tying goal is beyond me. Oh well, move on to the next night.

* Monday is going to be epically cold in Chicago and much of the Midwest and Northeast.  I beg of you to be smart and safe over the next 48 hours.  Let's all stay indoors and chat about hockey on Monday. Ok? 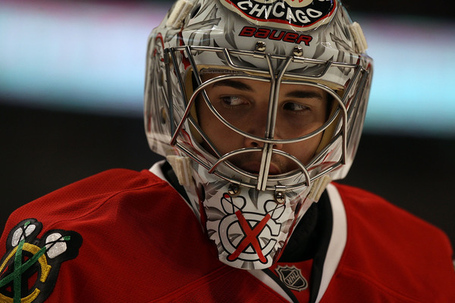 The only reason the Blackhaws got a point tonight was because of Corey Crawford.  There is no goalie controversy in Chicago, despite what anyone says.  Crow is the #1 and Antti Raanta is a great story who will hopefully maintain his quality of play and be a fantastic backup.  Crawford had to make 40 saves on Sunday and it was a shame the team in front of him couldn't do better because he desereved better than one point.