The United States and Russia play a great game that ends with T.J. Oshie becoming the hero.

Share All sharing options for: USA Defeats Russia In A Wild Shootout

Rolling out of bed to watch hockey is a little weird but not sleeping in on a Saturday is totally worth it for a game like the US vs Russia.  The pace was fast and furious right from the opening draw.  The fanatic Russia crowd was loud and passionate and the players on both sides had a extra jump to their step.  Despite the larger ice surface, there was not a lot of room to work with the puck.  The physical play was amped up as well with many big hits and post whistle scrums.  Ryan Callahan and David Backes led the charge in this department.  The period ended in a scoreless tie but the Russians held a 13-10 advantage in shots and the overall possession play.

The United States would start the 2nd period with about a minute and a half on the power play but could not convert.  Pavel Datsyuk would get the first goal of the game at the 9:15 mark.  Datsyuk caught the defensive pair of John Carlson and Brooks Orpik a bit out of of position and flat footed gaining the zone.  He blew right by them and snapped off a pretty shot that got by Jonathan Quick and got just inside the post.  Alexander Radulov would take a bad penalty by taking a run at Dustin Brown behind the play at 15:17.  Cam Fowler would tie the game up just over a minute later.  Phil Kessel took the initial shot and James Van Riemsdyk was in front to get the rebound to Fowler at the back door.  The puck hit off his skate and got in past Sergei Bobrovsky.

Things got a bit crazy in the 3rd period.  Russia had a power play to start the period after Patrick Kane got called for hooking with one second left the in the 2nd period.  The Americans would kill off that penalty and a weak Dustin Brown tripping call a couple of minutes later.  Team USA would convert on another power play thanks to a Alexander Radulov penalty.   Kane made a sweet cross ice pass to find a wide open Joe Pavelski who buried his one time shot at 9:27.  Radulov would get a little redemption by screening Jonathan Quick on Pavel Datsuyk's second goal of the game at 12:44, which came on the power play thanks to a terrible Brown penalty for kneeing.  It had appeared that Russia had taken the lead a few moments later when a Fedor Tyutin shot from the point got in over Quick.  The play was reviewed to see if the puck was hit by a high stick, which it wasn't.  Much to everyone's surprise the goal was waved off because the net had come off its moorings before the puck crossed the line.  This would have been a good goal in the NHL, but not in international play.

Team USA had a power play for the final 1:32 of regulation but couldn't score, even when it carried over to a four on three advantage to start the overtime.  Patrick Kane had two great chances to win the game in overtime.  First came on a breakaway and second came when he had a ton of space in front of the net., but Sergei Bobrovsky was there to make two big saves.  The game went into a shootout where international rules allow you to use a shooter as many times as you'd like after the first three rounds.  After a goal from T.J. Oshie and Ilya Kovalchuck in the first three rounds the Oshie vs Kovalsyuk show began.  It will be easier to just show you the chart than to try and explain what happened, so here it is:

* I was really impressed by the American defensive core.  The were able to keep their composure early in a very hostile environment and were very sure handed with the puck in their own zone.   If they were able to succeed in that situation they are good to go from here on out.  These Olympics are going to be the coming out party for Ryan McDonagh, who was fantastic today.  I have to check the rule book to see if I am allowed two man crushes on the same team, since I already have one on Mats Zucarello of the Rangers.

* Even though I am pretty sure we will see Ryan Miller in net against Slovenia tomorrow, Jonathan Quick is the man from here on out.  He was excellent all game long and made some huge saves on the very talented Russian forwards.

* Speaking of Kane, he needs to be paired with Joe Pavelski for the rest of this tournament.  They are one hell of a sexy duo.

* Dustin Brown is the worst and has no business on this team.  He followed a terrible neutral zone turnover with one of his famous knee to knee hits shortly after his team took a 2-1 lead.  While sitting in the box, Russia was able to tie the game.  Brown is one of the most overrated players who has been awful this season.  He is taking up a roster spot from a more useful player like Kyle Okposo, Bobby Ryan or Brandon Saad. 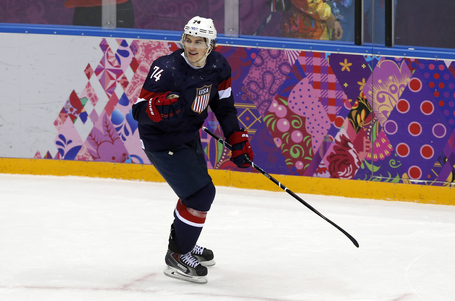 You go 4 for 6 on shootout chances against the reigning Vezina Trophy winner, you deserve this honor.  As far as praising a member of the Blues, at least it wasn't Backes!