The Chicago Blackhawks beat the Anaheim Ducks, giving them eight of 10 points on the road trip.

Winning is fun, imo. In a battle between the two teams with the most points in the NHL, the Chicago Blackhawks knocked off the Anaheim Ducks 2-0 on Wednesday night. Corey Crawford got his first shutout of the year, Marian Hossa did Marian Hossa things, the Ducks lost despite outshooting an opponent for once and Corey Perry did not kill anyone. It was a good time.

The first period started off relatively slowly for the Blackhawks. They could not manage a shot for the first six minutes despite a bit of a back-and-forth start. About midway through the first, Kris Versteeg drew an interference call from Kyle Palmieri. The Hawks could not capitalize on the man-advantage. Just a few minutes later, forward Andrew Shaw took a bit of a lazy tripping penalty at the 12:00 mark. Only 81 seconds later, Brent Seabrook tripped Kyle Palmieri, putting the Ducks on a 5-on-3 power-play. Anaheim moved the puck around very well and put up several shots on Crawford, who turned them all away. Crawford had multiple good saves on some great chances, many set up by Corey Perry, who parked himself just to the left of Crawford's net. With about 2:45 left in the first, the Ducks were outshooting the Blackhawks 15-5. The Hawks had a little bit of a late surge to finish off the period but could not put one home. The period ended with the Ducks outshooting the Blackhawks 15-9.

The Blackhawks opened the second period with a bang. Marian Hossa took the puck below the Hawks' circle, rushed up the right wing, made a sweet backhand pass across the ice to Patrick Sharp at the Hawks' blueline. Sharp gave the puck back to Hossa, who took the puck, waited out Jonas Hiller and slammed it home for his 24th of the year. The Blackhawks spent a good amount of time in the Ducks' zone over the next several minutes, causing the Ducks to have to blow their timeout after three straight icing calls against. Shaw got called for another dumb penalty at 11:07, this time a kneeing call. The Hawks promptly killed it with relative ease. Five minutes later, the Blackhawks' march to the penalty box continued. This time, Michal Rozsival was sent off for four minutes on a high-sticking call. The Blackhawks' penalty kill only needed a little help from Crawford on this one. They did a fantastic job of breaking up passes, winning board battles and finding ways to clear the puck. The second period ended with the Blackhawks up 1-0 and trailing in shots 23-18.

The third was pretty back and forth for most of the first ten minutes with only a few stoppages. Midway through the third, Ducks forward Matt Beleskey took a spring pass to catch the Hawks in a change. Nick Leddy recovered in time to prevent Beleskey from getting a shot off, but Beleskey continued toward the net and knocked Crawford over. Beleskey was called for goaltender interference and was sent to the box. On the ensuing power play, the Blackhawks generated some great chances but could not finish the job. They also generated a great chance for the Ducks when Hossa threw the puck from the boards behind the goalline and right to a Duck forward parked in front of Crawford, who knocked it away. Jonathan Toews put the game away with his 19th goal of the year at the 17:29 mark in the third.

The Blackhawks seem to be putting together a solid February after a mediocre start to 2014. For all that has been made about their struggles these past few weeks, the Blackhawks have earned eight of 10 points on the road trip and have a chance to finish 10 of 12 before the Olympic break. Seven of those eight points have been earned against teams currently in a playoff position. While it is probably accurate to say the Blackhawks have not been playing to the best of their abilities recently, eight points in five games against The Other One is great.

* Michal Handzus looked really good on the PK after a bit of a rough start on the first penalty of the night. He did a great job of knocking pucks loose and clearing the zone, which he did several times. Handzus may be essentially useless in almost every other facet of the game, but if Quenneville must continue to throw Handzus out there night after night, might as well keep him on the penalty-kill. He has looked right at home.

Sticking with the topic of the penalty-kill, it has been exceptional for several games now. Chicago has killed 32 of its last 33 penalties, stretching back to the last time the Blackhawks played the Ducks on Jan. 17. It took long enough, but they seem to have found a group that is working for them. Now the power-play will inevitably drop off into mediocrity.

* Crawford was nails tonight. In his first shutout of the year, he stopped all 29 shots he faced, including 11 on the power play. He loomed large and was a huge reason the Hawks will leave Anaheim with two points. *whispers* He has been one of the best Canadian goaltenders over the past few weeks. Not that he deserved to go over Roberto Luongo or Carey Price, but he very well could have taken Mike Smith's spot. Alas.

* As @bhawksfanjen pointed out, Brandon Bollig had more 5v5 ice time than Marcus Kruger, Brandon Saad, Kris Versteeg, Ben Smith, Bryan Bickell and Shaw. This needs to not be a thing.

* Nick Leddy had maybe his best game as a Blackhawk tonight. He was all over the place. He led rushes, had a couple of great recoveries on what seemed like dangerous chances from Anaheim and looked comfortable all night. It will be fun to see what he can do with any consistency with his pairing. So basically, next year when he is to the left of Niklas Hjalmarsson.

* According to Tracey Myers and several other media members, Joel Quenneville said Patrick Kane will not make the trip to Arizona. Instead, Kane will be in Buffalo, attending his grandfather's funeral. 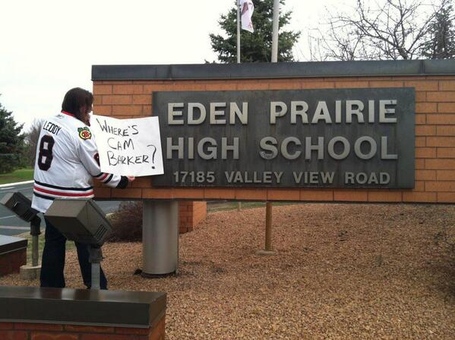 Nick Leddy - Choosing between Crawford and Leddy was tough, but Leddy was extremely impressive tonight. Also, it is extremely difficult to pass up any opportunity to make fun of Cam Barker.