The Scoop On The Penguins

Share All sharing options for: The Scoop On The Penguins

In anticipation of the Stadium Series game and the first NHL game that will treat us to Jonathan Toews and Sidney Crosby facing each other, I put Mike Darnay (@MikeDarnay) from Pensburgh (@Pensburgh) to the test to find out more about what we can expect from the Penguins. Turnabout is fair play so I answered Mike's questions as well which you can find at PensBurgh.

Due to this very special occasion, the amazingly talented Ali Lawrence (@AliLawrence on Twitter) created the art you see above. Ali is the mastermind behind the "My Little Blackhawks" Tumblr that you can find here. It's a lot of fun so if you like creativity and hockey, you will enjoy it.

Now to the questions:

Jen: Most Chicago fans are familiar with the first two lines of the Penguins, could you fill us in on the third and fourth lines?

Mike: Right now, the 3rd and 4th lines could be summed it as very...questionable. They have been a patchwork in progress all season long. The only constants (as far as I can think, off the top of my head) have been Brandon Sutter and Craig Adams on the 3rd and 4th, respectively. I remember seeing somewhere yesterday that had mentioned how Brandon Sutter has had 15 different players on his wings so far through this season. With that much rotation through the lines, it's hard to have high hopes or expectations for consistency, let alone to expect production. With the top-heavy Penguins lineup, loaded with Crosby, Malkin, Neal, Kunitz, and company, the 4th line doesn't NEED to be great or even exceed expectations. They just need to be serviceable.

When I watch the 4th line, my hopes are that every other shift, they can manage to control a cycle through the offensive zone and at least control play a little bit. I don't expect much scoring from them, so when they do manage it, it's a welcome surprise. All that said, I think Deryk Engelland has been the Penguins best 4th line player so far this season. He was moved there from defense when the healthy players made it back on the blue line and there was a log jam and he was been very consistent. He can do what he does best, play physical, and if he feels the need to fight, i would prefer him do it as a forward than as a defenseman. It'll be very interesting to see if and what Ray Shero does to bolster the 3rd and 4th lines. I myself, am hoping that the speculation of a Ryan Kesler for Brandon Sutter + prospects could come to be a reality.

Jen: Defensemen Matt Niskanen and Olli Maatta have been very impressive this season. What strengths do they bring to the team?

Mike: I think what Maatta and Niskanen bring to the table is a quiet calmness and chemistry. I never would have expected Maatta to be playing at this high of a level, but it's tremendous to see. Their chemistry together seems so natural, like a couple of crafty veterans. I think it helps that they play a similar style, both being good skaters and play a calm, puck moving game. With Kris Letang being a question mark whether or not he will return, and Paul Martin being out for at least 4 to 6 weeks, it's hard to say whether or not Maatta-Niskanen will stay together as a pairing, but I for one, am really looking forward to Maatta finishing the year, especially coming off a great tournament in Sochi, seeing how much confidence he should be oozing with.

Jen: Head Coach Dan Bylsma got a lot of attention during the Olympics. Are Penguins fans happy with the way he has handled the team? What does he need to change to get the Penguins back to the Stanley Cup Final?

Mike: Oh boy, we had to go there. The ever-hurnming talking point of Dan Bylsma. It truly depends on who you ask if they are happy with how he has handled the team. One side of the room/fan base will tell you they love what he has done amidst all the injuries, and the other side will act as if he did ungodly things to their family. I myself, am very much, middle of the road. I think there is some valid criticism out there (but what coach doesn't deserve criticism?), but if you are willing to critique, you sure better be ready to give praise when it's deserving. Bylsma, and more notably, the Wilkes-Barre staff led by John Hynes, did not get anywhere near enough credit in December when the Penguins were rattling off wins against good opponents while missing Orpik, Martin, Letang, and Scuderi. Maatta and Niskanen rose into a shutdown pairing, and the other pairings were made up of AHL players and teenagers. It was quite impressive to watch, and was a great point to the systemic nature of the Penguins and their ability to plug young defenseman into a role, and simply ask them to play hard and do their one job and the system would benefit them in a great way.

As far as what he needs to change....that's the million dollar question. The popular answer will be ‘make adjustments,' but I think match ups are a big part of it. With Ray Shero's help, being able to construct a bottom six that is a pain in the ass to play against, but bring a scoring threat  SHOULD be enough to get this Penguins team through one or two rounds in the playoffs. Last year, Tuukka Rask, Zdeno Chara, and Claude Julien's Bruins stuck it to the Penguins hard when the superstars couldn't get the puck in the net. The bottom six became an enigma and the series was over before we all had realized it had just started. I feel that the defense has time to work itself out. The 3rd and 4th lines need help in a big way. Some relief and scoring and maybe even a veteran presence could help the flack come off of Bylsma's back, should the Penguins be eliminated early, or at all, and direct it to more true issues that this team's roster construction is facing. 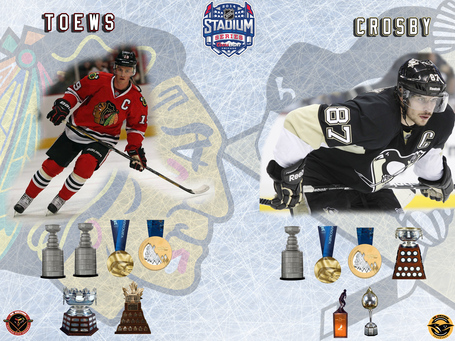 The game would be special with Toews and Crosby facing each other for the first time in the NHL, but having that come about during an outdoor game should make this event even better. Enjoy the game!