Last week, I compared team puck possession, defense, goaltending and special teams for the Chicago Blackhawks, Colorado Avalanche and St. Louis Blues. If you missed it, you can find that here. As promised, I have completed a comparison of the forwards for these teams. If you are not familiar with the stats used below, these articles explaining the basics may help you.  Please feel free to ask questions in the comments below or ask me on Twitter and I will be happy to address them.

The forward lines as I have grouped them do change sometimes so these are really just approximate groupings. The race to win the Central Division is very tight right now and there is no reason to expect that will change much as the teams make a push for the playoffs.

In order to compare the forwards for each of these teams, I used: Goals (G), Assists (A), Points Per 60 (P/60), Time On Ice Per 60 (TOI/60), Corsi For Percentage at 5v5 (CF% 5v5), Corsi For Percentage at 5v5 Score Close(CF% Close), League Rank (Rank), Corsi For Percentage Relative (to teammates) at 5v5 Score Close (CF%Rel Close) and Quality of Competition (TotTm% QoC). The players were sorted from the highest CF% 5v5 Close number to the lowest in each table. It should be noted that some of these lines are not used as traditional 1st, 2nd, 3rd and 4th lines but to make the comparison easier to do, I've labeled them as such.

Before comparing each line, it is important to see the difference in the way the teams are deployed. This helps put some of the information below into context. In order to read these usage charts properly, you should know the following. The size of the player's circle indicates the TOI/60. The color of the circle indicates the player's possession numbers, i.e. CF% 5v5. The darkest red is the lowest value continuing up the spectrum to the darkest blue indicating the highest possession values. The higher the circle is on the chart, the tougher the competition the player regularly faces. The left of the chart indicates more defensive zone starts. The right side shows the player gets more offensive zone starts. All of the usage charts included herein are from www.extraskater.com. You can click on the images to see a larger image. 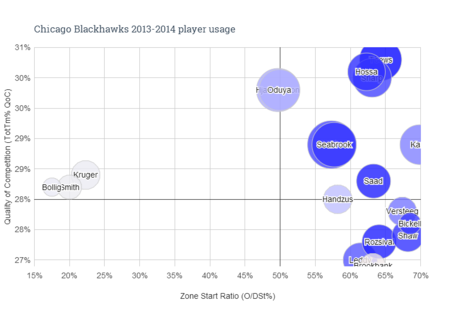 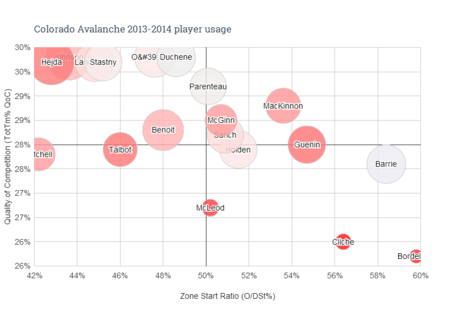 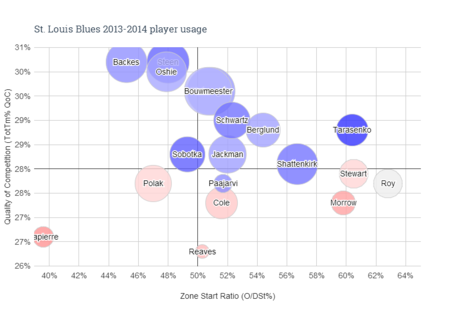 As you can see, the Blackhawks employ player usage very differently than the Avalanche or Blues. The fourth line centered by Marcus Kruger takes the vast majority of the defensive zone starts and against a high quality of competition. The more offensively inclined lines are thus afforded more offensive zone starts. Additionally, because the Blackhawks are a strong puck possession team, they tend to have more offensive and neutral zone starts than teams that possess the puck far less. The Avs tend to deploy players based upon the Quality of Competition they will face and to a lesser extent, zone starts. The Blues take this approach a step further. It is obvious that the 4th line players are used sparingly and only against the lowest competition. The Blues first liners are tasked with the majority of the defensive zone starts.

When a player like Gabriel Landeskog is tied for last in goals among a group of forwards, it is safe to assume the group is pretty good. Alexander Steen and Patrick Sharp are among the leaders in the NHL in goals. These first lines include the captains of each of the teams and some of the newest faces too. Jaden Schwartz and Nathan MacKinnon have impressed many with their play this season and earned a shot at slotting in on the top lines for their teams.

On the whole, these players tend to face the toughest competition. The actual differences in Quality of competition are small, but if you want to explore what matchups the coach is chasing, these distinctions can help. I find using the TotTm% QoC of opposing forwards for home games helps sort this out. For example, when at home, the Blackhawks top line faces the opposing team's top line at a 2:1 ratio with the Kruger line.  So essentially, when Joel Quenneville has the benefit of last change, he uses his 4th line, now a checking line in Chicago, to take some of the pressure off of his top line.

Here is the usage chart from www.extraskater.com for the 1st line forwards. 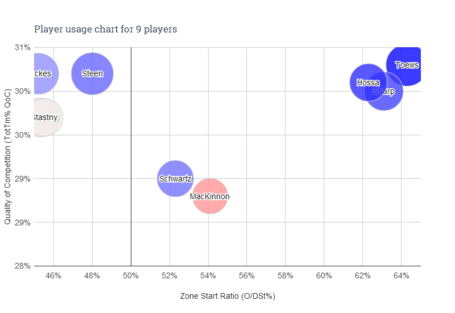 The second lines for the Blackhawks and Blues have been shuffled many times this season. Steve Ott has only just come to the Blues so his possession and production numbers reflect far more of his time with Buffalo than St. Louis. These lines tend to have one or two players that are offensive standouts and then supporting cast. The standouts here are Patrick Kane, Ryan O'Reilly and Matt Duchene. T.J. Oshie brings up the rear in terms of the bigger names, but frankly, the others I mentioned are in a different class altogether. 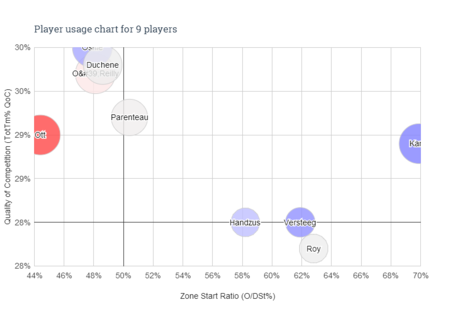 The third lines are a bit trickier to compare. Both Chicago and St. Louis tend to use their third lines as additional offensive lines instead of actual checking lines. Vladimir Tarasenko and Brandon Saad stick out like sore thumbs on these lines but therein lies part or the reason these teams are so successful. Both teams have spread out the offensive firepower and that makes them tough to matchup against. Colorado's third line is a bit more of a traditional checking line. They do contribute some to the offense but they are used against midlevel competition and heavily in the defensive zone. 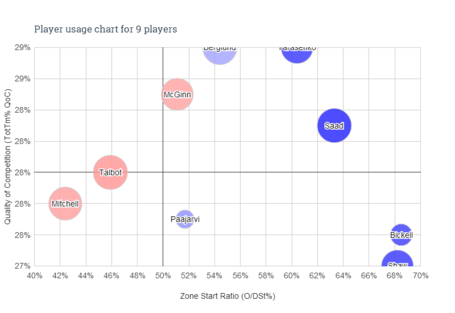 The fourth lines of these teams could not be used more differently. Chicago's 4th line is used as a checking line. They face tough competition and nearly exclusively start out of the defensive zone. They also have contributed nicely to the offense, which is a cherry on top of the team's sundae. The other noticeable and unusual thing about the Blackhawks 4th line is that they are a positive (at or over 50%) possession line. This is something the Blackhawks and L.A. Kings do that no other team to can seem to pull off. The ice time for all of these lines is usually a little smaller than the other lines, although again there are some usage differences. The difference in the quality of competition is also very telling here. The Blues and Avs trot the 4th line out against less skilled lines almost as a rule. 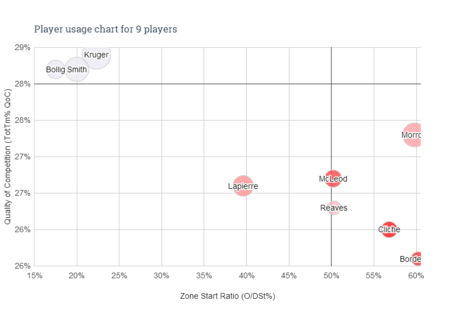 Sobotka is supposed to be returning to the ice soon for St. Louis. I do not know if his leg injury will be fully healed for the playoff run so it is difficult to determine if he will be playing. He is obviously one of the Blues better possession and offensive players so if he is ready to play soon, they will only get more dangerous. From what I have heard, Alex Tanguay is out for the season so the Avs lost one of their better possession players when he was injured. Peter Regin has only recently started playing for the Blackhawks after being acquired by the Blackhawks. His possession numbers therefore do not reflect much of his time or usage in Chicago. He has been slotting in at the 3rd line center position when he has played. 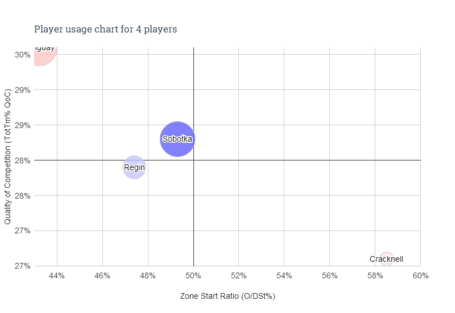 The team leaders also shed a bit of light on the systems used by each of these teams. David Backes, the Blues 1st line center, also leads the team in the physicality department. Since the trade of Chris Stewart to Buffalo, Backes has taken over the lead for his team in penalty minutes. He also leads in the Hit differential rate. Hits Diff/60 is shorthand for hit differential per 60 minutes. A player's hit differential is calculated by the taking the number of hits given by a player and subtracting the number of hits taken. It is not rocket science of course, but it does tend to show how much a team buys into a big hitting philosophy. Backes is one of very few players in the NHL who is near the top in hit differential and still manages to maintain strong possession numbers.

Anyone familiar with the Blues does not need to be shown numbers to know they like to hit...a lot. I saw a Twitter Q&A session with a player from the Dallas Stars last season, you'll have to forgive me if I can't recall which player it was, but when asked who the hardest hitter in the NHL was, he said it was David Backes. On the flip side of the physicality coin is the Blackhawks. Chicago has only 3 players with a positive hit differential (Brandon Bollig, Bryan Bickell and Brent Seabrook) as compared to the Blues who have 12. This difference is due to playing a very different style of game. The Blackhawks rely on speed in transition and offense that heavily includes the defensemen. The Avs also play a very physical game with 13 players with positive hit differentials but they also rely on their speedy forwards to fuel their offense.

As you can see, the Blues have been making their big hitting style of play work by continuing to possess the puck more often than their opponents. The Avs have tried to make this style work but their poor possession numbers indicate it is not leading to success. What has led them to success is a group of very opportunistic, speedy forwards and an incredible season in goal from Semyon Varlamov. The Blackhawks have continued their success with the speedy skilled game that has worked out pretty well for them in the past.

One way of encapsulating and simplifying the offensive and puck possession rates for these teams is to look at SF% (Shots For Percentage) over time and see how it relates to team success. Here is a graph of the SF% for each team since the 2007-08 season to the present. 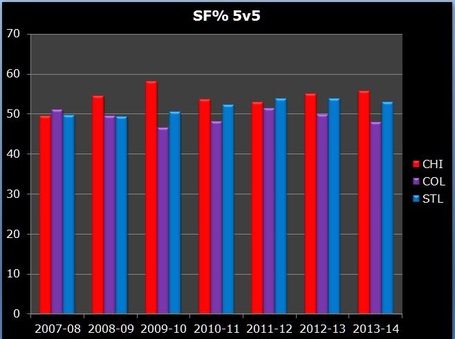 This chart is more for the overall aesthetic and to get a sense of where the teams have been prior to this season. They are three very different teams to be certain. The lack of possession over a 7 game series makes me question whether the Avs can pull out a playoff series win. Their goaltending could certainly help them do that. The Blackhawks and Blues are built for long playoff runs. Neither team has a big hole in their armor. In an already stacked Western Conference, it will be interesting to see which of these teams can go the farthest in the playoffs.