This feature reviews which Chicago Blackhawks players have soared above the competition and which ones could use a jump-start. Call it hot or not, call it a heat check, let’s look at how the men of the four feathers are doing.

The Blackhawks penalty kill efforts have swung a full 180 from the start of the year. Since the Olympic hiatus the Hawks have stymied 21 of 23 opposing chances. I haven't noticed any major system difference and the cast of characters hasn't changed. It seems like it's more the stat correction we expected. It's been pretty stout since the start of the year, as Jen chronicles here. 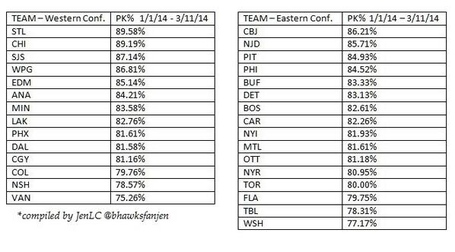 Obviously it's a team effort, but let's take a minute to appreciate how good Marcus Kruger has been since dressing for team Sweden. The fourth line center is rocking a 67.5% Corsi For in his last six games while facing some of the toughest competition. Driving possession, killing penalties, having top notch hair, the Kruger life.

Corey Crawford is rolling right along since the end of February. Five games, eight goals against with a .93 save %. He is right in the sweet spot of what you should expect from him. Hasn't stolen a game, but hasn't cost them anything. He caught some flack in his start against the Avalanche, but was hung out to dry by a bad change. You toss in the goal Seabrook potted in the Penguins outdoor extravaganza and his numbers look even better. I've never lost confidence in Crow this season. He's a pillar of consistency right now.

There's a couple players I could pick on, but even at 3-3-0 since the break no one has been awful. Shaw started out slow, picked it up when he got put with Toews, and then took a boneheaded penalty against the Avalanche. Oduya and Versteeg haven't exactly gotten my blood pumping lately. Instead I'll list some things that leave a bad taste in my mouth.

Power play woes. Despite being top 5 in the league, the Blackhawks power play has not been pulling its weight as of late. It looked good last night, despite not scoring. More often than not it's been pick your poison. Bad zone entries, not getting shots through from the point, not pouncing on the loose change have all been problematic at times. A lot of the stagnant play stems from the Hawks looking for that one option and then not being able to motion the puck if it fails. Toews will get the puck on the goal line and there won't be any movement on the backside leaving him to dish to Kane to fire a short side shot right into the tender's breadbasket.

As we gear towards playoff hockey, you have to remember that a power play that's not clicking isn't a death knell. The last three Stanley Cup winners finished the postseason with power play conversion rates of 11.4 (Blackhawks), 12.8 (Kings), and 11.4 (Bruins). The bones are still there for an effective unit. No reason to think they can't pull it together a bit. 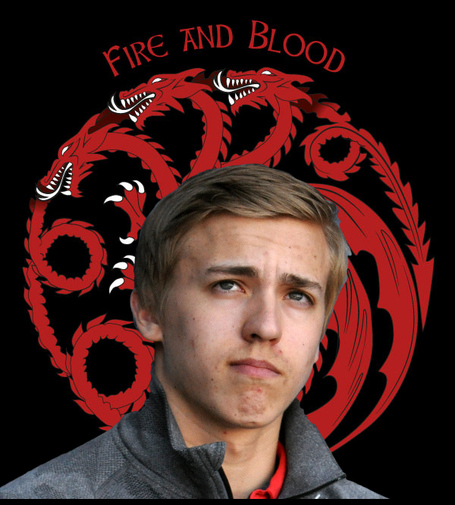 Teuvo Teravainen Targaryen. Yeah, I know he "hasn't played in a regular season game in his entire life," but excuse me for being a dreamer. Earlier this week on 670 The Score, Quenneville sent a buzz through Blackhawks fandom when he said that we are going to get a look at the Finnish phenom. The embarrassment of riches means we talk a lot about the second line center, and since Teuvo's showing at the World Junior Championships we've assumed the throne will be his.

How is it going to play out? Tough to say. His playoff series starts soon, and his squad, Jokerit, is not expected to go far. He can play 9 games in the regular season before he burns a year of eligibility. Stan would never do that, and he would have to deal with the cap squeeze. Is he going to get thrown right into the playoff grinder as a black ace? I think so. The Regin experiment isn't going well, and when your dressing Brookbank at forward in a division game you are crying out for forward help. Teuvo could be a difference maker, but his slight frame and lack of experience are concerning.