Once again the Hawks can not put together a full sixty minutes and lose 3-2 to Nashville.

Share All sharing options for: Blackhawks Lackluster Performance Leads To Another Loss

Should we be concerned as Blackhawks fans? Yes. Should we panic and jump off the ledge? No. The Hawks look like a team who is sleep walking their way to the playoffs which is not a good thing. But, this is a team lead by guys like Jonathan Toews, Patrick Kane and Duncan Keith. Oh, and that Marian Hossa guy could be back on Sunday.  There is plenty of time to get out of this funk, I don't see any reason why they won't.  At least this isn't occurring during the Western Conference Semifinals.

The first period reminded me a lot of Wednesday night's game in Denver where the Hawks played well the first half of the period but faded in the second half.  The active sticks of the Hawks' defense made it nearly impossible for the Predators to get shots off during the first few minutes. It took over nine minutes for the Predators to get their first shot on goal but once they did, they kept the pressure on the Hawks in the offensive zone.  Mike Fisher got Nashville on the board at 15:33.  The puck found Fisher's stick after a rebound from a Roman Josi shot and he put it up off the right post and past Corey Crawford. A little over two minutes later, Marcus Kruger went to the box for flipping the puck over the glass....again.  Crawford gave up another big rebound, this time off a Shea Weber bomb, and Patric Hornqvist was allowed to get the puck untouched for his 13th goal of the season.  With all the energy sucked out of the building, Jonathan Toews got the Hawks back into the game with just 13 seconds left in the period.  Toews led the rush into the Predators' zone, stopped on a dime and got the puck over to Kris Versteeg who got the puck back to the captain for an easy tap in goal.

After a scoreless 2nd period, Ryan Ellis doubled the Nashville lead just 45 seconds into the 3rd period.  During the final seconds of a power play Patrick Sharp had a weak shot blocked from the blue line and an unaware Duncan Keith did not cheat back despite Corey Crawford banging his stick on the ice to alert him of the expiring penalty.  Roman Josi hit Ellis right of the box for the easy one on one goal.  Peter Regin would score his second goal as a Blackhawk at 8:32, in just his fifth shift since the 1st period.  Andrew Shaw regain control of the puck after a Sheldon Brookbank shot was deflected high over the net.  He got the puck up to Johnny Oduya who got of a high shot towards the net.  Regin was camped out in front of the net and got his stick up to deflect the puck into the Preds' net. The Hawks would get a few chances to tie the game, but once again came up short.

* Rebounds did Corey Crawford in on Friday night, but he didn't get much help from his defensemen.  Neither Brent Seabrook nor Johnny Oduya did anything to impede Patric Hornqvist from getting to the rebound on his power play goal.  Seabrook had to move out from in front of the net to block Shea Weber's shot but missed it.  For some reason, Oduya was standing in the crease instead of in front of the blue paint to get in the way of Hornqvist.  Duncan Keith was in la la land during the sequence that led to Ryan Ellis' goal.  He has to be more aware of the situation and start cheating away from the Nashville net, not towards it. Crawford did make some big saves to keep his team in the game, the most memorable one came when he robbed Craig Smith with his "weak glove hand" in the 2nd period.

* The CSN crew sang the praises of Kris Versteeg all night long but he was still too cute for my liking.  When you are on a line with Jonathan Toews and Brandon Saad just keep it simple.  When you are playing with Bryan Bickell and Peter Regin you can try and be cute.  This is something that has been problem for Versteeg his entire career and is not going to change.  Thankfully, sometimes his urge to be fancy pays off like it did on the Blackhawks' first goal of the game.  And that is why I love the little idiot!

* Dear Marcus Kruger,
Please stop trying to clear the puck high off the glass, you suck at it.
Love,
Greg
* Peter Regin, Marcus Kruger, Brandon Bollig and Michal Handzus all got limited ice time Friday.  Regin responded with getting to the front of the net and scoring a goal.  Thankfully Marian Hossa is coming back either Sunday or Tuesday.  Do we even check to see if Pierre-Marc Bouchard has anything left in the tank until the Finnish Savior comes to town?
* It was great to see Ben Smith get extended playing time and some shifts with Patrick Sharp and Patrick Kane. He has earned it.  It has been a joy to watch his progression throughout the season.  He has gone from a guy who had to fight to even get into the lineup to one of the most consistent players on the team.  Before the season started I wrote that Smith would be the best candidate to replace Michal Frolik on the penalty kill and he has become a beast while shorthanded.  The Hawks are going to need guys like Smith, Bickell and Versteeg to produce come playoff time if they are to have any chance of repeating.
* Ok Pat and Eddie, you hate Viktor Stalberg. We get it! Please move on.... 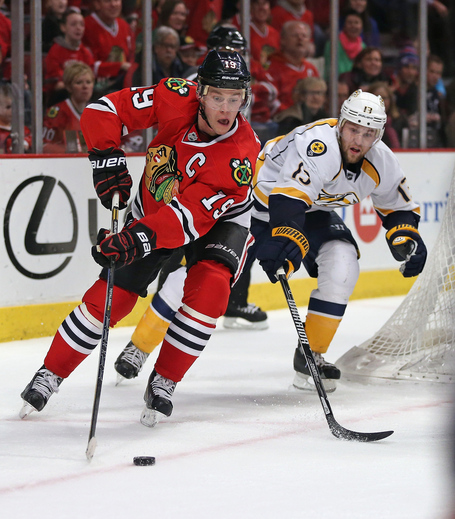 Is there any Olympian playing better hockey than Jonathan Toews this month?  He was a beast all night long.  He scored the Hawks first goal and in the 3rd period he hit the post and nearly pulled off a fantastic redirect of a Patrick Sharp shot.  Not only was he a mad man getting to the dirty areas all night long, but he also won 19 of his 23 faceoffs. Hearing how pissed off the captain was after the game restores my faith in this team.