Smith And Hossa Lead The Hawks Past The Wings

The Blackhawks rebounded nicely with a 4-1 win over the Red Wings.

Share All sharing options for: Smith And Hossa Lead The Hawks Past The Wings

Joel Quenneville called Friday's loss to the Nashville Predators the worst game of the season and did not mince words during his postgame press conference.  The Blackhawks responded on Sunday by firing more shots on goal, simplifying their game and getting to the dirty areas of the ice. The win keeps the Hawks just one point behind the Colorado Avalanche for second place in the Central Division and seven points behind the Western Conference leading St. Louis Blues.

The Blackhawks seemed to have their focus early and the return of Marian Hossa showed up with extended shifts in the Detroit zone.  Marcus Kruger had an early breakaway chance but missed the net by a mile.  Both teams would get a power play in the 1st; Detroit had some chances on their chance and the Blackhawks' power play, well, it happened.  It was obvious early that the Hawks wanted to shoot the puck as they attempted 21 shots in the 1st period, getting 11 to the net.

The Blackhawks would convert on their third power play of the night, at 8:44 of the 2nd period, after getting zero shots on their first two attempts.  Ben Smith dug the puck out of the corner and Marian Hossa got it back to Nick Leddy at the point.  Leddy waited for Smith get back in front of the net before blasting a shot from the top of the left circle past Jimmy Howard for his seventh goal of the year.  The Red Wings would tie the game up with a power play goal of their own at 15:10.  Moments after Jonathan Toews took a stick to the head from Johan Franzen, Gustav Nyquist banked a wrist shot off of both of Brent Seabrook's skates and into the Hawks' net.  Ben Smith would give the Hawks the lead back with just 13.7 seconds left in the period.  After all three Detroit forwards followed Patrick Kane out to the blue line, Duncan Keith fired a shot through traffic and on net with Smith there to put back the rebound.  Patrick Kane got the secondary assist on Smith's ninth goal of the year.

Marian Hossa would continue his triumphant return to the lineup with his 25th goal of the year at 6:33.  Patrick Sharp made a nice little touch pass for Hossa at the blue line who hit 2nd gear blew right by Kyle Quincey and Brendan Smith and snapped a shot past Jimmy Howard.  The Red Wings would apply pressure to the Hawks most of the final half of the period but they couldn't pull any closer.  Jonathan Toews would ice the win with a shorthanded goal at 17:50.  Hossa stripped Johan Franzen of the puck at the Detroit blue line, raced down the ice, stopped and found Toews in front of the net who pushed a backhand shot past Jimmy Howard.

* The win was nice but it could be a costly oneas Brandon Saad left the game halfway through the 2nd period and did not return.   After the game Q said he has an upper body injury.  "He seemed all right here. I don't think it's too serious, but we'll have a better idea [Monday]." So we will all sit on pins and needles until we hear about the severity of Saad's injury.

* Welcome back Marian Hossa. What a night as he finished with a goal and two assists to go along with two takeaways, a blocked shot and a 55.0 CF%.  His legs looked freshed and he showed no rust for having missed the last two weeks.  Any time an elite player returns to a lineup the team usually responds with a jump to their step which is exactly what happened Sunday night.

* Corey Crawford wasn't tested much, especially early, but looked good in making 19 saves for his 26th win of the season.  You can't pin the lone goal on Crawford as the puck took an unlucky bounce off of Brent Seabrook's skates.  His save percentage and goals against average has been climbing and both are currently better than his career average.

* The Blackhawks' power play is back to being clown shoes so plan that parade in June!

* Duncan Keith had an interesting night.  He picked up two assists which gives him 50 on the season and 300 for his career.  He also got away with a high elbow on Teemu Pulkkinen in the 1st period.  Maybe he was avenging his former teammate Mike Kostka who Pulkkinen boarded in the preseason.  He was lucky to not get called for a penalty there but he did get called for hitting Gustav Nyquist in the mouth with his stick late in the game.  Thankfully Marian Hossa happened and the Hawks scored a shorty before the Wings could do any damage.

* If you watched the Hawks' first penalty kill you saw why Michal Handzus is still a valuable part of this team and will be come playoff time.  I don't like him centering 2nd line, but he is one of the better penalty killers and still plays savvy defense, both are needed in the postseason. 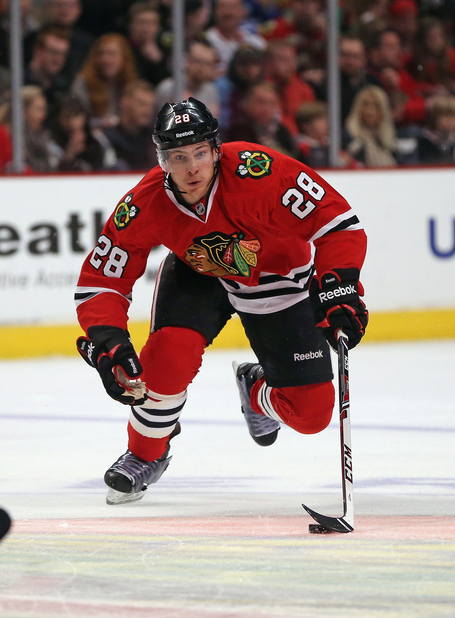 As I wrote on Friday, watching Ben Smith evolve throughout the season has been a joy.  He set the tone by getting to the front of the net early and often.  He set up the screen that allowed Nick Leddy's shot to go in and was in the crease for the rebound on his game winning goal.  He got his shot a centering the 2nd line between Bryan Bickell and Patrick Kane and looked pretty good doing it.  Even though Smith is not a true center by trade he still won 7 of his 10 faceoffs to go along with his two points.  Smith is going to be a key player for the Hawks come playoff.