The Method To Quenneville's Madness

Share All sharing options for: The Method To Quenneville's Madness

Recent personnel decisions by Blackhawks Head Coach Joel Quenneville have left many fans and media scratching their heads. The main issues most recently came in the Blackhawks game on March 12, 2014 versus the Colorado Avalanche.  Quenneville opted to play Sheldon Brookbank, a defenseman, at wing and start Antti Raanta, a young backup goaltender who has not gotten a start in quite some time. The Blackhawks lost the game to the Avanlanche, 3-2.

Raanta's last start was against the Calgary Flames and after allowing four goals in the first period, he was pulled and Corey Crawford started the second period in net. Raanta played well for the team while Crawford was out with a suspected groin injury; however, as his starts have become less frequent, his play has dropped off. Starting him against a team notorious for capitalizing on any small defensive lapse by using speedy, skilled forwards was an interesting one to say the least.

The decision to play Brookbank could likely have been another of Quenneville's "messages" to a player he wants to see more from, namely, Peter Regin. Regin has been playing on what has affectionately been referred to as the "doghouse" line. This line has been the landing spot for the players that Quenneville has been unhappy with such as Michal Handzus, Bryan Bickell, Regin, Kris Versteeg and Andrew Shaw. There was some speculation that defenseman Niklas Hjalmarsson was not 100% healthy for the Avs game after hurting his leg blocking shots in the game versus the Buffalo Sabres. Quenneville's comments after the game which explained that dressing Brookbank was to ensure the team had an extra defenseman just "in case" lend some credibility to that theory.

The decisions in the latest game against the Avs went farther than just two players though. As has been well publicized, Quenneville coached Avalanche Head Coach Patrick Roy when he was still playing. Comments prior to the game the other day led many to think that Roy suspected Quenneville of using a misinformation tactic when he announced Raanta as the starter. Both coaches have indicated throughout the season that they were using psychological tactics on one another given their comments before and after games.

When you look at this gamesmanship through the lens of a likely first round playoff matchup, Quenneville's decisions become a bit clearer. By starting Raanta in the final meeting between the teams, Quenneville denies Roy a last chance to try out offensive schemes or line combinations that could lead to success against Blackhawks starting goalie, Corey Crawford. Marian Hossa was out for the last two games versus the Avalanche due to his upper body injury, so the Blackhawks forward lines were already very different than they will look in the playoffs.  Further, Quenneville used the defensive pairings in a different way than he usually does.

When the Blackhawks have played the Avs this season, Chicago has dominated possession. The Avs have still managed to win the majority of games; however, it is obvious that without the goaltending of Semyon Varlamov, the Avs would not be in playoff contention. A hot goalie can steal a playoff series. Varlamov does have some weaknesses, particularly being down early with traffic in front of the net, so we can be sure the team will work to find the best way to exploit those chances. 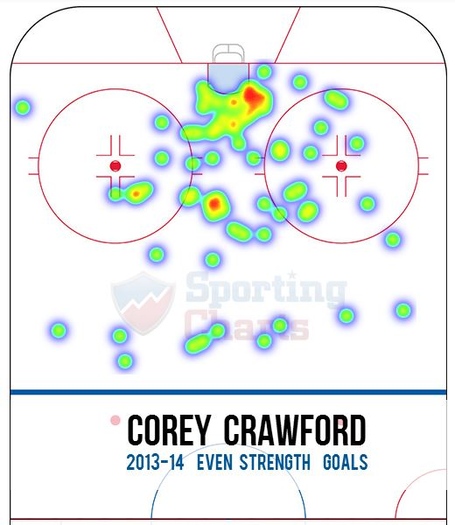 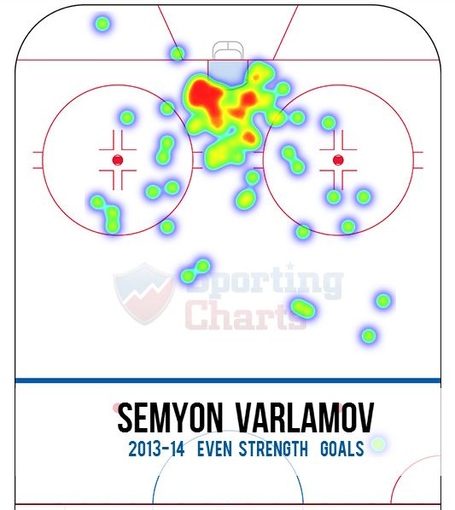 *charts from Ice Tracker on www.sportingcharts.com

Usually, when the Blackhawks are at their puck possessing offensive best, Duncan Keith and Brent Seabrook are on the ice with the line centered by Jonathan Toews. This combination leads to increased offensive zone time. When this is done, Quenneville usually matches the Hjalmarsson - Johnny Oduya pairing up against the opponent's top line as much as possible along with the checking line centered by Marcus Kruger. This takes some of the heat off of the top line and is designed to allow them more room to create offense.

*If you are unfamiliar with the stats used herein, these introductions to the basics may help.

The things to focus on here are special teams and the usage and deployment employed by Quenneville. The first two games of the season were blow outs. In the first game, Keith/Seabrook took far fewer offensive zone starts than is their usual. In a game where the opponent dominated possession, we would expect to see heavy defensive zone starts for all of the defensive pairings; however, other than the March 12th game, wherein the possession was fairly close, the Blackhawks have handily out-possessed the Avalanche in all of their meetings.

In the single win against the Avs this season, the Blackhawks had a 22.2% sh% at 5v5 Score Close. In all of the other meetings, the team controlled possession of the puck and put pressure on the Avs defense. Only the March 4th game saw them score at 5v5 when the score was close.  An empty net goal from the Avs at the end of the game made the score 4-2. The key in the Avs wins versus the Blackhawks has been goaltending and in the three most recent games, special teams play. The January 14th game saw the Blackhawks PK Sv% perform at 50%. In the March 4th game, the PK Sv% was 75.0%. In the most recent game, the only PP goal scored by the Avs came at 5v3. This is encouraging because the Blackhawks PK has been much more effective since January 1st than it was in the first half of the season.

Granted that sometimes goals are just lucky, goalies are just dialed in and effective forwards have off nights, the usage in the most recent game is the most interesting change. It should be noted that the Avs Power Play is very good and has been near the top in the Western Conference particularly recently.  From January 1st through March 11th, the Avs PP% is 22.09%. This puts them in second in the West during that time frame. Only the Phoenix Coyotes have a better PP% (22.68%).

In the March 12th game, the Blackhawks were without winger Marian Hossa. Quenneville changed the forward lines to include Kris Versteeg, Jonathan Toews and Brandon Saad on the first line. The line blender was set on high so it is difficult to get a good grasp of what Quenneville was looking for during the game, which was probably a large part of the point. Even the set in stone Kruger line had some different looks to it throughout the game. At times during the third period, Bickell subbed in on that line in Bollig's spot.

Hjalmarsson and Oduya were used in an offensive zone to defensive zone ratio (O/Dst%) of 70%. This is much higher than this pairing's normal usage. They are often matched with the checking line centered by Marcus Kruger, which starts nearly exclusively in the defensive zone. Kruger and Ben Smith had 0.0 O/Dst% and Brandon Bollig had 27.3% mostly due to less ice time and starts in the offensive zone in the third period. Throughout the season, Kruger's line has matched up against the opponent's top line for one shift to every two shifts the Toews' line has done so. For much of the game, the Kruger line was on the ice with the Keith - Seabrook pairing. This is not the most common combination. This group was on the ice against the Avs first line and third line. The Kruger line also went out with the Hjalmarsson - Oduya pairing when facing the first line and the Leddy - Rozsival pairing against the Avs third line as well.

Often, to the chagrin of the fans, the Kruger line has been used in the final minute of a tied game, so it is obvious that Quenneville has no problems using them in this way. That did not happen in this game. Quenneville used four forwards and 1 defenseman twice during the last five minutes of the game. One of those lines featured Patrick Sharp, Michal Handzus, Bryan Bickell, Brandon Bollig and Nick Leddy. It was not some strange new power play group, but a 5v5 line combination. Quenneville upped these forward heavy line combinations by one forward after pulling the goalie in the final minute or so. The only defensemen to see the ice in the final five and a half to six minutes of the game were Keith, Seabrook and Leddy. In the March 4th game, Quenneville continued to roll four lines throughout the last few minutes of the game even down a goal.

The majority of the March 12th game, the Blackhawks first line was on the ice with the Hjalmarsson - Oduya pairing. This is a change from their normal usage. Quenneville more frequently uses the Keith - Seabrook pairing with the top offensive line. In fact, aside from a PP or a line change wherein their skates briefly touched the ice at the same time, the Toews' line was only on the ice with the Keith-Seabrook pairing for five shifts prior to the last six minutes of the game. Once the group was put on the ice together again late in the third period, they produced a goal from Brandon Saad with assists from Andrew Shaw and Duncan Keith.

When compared with the March 4th game versus the Avs, we can see a big difference in the usage and deployment. That game had a feel of dominance from the Blackhawks with the Avs goals, aside from the PPG, coming after small defensive lapses that led to breakaways. The first line for the Blackhawks was missing Hossa of course, but did have Toews, Sharp and Saad. During that game, Toews' line had 17 shifts with the Keith-Seabrook pairing. Throughout the season, Quenneville has used the Keith-Seabrook pairing less as a shutdown pairing and more as offensive pairing. Those defensemen had 100% O/Dst% and went against the Avs second line more frequently than the first line. They ended up with 53.3% and 59.3% CF% respectively. In the March 12th game, Keith and Seabrook had 50.0% O/Dst% facing the Avs 1st line more often and finished with 41.5% and 41.0% CF% respectively.

It would seem that Quenneville went away from what has worked well for the Blackhawks throughout the season and even worked in the March 4th loss to the Avs. Given all of the different lines used, the change in how the defensive pairings were used and the overall approach to the game, it seems safe to assume that the March 12th game was more about the playoffs and less about winning that game. Of course, teams and coaches want to win every game, but it seems reasonable that a regular season game between two likely first round playoff opponents would be an acceptable sacrifice to get a better idea of what will work and what will not. It also seems entirely reasonable, given all of the differences between this game and others, that Quenneville changed things to deny Roy a chance to fine tune his team's plan of attack against the Blackhawks in anticipation of the playoffs as well.

We are often quick to judge personnel decisions because as spectators we want to the team to win every game now, but there are times that planning for a more important game or series of games in the future needs to take priority. This will not stop any of us from having a knee-jerk reaction about line combinations, scratched players or the starting goalie, but perhaps it will give us some perspective. This is no reason to stop questioning a coach's decisions or discussing what would work better either. Discussion about these decisions is healthy within a fan base and the media for the purpose of learning more about the game and being exposed to differing opinions. So keep discussing and hopefully this information will help assist in that effort.

Data used herein was gathered from: