Blackhawks Lucky To Escape Philly With A Point

The Flyers beat the Blackhawks in the final seconds of overtime, but the game should have been over a long time before that.

Share All sharing options for: Blackhawks Lucky To Escape Philly With A Point

FART NOISES.  This isn't the same Flyers team we saw at the United Center back in December. They looked like a team playing for the their post season lives while the Hawks continue to coast to the post season. Let's face the facts, the Blackhawks should thank their lucky stars they got a point Tuesday night.

If you were late getting in front of your television or into your favorite bar stool, you missed quite a bit of early action.  The third line got the Blackhawks on the board in their first shift of the night.  Patrick Sharp drove hard to the net but couldn't get a shot off.  Michal Handzus jumped on the loose puck but his shot was blocked and Andrew Shaw was in front to put the puck into the Flyers' net for his 17th goal of the season.  Less than a minute and a half later Duncan Keith doubled the Hawks lead.  Jonathan Toews made a nice pass, from below the goal line, to find Keith all alone who fired a slap shot from between the circles that beat Ray Emery five hole.  The Flyers would get a fluke goal a 5:48 to get back into the game and change the momentum.  Scott Hartnell was just looking to center the puck from behind the Chicago net but it hit off of Marcus Kruger's skate first then off Antti Raanta's skate before going into the net.  The Hawks would spend 3:50 straight shorthanded after penalties by Brandon Bollig and Kruger but survived with the lead.  Shortly after the big kill Matt Read won a board battle with Sheldon Brookbank behind the net, then Claude Giroux separated the puck from Andrew Shaw and found Hartnell for a one timer that tied the game.

All four goals scored in regulation came in the opening 16:27 of the game.  The final 40 minutes went scoreless.  The Blackhawks played a good 2nd period and the Flyers were the better team during the 3rd period but the game needed extra time to be decided.  The Hawks were 4.7 seconds away from a shootout but Claude Giroux had different ideas.  Kris Versteeg tried an ill advised cross ice pass instead of getting the puck on net and the play went the other way.  Giroux floated a wrist shot from the top of the right circle over Raanta's shoulder for the win.  Time to regroup and get back at it against the Blues at the United Center.  If the Hawks want any chance of winning the Central, which is pretty bleak right now, they must beat St. Louis in regulation Wednesday night.

* Antti Raanta looked shaky at times and great at a moments as well.  You can't pin the two regulation goals on him but he needs to make that save in overtime.  Raanta did make some big saves but the Flyers were four goal posts and a Steve Downie choke in the open net away from a blow out win.

* Enough of Sheldon Brookbank please.  He got dumped on his ass by Scott Hartnell which caused him to be out of position on the first goal.  Then he lost a board battle to Matt Read that led directly to Hartnell's second goal.  He finished the night with a 15.8 CF%. Woof! We all know Michal Rozsival is going to be the 6th defensemen for the playoffs, so why don't we see what Stan Bowman gave up a 2nd round draft pick for? With the Blues in town Wednesday, we should pretty much expect to see Brookbank at forward.

* My expectation of Brookbank at forward also has to do with that fact that Q hates Peter Regin.  He played a grand total of 5:13 in ten shifts.  Regin isn't great, but he isn't horrible either.  He does have two goals since he was acquired, which is one more than Patrick Sharp has in the same time span.  And yet Jeremy Morin can't find a way to play in Chicago.  Everyone is excited for the potential arrival of Teuvo Teravainen but that will quickly die down when Q only plays him for four minutes a night.

* Marcus Kruger has been struggling of late.  When he isn't flipping the puck over the glass for penalties he is kicking them into his own net.  At least he is still winning faceoffs.  Snap out of it, Frogger! 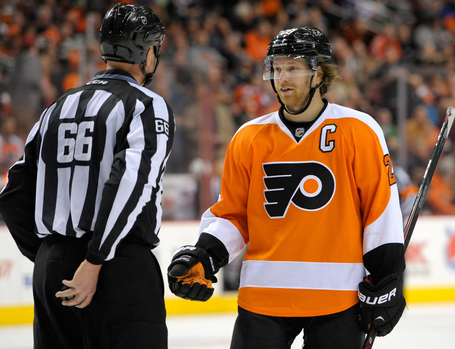 I really liked the Claude Giroux from October, where he only had six assists, better than the guy we saw tonight.  Since November 5th Giroux as 24 goals and 41 assists.  Screw Sidney Crosby, there is your Hart winner.