The Blackhawks roll past the Pittsburgh Penguins with a 5-1 win at Soldier Field.

Share All sharing options for: Blackhawks Shine On The Big Stage Again

The NHL did another fantastic job with presenting their outdoor games.  The Blackhawks looked great, with winter in full effect, in their win over the top team from the Eastern Conference.  The snow fell through the whole game and in the end our captain, the best captain, helped the Hawks to an impressive win.

The constant snowfall definitely snowed down the pace of the game during the 1st period.  So much so that Michal Handzus was the third fastest player on the ice! The Blackhawks got two early power play chances, both thanks to penalties drawn by Brandon Bollig, but could not capitalize.   Patrick Sharp would score the first goal of the night at 15:35 of the opening period.  Nick Leddy kept the puck in the zone after a Brandon Saad shot and got it to Jonathan Toews behind the net.  Toews found Sharp just below the right faceoff dot, who ripped a one time shot off the post and in past Marc-Andre Fleury for his team high 29th goal of the season. The Blackhawks outshot the Penguins 14 to 5 during the first 20 minutes of the game.

The second period got off to a bit of a funky start with a sequence of strange penalties.  Duncan Keith got called for delay of game, which was the right call on a bad rule.  Shortly after that Chris Kunitz shoved Michal Rozsival who fell down like there was a sniper in the 400 level.  Sidney Crosby whined to the refs after the call and then just a few seconds later dove so bad that even Ryan Kesler yelled at his TV.  Despite that silliness, the game remained 1-0 until the best captain in the league doubled the Hawks lead at 10:47.  Jonathan Toews picked up the puck at his own blue line, skated through the neutral zone, faked Brook Oprik right out of his jocked and put the puck between Fleury's legs for an unassisted goal, his 20th of the season.  The Penguins seemed to put some pressure on the the Hawks after the Toews goal but the Blackhawks would score the next goal at 16:43.  Patrick Kane led a 3 on 1 into the offensive zone made such a good pass where all Kris Versteeg had to do was have his stick on the ice in order to score.  Michal Handzus picked up the secondary assist on Versteeg's 100th goal of his career.

The Penguins would get on the board at 6:21 when Brent Seabrook made a nice play off a rebound from a James Neal shot.  The only problem was that Seabrook used one of his best shots of the season to score in his own net.  Bryan Bickell would recapture the three goal lead at 13:57 with his ninth goal of the year.  Brandon Saad made a great backhand pass to find Bickell skating hard to the net.  Bickell's first shot was stopped but he was able to put the rebound in.  The Penguins returned the own goal favor at 17:52 when Simon Depres put the rebound off of a Jonathan Toews shot back into his own net.

* The most important storyline that could come out of the game is the health of Marian Hossa.  He took this hit from Craig Adams late in the 1st period and did not return.

The hit did not look vicious nor did he get hit in the head. Q said he could miss some time after the game, but it wouldn't be "long term."  We need Hoss healthy for the playoffs, so a couple of games off in March is ok with me.  Enter Brandon Pirri...

* I could bitch about the power play not scoring on nine shots in three chances or rave about how great the penalty kill was in killing off all six penalties against the top power play in the league, but with those conditions you have to take the results with a grain of salt.  Marcus Kurger was fantastic on the kill.  I really think his Olympic experience is only going to add to his confidence.  Kruger's best sequence came on the opening face of the 3rd period.  The Penguins started the period with 1:42 of power play time.  Kruger won the opening draw and then out skated Sidney Crosby to the puck and killed off over 20 seconds of the penalty before Pittsburgh could gain control of the puck.

* Patrick Kane was really good Saturday night.  Per usual, he looked a step faster than everyone on the ice even with the coat of snow out there.  He beat Marc-Andre Fleury twice on the power play but was stopped by the goal posts.  He showed amazing patience with his assist on Versteeg's goal.

* Kris Versteeg is starting to run out of venues to score goals at in Chicago.

* I am thinking Marc-Andre Fleury should have rethought his Pittsburgh Steelers themed masked considering the Bears are 21-7-1 all time against the Steelers.

* Brandon Saad jumped up to the top line after Hossa's injury and finished the night as a +4 with a 56.7 CF% because he is all that is man.  Look for Saad to stay on the top line while Hossa is out.

* Bryan Bickell and Peter Regin both have more goals than the entire St. Louis Blues team have since the end of the Olympics.  It will be nice to see guys like Bickell and Versteeg get hot down the stretch. 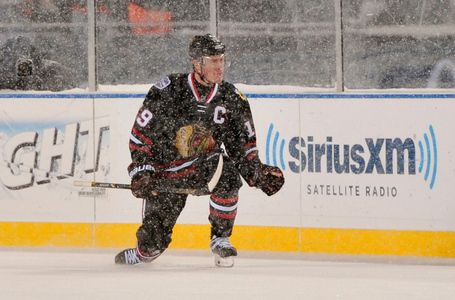 Was there any doubt that Jonathan Toews was on a mission to outshine Sidney Crosby Saturday night? He played like a man possessed and then told Crosby to stop diving.  You are my hero Mr. Toews.  He is like the US Post Office because neither snow or rain will stop him from delivering.