The Blackhawks blow a two goal lead but still grab two points in a 3-2 win over Carolina.

Share All sharing options for: Blackhawks Overcome Injuries And Beat The Hurricanes

Friday night had letdown written all over it.  The Blackhawks were coming off their biggest win of the season, were missing three key forwards, and were playing a team from the Eastern Conference that they had no history with.  Some teams let injuries drag them down, great teams don't use them as an excuse.  The depth of the Blackhawks was tested Friday and they passed.

The Blackhawks got off to a great start Friday night, with plenty of jump in their step.  The top two lines looked great in their first shifts, especially Marian Hossa and Patrick Sharp.  The Hawks got the first seven shots on goal of the night, with the Canes not registering a shot until 11:20 of the 1st period, which ended a stretch of exactly 32 minutes of play without a shot for Carolina. Despite outshooting the Canes 11 to 4 and getting 3:28 of power play time, the game went into the first intermission scoreless.

Patrick Sharp got the Blackhawks on the board 3:09 into the 2nd period.  Michael Handzus blocked a Justin Faulk shot and the puck went quickly to Andrew Shaw who made a nice stretch pass to Sharp that sent him in all alone who put a backhand shot, top shelf, over Anton Khudobin for his 30th goal of the year.  Kris Versteeg doubled the Hawks lead at 16:26 after firing a wrist shot from the slot.  Nick Leddy and Brent Seabrook assisted on Steeger's 11th goal of the season.  Alexander Semin scored his 20th goal of the year at 19:21 after a Marcus Kruger neutral zone turnover, during an ill advised line change by Sharp and Seabrook, gave him plenty of room to beat Corey Crawford.

The Hurricanes were able to tie the game up during a two man advantage 2:58 into the 2nd period when Semin put a snap shot past Crawford for his second goal of the night. The game would only remained tied for 31 seconds.  With the Hurricanes still on the power play, Eric Staal's slap shot went wide of the net and came out to the neutral zone where Jonathan Toews beat Andrej Sekera to the puck just over the blue line and got in all alone to beat Khudobin for his 28th of the season.  The Hawks shut down the Hurricanes offense and did not allow a shot on goal for the last 9:40 of the game. Bring on the Predators and Teuvo on Sunday!

* The penalty kill has been great since the new year, but there was no need to send them out as many times as the Hawks did on Friday.  Thankfully the Hurricanes power play is an out of control tire fire or this game could have ended differently.  You will not be able to get away with six penalties against a team with a competent power play.

* I wrote in my preview that this would be the perfect night for Patrick Sharp to get on one of those goal streaks where he scores eight goals in seven games.  He was a man on a mission tonight and could have easily had more than just his lone goal.  He was on a mission all night long and finished with six shots on goal.  The Hawks depth are going to need to step up with Patrick Kane on the shelf and tonight was a good start.

* Jeremy Morin on the power play? What world do we live in???

* David Rundblad only got 8:32 of ice time but a lot that had to do with the Hawks having to kill off six penalties.  He wasn't too noticeable, but that is not a bad thing when that comes to NHL defenseman.  There was a shift in the second period where he got down by the goal line to try and join the offensive play and did a nice job getting back on defense.  He doesn't have Nick Leddy's wheels yet, but Stan Bowman would not give up a 2nd round draft pick for a bum.  I would like to see more of Rundblad down the stretch. 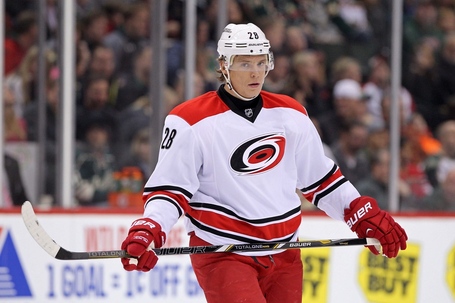 Alexander Semin was responsible for both Carolina goals and hundreds of sperm jokes on Twitter, and for that I am grateful.