Another Frustrating Loss To The Predators

The Blackhawks get blanked by the Predators and fall six points behind the Blues for the division lead.

Share All sharing options for: Another Frustrating Loss To The Predators

To say the Blackhawks haven't brought their A game against the Predators this season would be a bit of an understatement.  All season long, the Blackhawks have looked less interested in playing the Predators than most people are interested in watching them.  Sunday was a chance to keep pace with the Blues and increase the lead over the Avalanche, but the Hawks could do neither.

I feel like I have typed this 1st period summary many times before this season.  The Blackhawks dominated the play for most of the period.  The top three lines all had extended periods in the offensive zone but could not take advantage of quite a few good looks.  Per the script, the Predators would take the lead with a "dirty goal" at 18:38.  Mike Fisher stood all alone in front of the net and was able to cleanly redirect a shot from the point by Ryan Ellis, past Corey Crawford for his 18th goal of the season.  The Hawks ended the 1st period with an 11-6 advantage in shots, but trailed 1-0 in goals.

The 2nd period was more of the same; the Blackhawks spending most of the time in the Predators zone but came up with squat and Nashville would score again late.  After the Hawks couldn't score on nearly six minutes of power play time, Gabriel Bourque snapped a pretty wrist shot past Crawford at 17:35 to double the Nashville lead. Bourque's goal would be the final goal of the night as neither team scored in an excruciatingly boring 3rd period.

* Even though the Hawks got 29 shots on goal, they didn't get too many really good looks at the net.  Everyone wanted to be cute and score the fancy goal.  That doesn't work against a team like the Predators.  You have to play a "simple" game against them.  Get pucks deep, win some board battles and get some bodies in front of Pekka Rinne.  None of this happened on Sunday.

* The power play continues to drain my will to live.  I know there is no Patrick Kane right now, but it starting to become clown shoes long before he got injured.  Right now there are too many guys hanging around the perimeter making too many passes and nobody is doing anything to make the defenders move east and west.  I think its time for Kris Versteeg to be taken off the second power play unit.  At least the penalty kill continues to shine.

* How could the Blackhawks possibly with all that energy Sheldon Brookbank provided with his pointless fight with Richard Clune six minutes into the game?  Even worse than that was watching him get schooled by Mike Fisher just before he scored the game winning goal.  Jeremy Morin provided some real energy when his clean hit on Roman Josi got the Hawks four minutes of power play time.  Get well soon Rozy.

* I still can't figure out what Brent Seabrook was doing on the Predators second goal.

* Brandon Bollig is still the hero of the stupid after his wonderful boarding penalty while his team was down two goals with 8:30 left to play.

* The Saad-Smith-Morin line will forever be known as the Rockford Files line.  Those of you under 35 can Google the reference.  If you don't want to Google it, don't worry we probably won't see this line again anyways.

* Please stop teasing us and give is some Teuvo on Tuesday! 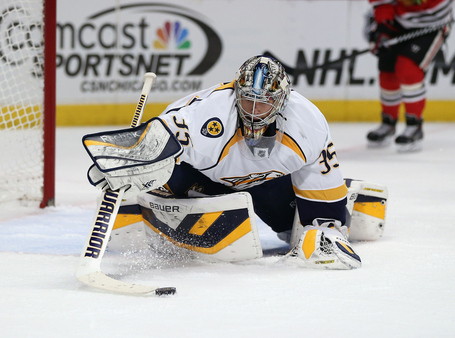 Pekka Rinne gets POTG honors because, well somebody had to....