The Blackhawks issue a big blow to the Dallas playoff hopes with a 4-2 win over the Stars.

Share All sharing options for: Love That Chicago Traffic

48 hours after a garbage loss to Nashville, the Blackhawks came out and did all the little things needed to beat a team desperate for points.  Oh,and some kid from Finland played too.

The Stars came out with a lot of energy for a team that played in Winnipeg Monday night.  Corey Crawford had to come up with some big early saves.  First he denied Ryan Garbutt, who got in behind David Rundblad, then he made a big save on a redirected shot during a Dallas power play.  Late in the period, Jonathan Toews looked like he was going to give the Hawks a lead when he was all alone in front of the net, but Kari Lehtonen made the glove save on Tazer's backhand shot.  Cody Eakin had a chance for a goal on a late period 2 on 1, but the puck jumped over his stick at the last second and then he made contact with Crawford on the fly by and was called for goaltender interference.  During the ensuing power play, Andrew Shaw would get the Hawks on the board by putting back a rebound, from his knees and while his back was to the net.  Patrick Sharp and Toews assisted on the Hockey Monkey's 19th goal of the season.

Kris Versteeg doubled the Hawks lead 4:12 into the 2nd period. Versteeg jumped on an Antoine Roussel turnover in the slot and flicked a wrist shot through Kari Lehtonen's five hole.  Marian Hossa, who skated hard to the front of the net, was originally given credit for a redirect goal, but it was changed to Steeger during the second intermission.  Brent Seabrook and Duncan Keith were given credit for the assists on Versteeg's 12th goal of the season.  Ryan Garbutt, who had a couple of good scoring chances already, cut the Hawks' lead in half at 10:56.  In a wild end to end sequence that saw Jonathan Toews miss a wide open wrap around, Garbutt was able to get behind the Blackhawks' defense and went backhand through Corey Crawford's five hole.  Duncan Keith would get the goal back a little more than three minutes later.  Andrew Shaw missed a centering attempt but Patrick Sharp corralled the puck in the corner and got it out to Keith above the circle, who ripped a shot past Lehtonen with the aid of a Michal Handzus screen.

The Hawks seemed to be on their way to a comfortable two goal win but Ryan Garbutt struck again.  He dug the puck out of the corner, took it hard to the net and stuffed his own rebound past Corey Crawford for his second tally of the night.  Marian Hossa iced the game with an unassisted empty net goal, his 26th.  This a big win with a tough road trip ahead playing in Boston, Ottawa and Pittsburgh in the span four nights.

* Sunday night the Blackhawks had a ton of time in the offensive zone and had plenty of shots, but they got no traffic in front of the net and they were shutout.  Tuesday night they made life difficult for Kari Lehtonen and got to him three times.  Shaw was in front of the net for the rebound on the opening goal and Hossa and Handzus screened Lehtonen and the next two goals.  More of this please!

* Teuvo Teravainen was not spectacular in his North American debut but he gave us plenty to be excited about.  I was most impressed with his defensive play and his overall awareness on the ice.  I really like putting him between Brandon Saad and Ben Smith, two young guys who do the little things on both ends of the ice.  He made a nice play with his stick that led to a Hawks' scoring chance in the 1st period.  He always seemed to have one skate ready to go back to the defensive zone all night long, which will endear him to his head coach.  Teuvo even got some time on the power play, which is a good idea with his vision and hands.  He also won all seven of his faceoffs.  He can do no wrong!

* Corey Crawford won this game for the Hawks in the first five minutes when he stopped the Garbutt breakaway and came up big on the early Dallas power play.  He also had to make some huge stops right after the Stars pulled within a goal.  Since his return from injury, Crow has given up two or less goals in 19 of his 26 starts.

* The Dallas 3rd line has feasted on the Hawks this season.  Vernon Fiddler, Antoine Roussel and Ryan Garbutt have combined for four goals and five assists in five games against the Blackhawks and have been a pain in their ass all season long.  Thankfully none of the other three Dallas lines bothered to get off the plane or else the result could have been different.  Losing to the Stars in March is like losing the Cubs in September; there is no excuse for it.

* What kind of a stupid world do we live in where Brandon Bollig gets more ice time than Teravianen? Yes, I know it was his first game and he is going to get the training wheels, BUT COME ON! Bollig took a dumb shit penalty early in the game then spent the rest of the night out of position, making dumb passes, not getting to the front of the net and cancelling out a goal in a way only he can.

* Dear David Rundblad, please say hello to Kim Johnsson when you arrive in the Land of Lost Chicago Defensemen.

* Glad the Blackhawks could win on the day we lost Tim Sassone.  I didn't always agree with what he said, but he said it better than any other hockey writer in this city.  For many years, he was the only reason to read about the Blackhawks as he always tried to make them important when most of the media outlets had long forgotten about them.  Reading his coverage of the Hawks while growing up is part of the reason I write about them today.  Thank you for your dedication Tim, I will never forget it. 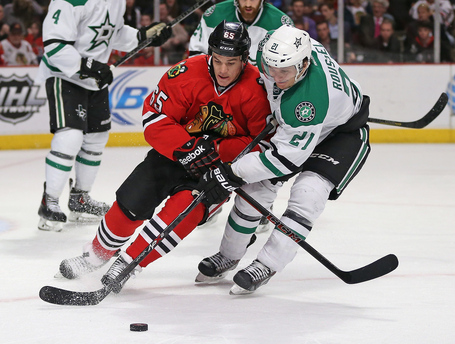 Andrew Shaw finished his night with a goal and an assist and no dumb penalties.  Right after the Hawks went up 3-1, super turd Antoine Roussel tried to goad him into a senseless fight.  I give the Hockey Monkey a ton of credit for resisting the urge to pound that pud's face into a pile of goo.