The Blackhawks close out a terrible 24 hours with an embarrassing loss in Ottawa.

Share All sharing options for: Blackhawks Show Very Little In Loss To Senators

Joel Quenneville shook up his lineup because he wanted to try "something different." Well if this is different you can keep it. The entire team looked disinterested and wanted nothing to do with playing any kind of defense.  The Blackhawks are a team in need of a wake up call and fast.

If you thought Q's line changes before the game were stupid, things got worse after the puck drop.  About nine minutes into the game Clarke MacArthur was sent to the penalty box for failing to stop and running over Antii Raanta.  Instead of gaining momentum from the ensuing power play, the Senators took the lead with a shorthanded goal.  Duncan Keith fumbled a clearing attempt right outside his blue line and Zack Smith got it to Erik Condra, who blew right by Brandon Saad and scored on Raanta.  A few moments later Raanta laid on the ice clutching his leg after sprawling out to make a save.  While Stan Bowman was on the phone with the Rockford intern telling him to get Jason Labarbera on a plane to Pittsburgh, Raanta was able to shake off his injury and stayed in the game.  Right after the faceoff, the "deterrent" Brandon Bollig decided to send a message by letting Chris Neil punch him in the face for two minutes.  Cody Ceci would double the Senators lead with just 30 seconds left in the period when his shot from the point deflected off of Matt Carey's stick and into the Hawks net.

The stupidity carried over into the 2nd period when Milan Michalek scored an easy tip in goal thanks to a great cross ice pass from Jason Spezza just 23 seconds into the frame. The Blackhawks would show some signs of life once they fell behind three goals; better late than never, I guess.  Patrick Sharp got the Hawks on the board with a power play goal at 10:46 after he tipped a slick pass from Jonathan Toews past Craig Anderson.  Antti Raanta got the secondary assist on Sharp's 31st goal of the season.  Shortly after the Hawks' first goal Kris Versteeg beat Anderson to the glove side, on a 2 on 1, but clanked the shot off the goal post.  Marian Hossa cut the lead down to onewith a goal very few people can score at 19:19.  Hossa jumped in front of a pass, split the Ottawa top defensive pair, muscled his way to the net and put a backhand shot over the pad of Anderson for his 27th goal of the season.

The Blackhawks had some momentum going into the final period but they just couldn't put together any kind of sustained effort.  Kyle Turris scored on power play goal off a juicy rebound, six minutes in, while Matt Carey sat in the penalty box for gloving the puck after a faceoff.  Clarke MacArthur added a fifth goal about five minutes later to ice the game.  Brent Seabrook would get credit for a short handed goal at 17:00 when his one timer trickled behind Craig Anderson and into the net.  Michal Handzus and Peter Regin assisted on Seabrook's seventh goal of the year.

* There was so much bad on Friday night but it all started with Q's trying "something different." I'm sorry, but when you are only one point of ahead of the Avalanche for home ice in the 1st round you shouldn't be experimenting.  Who is he exactly trying to send a message to while Kris Versteeg is still playing on the top line?  Tonight was not the night to give Matt Carey, a kid who was playing mid level college hockey just a few days ago, his first crack at the NHL.  We had to listen to Q spew some hot garbage about Teuvo Teravainen getting comfortable on the ice before the game and then he scratched him.  I could go on a long winded rant here but I will save it for a post tomorrow.

* I railed on Brandon Bollig pretty hard last night, and it would be so easy to do it again tonight, but for someone who is a "deterrent" there was a lot of shenanigans going on during his watch.  Clarke MacArthur ran over Antti Raanta while Bollig was on the ice and Marcus Kruger was the first to come to his goaltender's aid.  Guess who was also on the ice when Chris Neil gave Niklas Hjalmarsson a dirty knee to knee hit? Even when he did drop the gloves he got his ass handed to him.  So we have a tough guy who really isn't very tough.

* Andrew Shaw got ejected for spearing late in the game which calls for an automatic review by the league.  With Shaw's history you can bet that he will get at least a one game suspension.  Awesome.

* The team leaders like Jonathan Toews and Duncan Keith said all the right things after the game about how they really can and can control the game when the want to.  Then do it! This is a dead ass team right now in need of a serious slap to the face.  A team that cares plays in the middle of the ice, something the Hawks did very little of the last two games.

* Not everything was bad, Peter Regin had another solid game.  He should be playing every night.  He isn't flashy at all but he is a responsible player at both ends of the ice and has earned a regular spot. 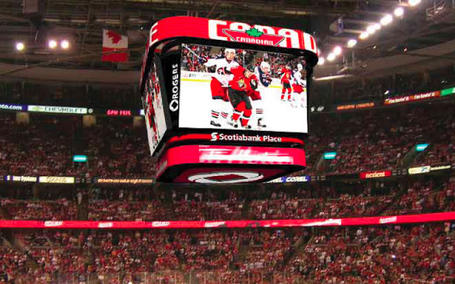 The clock on the scoreboard at the Canadian Tire Centre for finally showing all zeroes and ending that awful game.