This is a weekly feature that will run throughout the season on Mondays (and sometimes on Tuesdays). It will briefly recap the last week, preview the upcoming week in Chicago Blackhawks hockey and look at where they sit in terms of playoff contention. Additional snippets, notes, content, blurbs and oddments are subject to change week-to-week. If there is something you want to see included in this, lemme know and I will see what I can do.

After a four-week hiatus, the Holiday Road Ahead is back. Four weeks is a long time between posts. Ideally, it is enough time to forget the last one. If not, this should do the trick. Looking for it is a bad idea. It will only conjure up sad America feelings. If those feelings return, refer to the previous sentence's link.

The Chicago Blackhawks returned to NHL action on Thursday, Feb. 27. The Blackhawks lost to the New York Rangers 2-1 at Madison Square Garden. The Blackhawks outshot the Rangers 32-24 but could not score their only goal until there were 12 seconds left on the clock. New York backup goaltender Cam Talbot played well in place of Henrik Lundqvist, who was getting the night off following a silver-medal performance at the 2014 Winter Olympics in Sochi.

Soldier Field was a mess on Saturday, March 1. The weather was brutal, the gameplay was sloppy, the fans were frozen and the Plain White Ts tried their very best to be relevant. Despite all of that, the game found a way to be fun. The Blackhawks pouncing on the Pittsburgh Penguins 5-1 probably helped with that. In the first-ever Jonathan Toews/Sidney Crosby matchup, Toews came away with two goals and an assist. One of his goals looked like this. He deked out USA Olympic "defenseman" Brooks Orpik and went between the legs of Penguins goaltender Marc-Andre Fleury. Crosby did not record a point.

There are three games on this week's slate. The Blackhawks return to United Center on Tuesday for the first time since a 3-1 loss to the Winnipeg Jets on Jan. 27. The Colorado Avalanche visit on Tuesday and the Columbus Blue Jackets make their first trip to Chicago since realignment on Thursday to complete the two-game home swing. On Sunday, the Blackhawks visit Patrick Kane's future stomping grounds in Buffal-oh yeah, this joke does not work any more. Nonetheless, the Hawks will take on a stripped-down Buffalo Sabres team to finish out the week.

The Avs and the Hawks will play each other for the fourth time this season. It will be the last time Colorado comes to town this season. The three previous games have had three very different outcomes. The first game was a 5-1 shellacking of the Hawks in Denver back in mid-November. The second was a 7-2 trouncing of the Avs in Chicago in late-December. The third was a game where Chicago shot 48 pucks at Colorado goaltender Semyon Varlamov, who only let in two of them. The Hawks lost the game 3-2 in a shootout because of course they did. Each of those three games represented this Avs team in a nutshell. The Avs are more than capable of denting the net several times in one game but they are also rather proficient at getting worked over on the blueline. Varlamov can play lights out on any given night, and has done so several times this year. 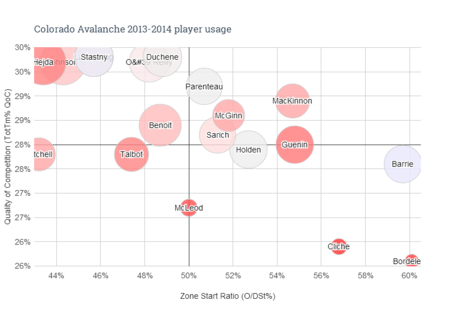 The Avs are an awful possession team benefiting from the best goaltending in the league in terms of 5v5 even-strength save percentage. The Avs are 26th in the NHL in 5v5 close FF percentage at 47.7. The only teams worse in the league than them in this category are the Calgary Flames, Edmonton Oilers, Toronto Maple Leafs and Buffalo Sabres. Colorado defensemen Erik Johnson and Jan Hejda has struggled to the tune of a 47.3 CF percentage and a 45.3 CF percentage respectively. And that is their top pairing. Colorado has won two in a row after dropping its first post-Olympic game 6-3 loss to the Los Angeles Kings, including a 4-2 win over the Phoenix Coyotes and a 6-3 win over the Tampa Bay Lightning. How this game goes very well could rest on how Varlamov plays, because the Hawks will almost certainly be driving possession.

The Columbus Blue Jackets seem to be The Little Engine That Could. Forwards Marian Gaborik and Nathan Horton, who many thought the Jackets would rely on for scoring, have been hurt almost all year. Yet the team is fifth in the Eastern Conference and 10th in the NHL in scoring. Columbus is not going to blow anybody away, not by any stretch of the imagination. But even with two of its best scoring forwards gone, Columbus has found a way to hang in the playoff race. The Jackets are only one point out of the second wild card spot as of the time of this writing. Part of that has to do with the emergence of their youth. 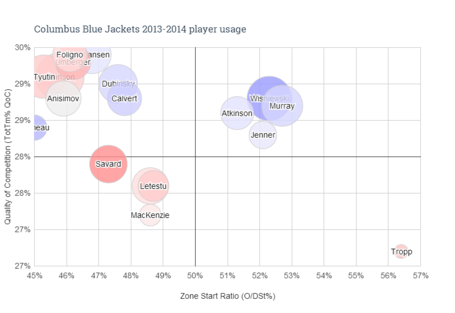 Forwards Ryan Johansen (age 21) and Cam Atkinson (age 24) and rookie defenseman Ryan Murray (age 20) have started to come into their own. Johansen has potted 24 goals, leads Columbus with 47 points and has managed to be a positive-possession player while playing some of the toughest minutes. Atkinson has 33 points and has also been a positive-possession player. Ryan Murray has spent a lot of time playing with Blackhawks legend James Wisniewski. He has had some beneficial zone starts but is only one of two positive-possession defenseman on the team, the other being Wisniewski. Goaltender Sergei Bobrovsky's stats are down a bit after a Vezina-winning season last year, but he still has a .926 even-strength save percentage, which is the same as Ryan Miller's and .002 less than Corey Crawford's.

The Jackets on the whole are a middle-of-the-road possession team, sitting 13th in 5v5 close FF percentage. The stats would suggest the Blackhawks win this game easily, but Columbus in recent years has been one of those teams the Hawks should beat but seldom put away handily. Also of slight note; the Blackhawks are without forward Viktor Stalberg, who has never scored an NHL goal against a team besides the Columbus Blue Jackets.

The Buffalo Sabres have the fewest points in the NHL this year with 44. Their leading scorers are Cody Hodgson and Tyler Ennis, each with 32 points. They traded both of their captains this season in Thomas Vanek and Steve Ott. They are last in the NHL in 5v5 close FF percentage; a lowly 41.5 percent. The Sabres do not have a positive-possession player on their roster and have only outshot their opponents at even-strength with a close score 12 games this season. Oh, and they traded their fan favorite and best player to the St. Louis Blues. The Sabres are stockpiling assets and looking toward the future but the immediate future is pretty bleak in the immediate future. 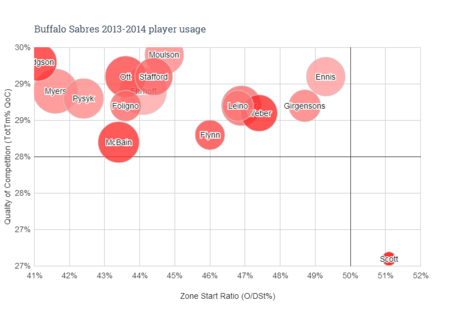 Warning: looking directly at the chart could cause severe retinal damage, similar to looking directly at the sun. The Sabres do not score. They are last in the NHL in goals. They are bottom-third in the league in goals allowed. Christian Erhoff is the only Sabres blueliner with any real respectability at this point. Without Erhoff, the young defense corps would be in shambles. Rasmus Ristolainen and Mark Pysyk are 19 and 22, respectively. Chances are, the Blackhawks' forwards should be able to devour this team's blueline. If so, it will not be pretty.

Player to watch this week

Brandon Saad - The sophomore forward has spent the majority of the season in the bottom-six but that could change, at least for the time being. Marian Hossa will miss 2-3 weeks with an undisclosed upper-body injury, which means the Red Wedding Line is currently disbanded. Brandon Saad is expected to be moved to the first line to fill the spot Hossa temporarily vacated. Hossa is bigger than Saad, but the two are not dissimilar players. Saad's monstrous forechecking ability and nose for the puck should serve him well playing with Toews and Patrick Sharp. Saad has excelled in pretty much every role he has been asked to play throughout his brief career. Saad could probably play top-six minutes right now anyway, regardless of the injury situation. This could be a good chance to show coach Joel Quenneville he deserves to stick in the top-six for good.

As many have predicted since the beginning of the season, the Conference III race looks like it will come down to the very last couple of days of the regular season. The Blues and the Hawks are tied for the division lead with 86 points and the Colorado Avalanche are only three points behind them with 83. Patrick Roy verbally conceded the division to the Blackhawks following the 7-2 loss in December but the Avs are very much in contention for the Conference III crown.

Conference III has a legitimate shot at putting 5 teams in the postseason. The Minnesota Wild and the Dallas Stars currently hold the two wild card spots in the Western Conference. Barring a total collapse, the Wild will probably hold onto the first wild card spot. The second spot is not as concrete. The Winnipeg Jets have crept up into the playoff race, sitting only two points behind the Stars. The Vancouver Canucks are falling and falling fast. They sit only a few points out of a playoff spot, but there is a good chance the Canucks miss the playoffs this year for the first time since 2007-2008.

#Cool thing of the week

This link has made its way around the internet for the past couple of days, but it is still worth sharing nonetheless. Toews makes a little kid's dream come true. Tissues at the ready. Link.

Nebraska "fun" fact of the week

Nebraska is the only state in the union with a unicameral, or one house, legislature.

A milestone along the road