Blackhawks Get Buried Despite Dominating Game

Share All sharing options for: Blackhawks Get Buried Despite Dominating Game

This game was a study in outplaying, out-possessing and out-chancing a team and still managing to lose.  The Blackhawks dominated the game from puck drop to the final horn.  Despite all of this dominance, the Blackhawks managed to shoot a lot of pucks into Seymon Varlamov's deft glove hand.

The first period ended scoreless. Maxime Talbot opened the scoring in the second period giving Erik Johnson one of his three assists on the night. Ben Smith scored a lovely goal late in the second as well. The Avalanche capitalized on bad penalties with Tyson Barrie scoring on the power play in the third period and Paul Stastny adding the empty netter as regulation closed.

The line blender was working on full speed with Brandon Saad double shifting on the first and second lines for part of the second period. Other lines were constantly juggled so it was difficult to keep track of who was on any given line. Peter Regin looked much better in this game than he has since he became a member of the Blackhawks. He will have company in the new guy club when defenseman David Rundblad, acquired today from the Phoenix Coyotes, joins the team.

As you can see from the Fenwick shot chart from www.extraskater.com the Blackhawks controlled this game. (the additions are mine) The Avs have spent this entire season getting out-possessed and relying upon a high shooting percentage and strong goaltending. This is exactly what happened here. 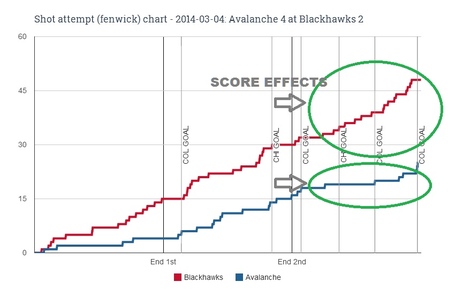 Varlamov was first star of the game with Johnson taking the second and Jonathan Toews the third. The Blackhawks play the Columbus Blue Jackets on Thursday, same time, same channel. Here are the stats for the teams on the night.