The revamped top line leads the Blackhawks to a 6-1 beating of the Blue Jackets.

I am so happy that the Blackhawks were finally able to prove to the world that they don't need Viktor Stalberg to curb stomp the Blue Jackets.  But seriously, can we get the Coyotes to move to Quebec tomorrow so these guys can come back to the Central Division?

The Blackhawks had an extra jump to their step at the start of Thursday night's game.  The Hawks' new $3.75 million dollar man, Brandon Bollig, scored just 4:12 into the game.  Marcus Kruger checked Ryan Johansen off the puck along the left dasher and flicked a high backhand shot towards the net.  Bollig was a few feet in front of the net and deflected the high shot downwards past the reigning Vezina winner, Sergei Bobrovsky.  The Blackhawks gave that goal right back when Duncan Keith and Michal Handzus got caught jumping off the ice after Patrick Sharp failed to get the puck deep.  Johansen had a one on one with Corey Crawford and went five hole for his 25th goal of the season.  About nine minutes later, Sheldon Brookbank found Andrew Shaw by banking a stretch pass off the right boards.  Shaw got in all alone and went top shelf over Bobrovsky for his 15th goal of the year.

The 2nd period turned into what we expect when the Blue Jackets come calling; lots of Blackhawks goals.  Jonathan Toews got his 23rd goal of the season, eight minutes in, after Brandon Saad undressed everyone in white on his way to the net. After he faked Nathan Norton out of his jock, he lost control of the puck but Toews was right in front of the net for the easy tap in goal.  Four and a half minutes later Bryan Bickell scored his 10th goal of the year to extend the Hawks' lead to three.  Kris Versteeg shot the puck high and wide from the right boards hoping Bobrovsky would give up a rebound, which is exactly what he did.  Bickell, who was skating hard to the net, was in the right place at the right time to light the lamp.  Andrew Shaw would get his second goal of the game about five minutes later when he tipped in a Brent Seabrook shot past Curtis McElinney, who came into the game after the Bickell goal.

The start of the 3rd period is when the Hawks take their foot off the gas, right? Wrong! The Blackhawks kept the pressure on for the full sixty minutes.  Jonathan Toews would pick up his second goal of the night, on the power play, 3:04 into the final frame.  Patrick Kane took the puck behind the net and found Toews with a backhand pass, who had an easy shot over a sprawled out McElinney.

* Remember when the Blackhawks were out of the playoffs 48 hours ago? Relax, this is a team built for the post season.

* The beats will all write about how Q pushed the right buttons with his new top line.  Brandon Saad and Jonathan Toews should play together all the time.  They are just flat out sick.  The first line finished with four goals, an assist, 12 shots on goal, a plus seven, and Toews won 59% of his draws.

* Bryan Bickell has two goals goals and Kris Versteeg has a goal and an assist in the last three games.  With Marian Hossa out for the next few games, now is the best time for these two to find their scoring touch.  Bickell and Versteeg are going to need to be post season contributors if the Hawks are going to repeat this year, so we all should be encouraged by this nice little run.  Hopefully it carries over until late June.

* Corey Crawford could easily have two shutouts in his last three games.  Brent Seabrook scored the only Penguins goal on Saturday and two veterans left him hung out to dry with a terrible line change on Thursday.  It was nice to see Crow have a big bounce back game after the disappointing outing versus the Avalanche.   I am guessing Antti Raanta will get the start Sunday in Buffalo.
* It's hard not to love the 4th line, even if it does have Brandon Bollig on it.  Marcus Kruger had two assists, was a plus three and was 7 of 11 at the dot.  Everyone misses Michal Frolik but Ben Smith has made me forget all about Taters.  How can you not love a kid who hobbles off the ice from blocking a shot in the final seconds of a 6-1 game? 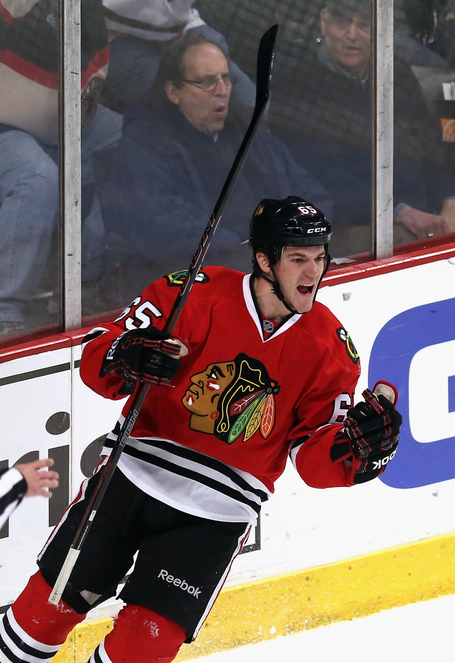 Got to go with the Hockey Monkey.  I made fart noises on Twitter when it was announced that Shaw would be on the top line but he answered the bell.  This apparently was the spark he needed to end his eleven game goal drought.  Everyone is going to remember Brandon Saad's sick stick handling on the Hawks' third goal, but it was Shaw checking the much larger Nathan Horton off the puck that led directly to the goal.