Share All sharing options for: Statistical Comparison of the Avalanche, Blackhawks & Blues

With a handful of games left in the season, the Central Division looks like it will be a tight race down the wire to determine who comes out on top.  The St. Louis Blues, Chicago Blackhawks and Colorado Avalanche are separated by a few points with the Avs holding 1 game in hand and the Blues having 2 games in hand. In order to get ready for the race and the start of the playoffs, I took a look at how the three teams stack up against each other. If you are new to the stats referred to herein, this and this may help you get a basic understanding. Of course, if you have questions, feel free to ask either here in the comments or on Twitter. 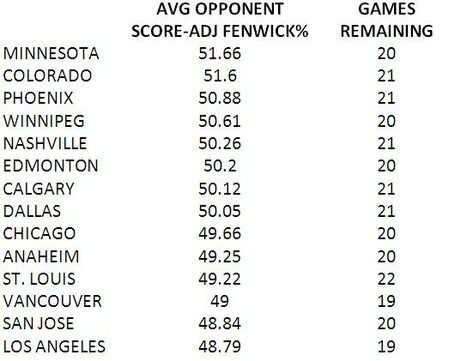 The higher the Score-Adjusted Fenwick number, the more the future opponents possess the puck. Logic dictates that if a team has the puck more often, that team can score more often. This is overly simplified but I'm sure it's not hard to follow that a team has to have to puck to score. As you can see on the list, Colorado has the toughest road ahead of them with regard to our analysis here. They are second on the list with the Blackhawks coming in 9th and the Blues sitting in 11th out of the 14 teams. The farther down on the list, the less dominating puck possession teams to be faced until the end of the season.

The Blackhawks held the top spot in the league in FF% for the first half of the season before being eclipsed by the L.A. Kings. The two teams have held those spots since that time. The Blues are also a good possession team although their rank has fallen a few spots as the season has gone on. The Avs have been lurking near the bottom of the possession rankings for the majority of the season and are not a very good possession team. Shots For percentage is similar to Fenwick For percentage and follows fairly closely in terms of data. PDO is a combination of Shooting percentage (sh%) and Save percentage (Sv%). Many consider PDO to be an indicator of luck. The PDO numbers tend to regress to 100.0 so being in the middle of the pack as far as league rankings is a good indication that the team is playing without the benefit of too much or detriment of too little luck.

The only team with a higher PDO than the Avs is the Anaheim Ducks. These teams rely on what are considered to be unsustainably high sh% and/or Sv% to succeed and thus lead many to be suspicious of the true abilities of the teams. The Avs have the 4th highest sh% in the league at 8.9%. When combined with the league leading Sv% of 94.2%, the Avs PDO becomes very inflated. The Blues have the 2nd highest sh% in the league, which is what has driven up their PDO given that their Sv% is in the bottom third of the league. The Blackhawks remain on the higher end of the middle of the pack in both of these categories. This leads to the conclusion that the sh% and Sv% numbers are a good reflection of the team's actual abilities instead of luck.

Special teams are always an important part of any playoff team, although whether the Power Play or Penalty Kill is more important is up for debate. Both the Blackhawks and Boston Bruins have recently won Stanley Cups without the benefit of a strong Power Play but with a strong Penalty Kill. If the team is one of prolific 5v5 scorers, then the PK is likely the more important.

All three of these teams have good Power Plays that have them ranked in the top 7 in the league. The Blues have a very good Penalty Kill that has been strong all season. The Blackhawks have managed to pull themselves out of the basement in terms of the PK after a miserable start to the season. The Avs have had their struggles on the PK as well.  Of the three teams, the Blackhawks are the most offensively opportunistic while shorthanded with 6 goals. Considering the team is in the top third of least penalized teams, this is even more impressive.

The Blues recently made a big splash by acquiring Ryan Miller from the Buffalo Sabres just prior to the Trade Deadline. Jaroslav Halak went the other way in the deal and eventually ended up with the Washington Capitals. The Avs picked up Reto Berra from the Calgary Flames at the deadline as well, but it would appear he will be reporting to the AHL.

Semyon Varlamov takes the cake with the best goaltending numbers of the three teams. J.S. Giguere has been pretty good in his limited starts as well. Goaltending is likely the biggest reason the Avs will make the playoffs at all. Varlamov has been forced to make a league high number of saves due to the Avs porous defense. Varlamov is having the kind of season in which it would not be out of the question to expect him to steal a playoff series or two for the Avs.

Corey Crawford has by far been the best goaltender for the Blackhawks. The time he missed due to injury allowed Antti Raanta to get some playing time and he did play well. The differences in the goalies were very easy to see. Crawford is a positional goaltender and thus is labeled as boring. Raanta is very athletic and makes some amazing saves. This tandem always makes me think of baseball outfielders. Some outfielders make spectacular diving catches while others always seem to be parked directly under the ball. It's all about positioning and anticipation. Knowing a hitter's tendencies and where the ball is likely to go the moment it comes off the bat leads to being in position for the catch. There's no need to showcase great athletic ability all the time then. Raanta makes some spectacular saves because he tends to get pulled out of position rather easily. Crawford occasionally makes such saves but they are rarely necessary due to his positioning.

The Blues got Ryan Miller in exchange for Halak, which past health issues aside, is like trading apples for apples. Both had very similar Sv% this season and in the past. Miller has been better on the PK this season and combined with the already stingy Blues PK system, they should likely continue to shutdown opposition Power Plays. Should there be some sort of injury trouble, Brian Elliott would be called upon to steer the ship. This is worrisome because Elliott has been very hot and cold over the last few seasons. Barring injury problems, Miller along with the sound defense of the Blues in front of him should not be source of worry for the team heading into the playoffs.

The Blues and Blackhawks both have very good defensive corps, while the Avs have very little in terms of defensive strength. The Blues have a few defensemen who will activate into the offense or make the outlet passes needed to spring the offense. Their other defensemen are essentially bone crushers that compliment the Blues physical style of play.

The Blackhawks are not a physically crushing team but instead are built upon speed in the transition. All of the Blackhawks defensemen are quite good at the stretch pass that makes this system work. The Avs have been trying to patch holes in their blue line for a while now. There are a few decent defensemen comparatively speaking but by and large, the corps is mediocre.

Here is a breakdown of their possession numbers and offensive production by pairing.

The defensive pairings drawing the toughest competition are above. Habit may lead some to believe that the Hjalmarsson-Oduya pairing should be in the second table; however, based upon their usage, they are the "shutdown" defensive pairing for the Blackhawks. Obviously, the defensive pairings for the Blackhawks and Blues are matching up well against tough competition. All four players are well above 50% in possession at Score Close. In a testament to team strength, the Blackhawks pairing, despite having the highest possession % of the group are actually negative relative to their teammates. The Blues defensemen have excellent offensive production as does Erik Johnson of the Avalanche.

Again, the Blackhawks pairing, this time featuring Duncan Keith and Brent Seabrook, dominate the possession numbers in this group. There is a slight decrease in the Quality of Competition faced, although it should be noted that the difference in all of these Quality of Competition numbers is very small when compared over a larger sample. The Blackhawks pairing in this group and Kevin Shattenkirk of the Blues contribute mightily to their teams' offense as well.

In the third defensive pairings, I have included the usual suspects as well as the 7th defensemen who rotate in at varying frequency. Blackhawks defensemen, Nick Leddy and Michal Rozsival have a substantial edge in terms of possession over the other defensemen in this group. Again, the differences in Quality of Competition are small and likely vary greatly from game to game with this group. The Blackhawks are one of very few teams in the league to have a 3rd defensive pairing posting such terrific possession numbers.

All of the data and statistics used herein were collected from www.nhl.com,  www.extraskater.com and www.nhlnumbers.com. In follow up to this look at the three teams vying for the top spot in the Central Division, I will break down the forward lines and combinations. Look for that in the next few days.