Jhonas Enroth did everything he could to help his team to a win, but in the end the Blackhawks leave Buffalo with a 2-1 victory,

When you looked at the this matchup on paper you would think the Blackhawks would win 308-0.  As my father, God rest his soul,  used to say that is why you play the games.  The Hawks did not give the Sabres a beating like they did to the Blue Jackets on Thursday.  Buffalo is not a good team, but they are a team full of new components which must be hard to prepare for.  Sure it wasn't a dominant victory, but it was a victory nonetheless and we are at the point of the season when that is all that matters.

Patrick Kane opened up the scoring Sunday night, 3:12 into the game. Patrick Sharp chipped the puck ahead in the neutral zone where Kane used one hand to get the puck past Christian Ehrhoff.  Once in the zone he used Mike Weber as a screen as he shot back to his right while skating left, up and over the shoulder of Jhonas Enroth.  Johnny Oduya picked up the secondary assist on Kane's 28th goal of the season.  It looked like the Sabres tied the game about three minutes later when Tyler Ennis took the puck away from Corey Crawford, ten feet in front of the net and put it over the goal line.   Ennis got his stick up around the hands of Crawford and was called for hooking, which was a very weak call that nullified the goal.  Drew Stafford did score a goal that counted at 9:11 to the tie the game.  Cory Conacher got Crawford down and out of the crease and made a pass across the blue paint finding Strafford for his 11th goal of the year.

Both teams got plenty of time with the man advantage in the 2nd period, but the game remained tied at one going into the 3rd.  The new top line gave the Hawks the lead 1:34 into the 3rd period.  Andrew Shaw made a nice cross ice saucer pass to Brandon Saad, who quickly found Jonathan Toews, stopping at the side of the night for his 25th goal of the season.  The Sabres, to their credit, did not fold after the Toews goal and gave the Hawks all they could handle for the last 18 plus minutes of the game.  In the end, the Blackhawks left Buffalo with two points; mission accomplished.

* Corey Crawford tried to be extra aggressive at the start of the night and it cost him early.  He gave up one goal by coming out of his crease and it should have been two, but he was bailed out by a soft penalty call.  Crawford wouldn't be tested much in the final 40 minutes, only having to face 13 shots, but he settled down and made the big saves when he had to.

* The power play continues to trend downward but, thankfully, the penalty kill is getting back to the level we saw through most of last season.  The Hawks were only able to get four shots on goal in four power plays.  They did hit two goal posts on the same power play in 3rd period but could not light the lamp.  On the flip side, the PK unit only gave up five shots on goal during five Buffalo power plays.  The Hawks' PK is up to 81.1% which is 19th in the league.  Not bad considering they were dead last for most of the season.  If I had to choose between a deadly power play or a shutdown penalty kill I would take the penalty kill every time.

* Patrick Kane is from Buffalo? When was someone going to tell me???

* David Rundblad made his Blackhawks debut Sunday night.  He only got 7:38 in ice time.  I know people will scream about Q not wantng to play young players and trying to stick it to Stan Bowman, but a third of the game was played on special teams.  I didn't really notice much out of Rundblad, which isn't a bad thing.  I feel that NHL defensemen and NFL offensive linemen are the same; you only notice them if they do something extraordinary or if they make a terrible play.

* Peter Regin continues to be "meh."

* Brandon Saad and Jonathan Toews should never be on different lines.  Saad knows where Toews should be on ice and Toews is always in the right place.  I can't wait for when the offense struggles in the playoffs and we get to see Saad skate with DDN. 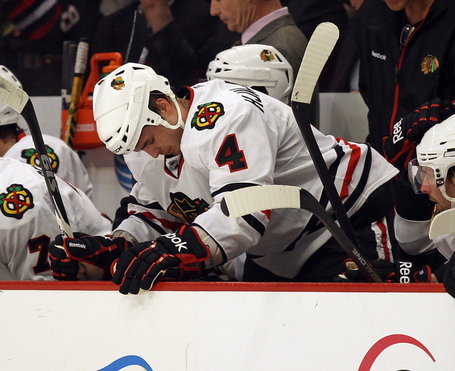 If you read my writing at my old site you'd know I was not a Niklas Hjalmarsson fan.  I was willing to drive him to the airport after the 2012 season but he has made a huge turnaround in his game and has become the second best defenseman on this team.  Hjammer is a warrior.  In one sequence, he was hobbled by a blocked shot but he stayed on the ice a blocked another shot in the same exact spot. To nobody's surprise, Hjalmarsson did not miss a shift.  He also made a huge shot block in the final seconds of the 3rd period that prevented a game tying goal.