Updates On The Blackhawks, Avs & Blues

Share All sharing options for: Updates On The Blackhawks, Avs & Blues

With 2 games left for the Blackhawks in the regular season, we start looking forward to the playoffs and back on the regular season performance of the team. The last bit of the season has brought injuries to many teams and particularly to the Chicago Blackhawks, Colorado Avalanche and St. Louis Blues. One of the two latter teams will be the Blackhawks opponent in the first round of the playoffs, so we'll take a look at how they have fared over the last several games and without some of their players. The Olympic break provides a nice starting point for this overview, so most of the information below works only within that time frame. You can click on the images to view them in a larger size.

Missing Pieces: Jonathan Toews (arm), Patrick Kane (knee) - both expected to return for the start of the playoffs.

*All Injured Player Information Is On The Season

Below is the Usage Chart from the statistics site www.extraskater.com.

Blue of any shade = positive possession numbers, i.e. has the puck more than opponents 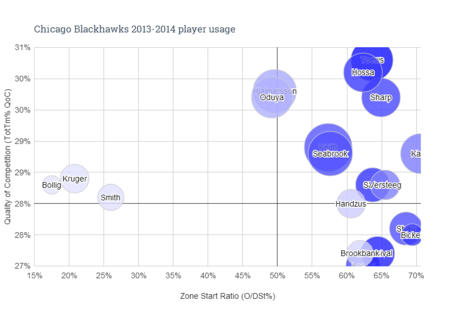 Chicago, 55.2%, ranks 2nd in the league in Fenwick For Percentage (FF%) at Score Close, which is essentially a proxy for puck possession. The Blackhawks PDO (sh% & Sv% = measurement of luck) is 100.4, ranking them 11th in the league. It is commonly held that PDO regresses back to 100.0 due to a team's luck balancing out. This is not written in stone, but is helpful to determine if a team is succeeding by overachieving in shooting and/or goaltending.

Hot Hands: Jeremy Morin, who has 3 goals in the last 3 games along with excellent possession numbers; Ben Smith, who has 6 goals since the break; Patrick Sharp, Marian Hossa and Andrew Shaw have also been picking up their goal scoring as of late. 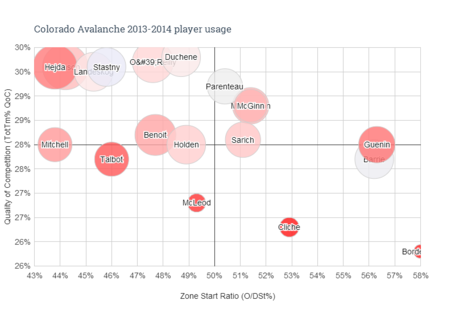 Hot Hands: Gabriel Landeskog, who has been heating up the score sheet as of late with 8 goals since the break; Ryan O'Reilly and Paul Stastny, also on the first line for Colorado, have been contributing well at 5 on 5 and the power play. Defensemen, Nick Holden and Tyson Barrie, have also chipped in with 6 and 5 goals respectively since the break.

Missing Pieces: Vladimir Tarasenko (hand), David Backes (foot). Tarasenko underwent surgery to repair his hand and is expected to return to the team around the second round of the playoffs. Backes is expected to miss at least one more game and is listed as day to day. 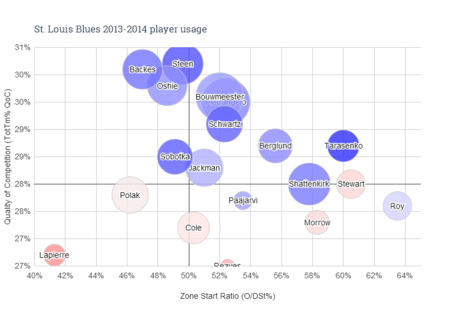 The teams have played 20 (CHI), 21 (COL) and 22 (STL) games since the Olympic break. Below is a chart of the FF% (Fenwick For Percentage) for each team in each of those games with the score close (within 1 goal in periods 1 and 2, tied in the 3rd period). 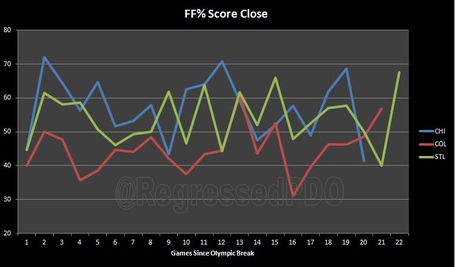 Here is a graph of the Sv% (Save Percentage) at score close over those games for the teams. 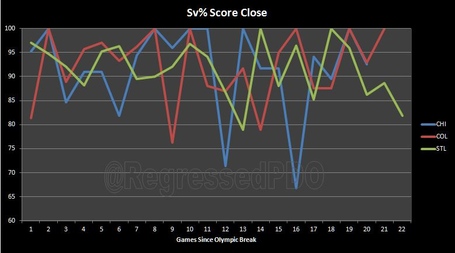 The next few games will cement the post season matchups for each of these teams. Until then, Chicago will play the Washington Capitals and Nashville Predators. The Colorado Avalanche will play the Vancouver Canucks, San Jose Sharks and Anaheim Ducks. The St. Louis Blues will play the Minnesota Wild, Dallas Stars and Detroit Red Wings to close out the regular season.