Blackhawks Hold Off Blues To Get Back Into The Series

Corey Crawford keeps the Blues off the board and gets his team the must needed victory.

Share All sharing options for: Blackhawks Hold Off Blues To Get Back Into The Series

There was a lot of chatter since Game 2 ended that Monday night was going to be a blood bath.  I am happy to say we got the exact opposite and that is good news.  The Blackhawks have yet to play a complete game and could be up 3-0.  As encouraging as that is, they are still down 2-1 and have a lot of work to do.

The United Center was rocking from the get go after a spirited National Anthem.  The Blackhawks came out flying and dominated the possession over the first few shifts.  Jonathan Toews would get the Hawks on the board as his shot from the top of the left circle went right between Ryan Miller's legs at 4:10.  Duncan Keith and Sheldon Brookbank picked up the assists on Toews' first goal of the playoffs. The Hawks seemed to get a little sloppy after taking the lead.  The gave the Blues two power plays in the first but the penalty kill and Corey Crawford stood tall to keep the 1-0 lead heading into the first intermission.

The Blues would take four penalties in the 2nd period, including giving the Hawks a two man advantage for 37 seconds but the Chicago powerless play could not tally the important second goal.  Corey Crawford stopped all eight shots he saw as the Blackhawks headed back down the tunnel still clutching a 1-0 lead.

If it wasn't for the different colored jerseys, I would have thought I was watching the 3rd period of the first two games.  The Hawks looked contempt with a one goal lead and had no offensive pressure throughout the period.  Meanwhile, the Blues kept coming and coming.  This time the Blackhawks and Corey Crawford did not give up the late game tying.  Marcus Kruger made up for a dumb penalty earlier in the period by scoring an empty net goal with 20 seconds to go for the victory.  Brandon Saad picked up his fourth primary assist of the series and Michal Handzus was credited with the apple. The first win of the series is nice, but we will need to see a better effort Wednesday to tie this bad boy up.

* Jonathan Toews is having himself a heck of a series.  He has shown no ill effects from the arm injury that kept him out of the last six game of the regular season.  He is sporting a nice shiner thanks to Ryan Reaves but nothing seems to slow him down.  The captain has been a monster at the dot.  He won 19 of his 24 draws in Game 3 and is 67.5% for the series.

* The Blackhawks are winning 55.9% of their draws which is by far the best in the playoffs so far.  It's the little things like this that can go far in a series.

* From the good to the bad; the power play.  It isn't that they aren't scoring, it's that they aren't even close to scoring.  The Blackhawks have eight shots on 14 power plays.  You don't have to be a brain surgeon to figure out that isn't going to cut it.  Nobody is doing anything to get the St. Louis defenders moving side to side and getting out of position.  Not converting killed them in Game 2 and nearly did them in on Monday night as well.

* Sheldon Brookbank had a solid game, much better than he looked when he had to be called into service thanks to Duncan Keith's high stick on Jeff Carter last season.  Brookbank played a ton down the stretch which helped him to be able to jump right into the mix.  His positioning was solid all night long and never felt like a liability at any point.

* Michal Handzus was well deserving of the 3rd Star honor.  His work on the penalty kil was key to the Hawks' win.  I have no problem with Handzus playing when he contributes on the PK like he did Monday, I just don't want him on the 2nd line anymore.  As both Jen and I mentioned on Twitter, just swap him with Ben Smith and all will be right in the world.  Well maybe not, but Marian Hossa and Patrick Sharp would love it.

* Ryan Miller has let in a couple of softies so far. Something to be monitored, that is for sure. 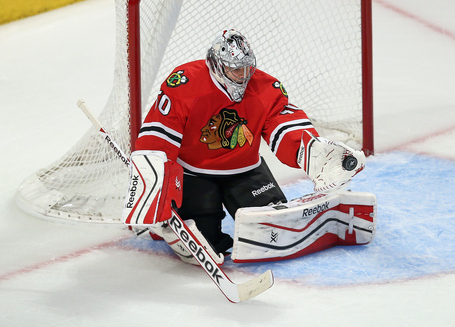 Coach Q had a rare one on one meeting with Corey Crawford before Game 3 and would say he responded rather well.  Crow took the brunt of the blame for Game 2's loss, but he deserves all the credit for Game 3's win.  Wonder if I will hear any dopes saying the Blackhawks need Jonathan Quick on sports radio during my morning drive?

Extra Skater is down, so the advanced stats would be up until tomorrow morning.