A Closer Look At Kris Versteeg

Share All sharing options for: A Closer Look At Kris Versteeg

When Kris Versteeg was returned to the Chicago Blackhawks in mid-November, many thought that the move was terrific given the salary terms, the players that went the other way in the trade and frankly, a bit of excitement over getting the band back together from the 2010 Stanley Cup run. Versteeg is a lovable character after all. Since he has arrived, the nostalgia has turned to questions about his effectiveness.

Versteeg has been used on virtually all of the forward lines with the exception of Marcus Kruger's checking line. He has seen time on the Power Play, both when it was working well and when it has struggled. In 63 games played during the regular season, Versteeg has averaged about 14 minutes a game with 10 goals and 19 assists. His Points per 60 rate of 1.43 places him right between Ben Smith and Bryan Bickell. His Corsi For Percentage (CF%) at Score Close was 54.8% leading to a +0.1% CF% Relative to his teammates.

The Blackhawks fowards' possession stats are from the last four games versus the Blues are below. They are listed from highest CF% Rel at Score Close to lowest for each game.

Prior to game 4, the Blackhawks had not looked very good in terms of puck possession. Game 2 was a bright spot but ended in a tough loss. Versteeg has not been immune to this by any means ending up near the bottom of the forwards in possession in Games 1 and 3. He has had some decent stretches of hockey in those games and there is probably no way he sits out any of the games coming up. He had a pretty strong possession game in the 4th meeting in the series.

Here's a look at some of the possession stats for Kris Versteeg over his career and for this season: (click images to view larger)

To give this chart a little perspective, here is one for Patrick Kane.

Obviously, Kane gets a lot more shots off than Versteeg when he is on the ice.

I broke down Versteeg's time on ice while at 5v5 with his teammates this season so we can look at how each of those players does with him and without him on the ice and have a sense of the time spent together. 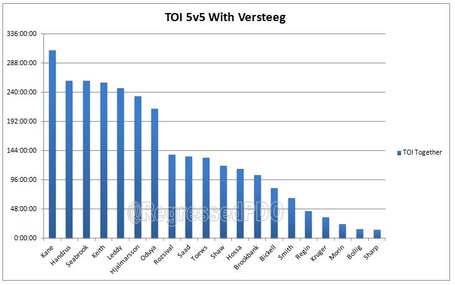 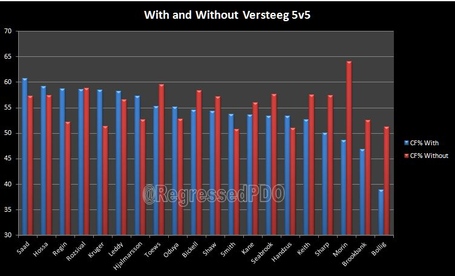 For easier comparison, I broke these into graphs with other players based upon ice time groupings. The first group of players are those with over 200 minutes of ice time with Versteeg at 5v5. Here is how they fared. 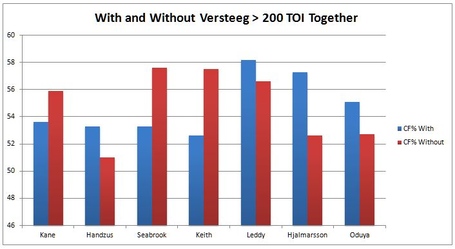 Michal Handzus, Nick Leddy, Niklas Hjalmarsson and Johnny Oduya all have better possession numbers with Versteeg on the ice with them than without. Much of this is a function of usage. Versteeg tends to start out of the offensive zone and neutral zone much more frequently than players like Marcus Kruger. The fact that Kane, Duncan Keith, and Brent Seabrook all have poorer possession numbers when on the ice with Versteeg is telling from a more neutral possession perspective since all of these players have similar zone starts. Kane has the most TOI with Versteeg of anyone on the team and shows an increase in possession without him on the ice. 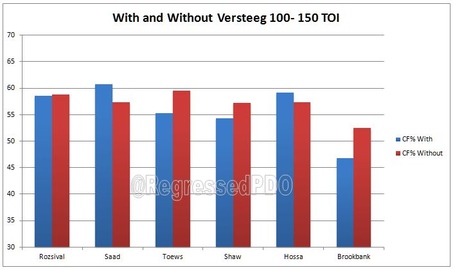 Marian Hossa benefits from being on the ice with Versteeg a bit due to a change in the Quality of Competition they face. Shaw and Toews, both strong neutral zone players, tend to do better away from Versteeg. Saad does have better numbers with Versteeg. Saad is a very strong neutral zone player, among the best on the team, and when Versteeg gets him the puck or joins him on the rush instead of dumping it in, the two have some success.It was apparent in game 3 that the neutral zone play for the two was an issue but seems to have improved some in game 4. 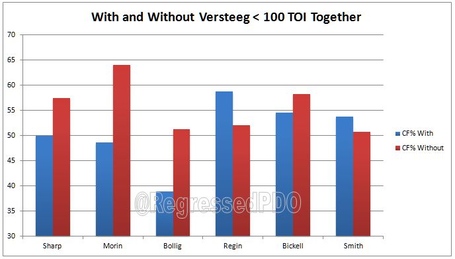 Because these players have the small sample size for us to work with, it is a bit of a challenge to come up with meaningful results. Take from this what you will because there is not much to these numbers that can be explained independently of matchups and opponents due to the short time these players were on the ice together.

Here is Versteeg's offensive production over the past several years. I have omitted last season's numbers for Versteeg as he was injured early in the season. 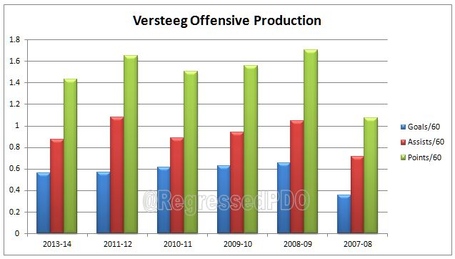 All in all, it would appear that Versteeg is meeting his career numbers in goals but his assist rate is down a bit from his 2011-12 season. His points per 60 is also down a bit as well. These are not huge changes and certainly not something that would not have been foreseeable with him given his return from injury.

The neutral zone really seems to be the biggest issue of trouble for Versteeg. Some games he looks terrific between the blue lines and others, he constantly dumps the puck or turns it over repeatedly in the neutral zone. In the right system and/or with the right direction, Versteeg's penchant for dumping the puck can be controlled to an extent. Putting him on a line with a strong neutral zone player with instructions to have that player on the puck at or near the red line seems to help in this regard. It can certainly be seen depending upon which line Versteeg is on. In fairness, he does seem to be tasked with dumping the puck and putting pressure on to retrieve it alone while other teammates change. This does hurt his percentages somewhat due to being the victim of the offensive strategy.

Versteeg is probably best used on a depth line with a player who is strong in the neutral zone and a player who likes to create net front traffic. Versteeg does tend to make good passes from near or below the goal line so a set up such as the aforementioned would likely help optimize his abilities.

*all data used herein was collected from the following sources: