Jonathan Toews nets the game winning goal in overtime to give the Blackhawks a 3-2 series lead.

Share All sharing options for: Blackhawks Win Third Straight Over The Blues

The Blackhawks needed to win one game in St. Louis in order to move on to the second round.  Mission accomplished.  The Hawks can close out this series Sunday afternoon and give St Louis a case of Deja Blues.

The Blackhawks started the Friday night's game with the lines they ended with on Wednesday, but had the same early results as they did in Game 4.  Most of the action was in the Hawks end except for when Duncan Keith was in the box for holding and Marian was called for tripping after Vladimir Tarasenko took a page out of the Ryan Kesler playbook of diving.  Despite having having four minutes of power play time the Blues only had one shot on goal in the first ten minutes.  The Hawks got on the board at 16:11 when Bryan Bickell deferred to Marian Hossa on a 2 on1.  Hossa followed his shot from the slot and was rewarded with a juicy rebound that he put back in past Ryan Miller.  Niklas Hjamarsson picked up the secondary assist on Hossa's first goal of the series.

The Hawks started the 2nd period with some great puck possession and an early power play for Barret Jackman being, well Barret Jackman.  As we should have expected the Blackhawks could not score and the Blues started to sustain some pressure in the Hawks zone.  Alex Steen made a great pass to TJ Oshie, from the boards, while withstanding a big hit from Bryan Bickell.  Oshie deked his way past Niklas Hjalmarsson, fell to his knees and still scored past a sprawled out Corey Crawford to tie the game at 11:04.   The Blackhawks did not fall back on their heels and they answered just over six minutes later. Ben Smith worked for the puck behind the net , then went out in front, picked up a Sheldon Brookbank blocked shot and went top shelf with his backhand for his first goal of the series.  Patrick Kane was credited with the secondary assist.

Of course the Blues would tie up the game and force overtime for the fourth time in this series.  At least they did it 1:42 into the period and not in the final seconds.  Nick Leddy got caught in deep and missed the net with his shot. With no forward covering Leddy's vacated spot Jaden Schwartz began a 2 on 1 the other way where he passed to Alex Pietrangelo who put the puck past Corey Crawford for his first goal.  The Blues would get another chance on a 2 on 1, but Crawford made a great diving stick save on TJ Oshie.  Patrick Kane had a great chance from the slot, late in the 3rd period, but Miller came out of his crease to stop the one timer.

The Blackhawks would finally get their first win at the Scottrade Center 7:36 into the extra time.  David Backes took a shot from the top of the right circle and Crawford made the save.  Duncan Keith flicked the rebound towards center ice where Jonathan Toews came on during a late line change behind play.  With Toews in behind both Jay Bouwmeester and Kevin Shattenkirk, he dipped his shoulders and went forehand/backhand for the game winning goal.  The Hawks can close it out on Sunday on home ice, hopefully went Brent Seabrook scoring the series clinching goal.

* We are living in some wonderful hockey times.  Having Jonathan Toews and Patrick Kane on the same team is a once in a generation experience, if you are lucky, so enjoy while we have it.  I think of the days when Martin Lapointe wore the C and it makes me cherish these last few years even more.

* So David Backes returned, cross checked Marian Hossa from behind after he scored and finished -2.  Welcome back, Dave!

* Thank you Joel Quenneville for finally switching up Ben Smith and Michal Handzus.  Smith has gone from an  early season healthy scratch to a very important piece to this playoff run.  This kid just works his ass off in both zones and he earned his goal tonight.  How Brandon Bollig got a contract extension and Smith doesn't have one yet just blows my mind.

* Speaking of Bollig, he played a grand total of 4:18 Friday night.  If you don't trust him, why dress him?  At least Ken Hitchcock still dresses Ryan Reaves so it's not like we are down a forward.

* This series could be over if the Blues could actually hit the net in clutch moments.  Gripping the stick a little too tight, are we?  The Blues have missed 82 shots (Hawks have missed 59) in five games, 15 of those are from Alex Steen.  It seems that every time they get in close they shot the puck wide or over the top of the net.  The biggest difference in the last three games is that the Hawks have cold blooded killers like Toews and Kane and the Blues don't.
* Niklas Hjalmarsson is the reason why there needs to be two post season awards for defensemen.  It seems that the best offensive defenseman wins the Norris these days.  Give those guys the Bobby Orr award and leave the Norris for the defensive guys like Hjammer and Marc-Edouard Vlasic.   Hjalmarsson is a beast in his own end and finished his night with six blocked shots, bringing his series total up to 11.
* #DejaBlues is more than just a catchy hashtag and CSN Chicago has the proof. 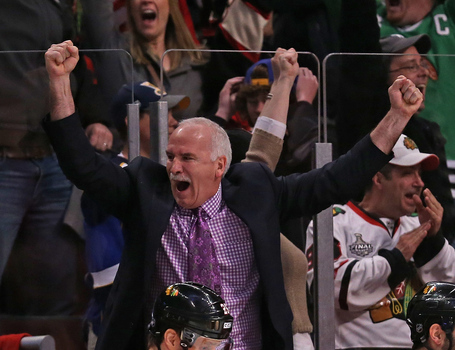 Going to give this one to Q, who has made the better game to game adjustments out of the two coaches.  He put Marian Hossa on the top line and he scored the first goal of the game.  We have been begging to see Ben Smith on the 2nd line and he scores.  Even the the new 3rd line combination of Andrew Shaw, Marcus Kruger and Brandon Saad looked good at times.  Saad had his best all around game in quite some time Friday night.