The Blackhawks used a 3rd period power surge to finish off the Blues after falling behind 0-2.

Share All sharing options for: Blackhawks Beat Blues, Advance To Second Round

Boy, what a difference a week makes! After Game 2 there was a lot of anger and doubt in the world of Blackhawks hockey.  The Hawks were down 2-0 and Brent Seabrook was facing a three game suspension for his hit on David Backes.  Every time you are about to write off the Chicago Blackhawks they raise the bar and show everyone why they are champions.

It didn't take very long for Brent Seabrook to make his presence felt on Sunday, as he helped to open up the scoring at 4:21. Seabrook took a wrist shot from the point with Bryan Bickell perched in front of the net to deflect the puck past Ryan Miller.  Duncan Keith picked up the secondary assist on Bickell's second goal of the series.  The Blackhawks would maintain puck possession and spent a good amount of time in the offensive zone before having to kill off a pair of Marcus Kruger penalties.  Despite not scoring with the man advantage, the Blues started to apply more pressure on the Hawks.  They drew even at 16:28, when TJ Oshie put a slap shot past Corey Crawford thanks to a nice behind the net feed from Alex Steen.

The 2nd period is where Game 6, and ultimately the series, was won and lost. The Blackhawks gave the Blues four power plays during the period and were outshot 17-3 and yet the game remained tied going into the 3rd period.

The Blackhawks wasted no time taking control of the game in the 3rd period.  Jonathan Toews scored on the power play just 44 seconds into the frame.  Toews snapped the puck past Miller from the slot after he was fed the puck from Duncan Keith and took advantage of all the space given to him thanks to Roman Polak's breakdancing moves on the ice.  A little over a minute later Patrick Sharp broke free on a breakaway and was able to push the puck underneath Miller while being hit in the face with Kevin Shattenkirk's stick.  Andrew Shaw increased the lead to 4-1, at 7:30, when he deflected a Duncan Keith shot into the St. Louis net.  Keith himself would put the final nail into the Blues' coffin when he scored on a 2 on 1 with Andrew Shaw at 17:05.

* Funny how you don't see too many complaints about how much money Bryan Bickell is being paid these days.  I don't know how many times I've had to tell people that he is paid for what he brings to the playoffs, you know, when it matters the most.  I will gladly take the mediocre regular seasons for the beast that is Playoff Bickell.  He is getting to the front of the net and finishing his checks all over the ice.  He absolutely demolished Alex Pietrangelo on two straight shifts early in the game.

* The penalty kill was amazing this series and was a huge key to the victory.  They killed off 93% of the penalties they took in this series including six of them today.  Thinking they can keep up this pace is a bit unrealistic but then again last year's team finished with a 90.8 PK% in the playoffs so anything is possible.  They gave up 11 shots on goal while short handed, which is pretty good considering they were out there for ten minutes. But, as good as the penalty kill has been that doesn't mean they need to be used as much as they were in this series.

* Duncan Keith and Brent Seabrook were fantastic Sunday.  They combined for six points and a +6  and both spent a lot of time on the ice while the team was shorthanded.  Keith had an extra jump to his step all afternoon long.  I lost count of how many times he kept the puck in the Hawks zone during the course of the game.  Having those two guys contribute to as much of the scoring as they did only angered Blues' fans more, which is glorious.

* Kris Versteeg finally found his way to the pressbox but I don't expect to see him stay there very long.  This was probably one of Q's "sending a message" scratches like he did with Bryan Bickell and Brandon Saad in the regular season.  Quenneville has to come up with something to put together a 4th line he can actually use.  You are not going to go far playing only ten forwards every night.

* Now we need to root for the Wild and Avalanche to go seven games and play multiple overtimes along the way. Obviously, I would rather see the Wild but the Avalanche aren't exactly scaring me with they way they are playing defensively and their lack of a power play.  I know everyone is thinking that Hawks had their troubles with the Avs in the regular season, but as this last series just proved; the regular season doesn't mean squat this time of year.

* Next season, when Stan Bowman doesn't make a big trade at the deadline, just remember what St.Louis gave up for Ryan Miller and Steve Ott.  That was a awful lot to pay for just two playoff victories.  It will be even more costly when Miller is playing in a different city next season. 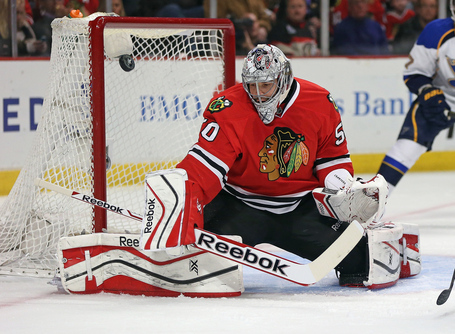 Once again Corey Crawford shows that he is a legit number one goalie.  He might not be the greatest goaltender in the world, but he keeps you in nearly every game.  He won this game in the 2nd period by making 17 saves including quite a few in heavy traffic.  Crow threw himself under the bus after Game 2 and responded with four straight wins.  I will take Crawford over the "world class goalie" Ryan Miller every day of the week.

Advanced stats will be added later in the evening.