Once again, the shorthanded Blackhawks keep it simple and earn a nice win over the Blue Jackets.

The Blackhawks took the ice against the Blue Jackets, who are desperate for every point, with no Jonathan Toews, Patrick Kane, Johnny Oduya or Corey Crawford. And yet, for the second time in 24 hours, they leave the arena with two points.  You have to love the response this team has given playing without two of the best players in the game.  The other stars, like Marian Hossa and Patrick Sharp, are doing their thing while the role players are stepping up as well.

The Blue Jackets, in their fantastic third jerseys, got on the board very early Friday night. Brent Seabrook got caught out of position (weird, right?) which gave R.J. Umberger plenty of room to shoot.  Antti Raanta made the save but gave up a huge rebound that went right to the stick of Derek MacKenzie for an easy goal, his ninth on the year.  Jeremy Morin would tie up the game at 17:10 when he sniped a wrist shot from the top of the right circle, through an Andrew Shaw screen, and past reigning Vezina winner Sergei Bobrovsky.  Patrick Sharp and Michal Rozsival assisted on Morin's second goal of the season.

The 2nd period got off to a worse start than the 1st as it only took the Blue Jackets 36 seconds to score.  Ryan Johansen shot the puck from nearly the exact same spot Morin scored from and Antti Raanta looked like he was swatting flies.  The Blackhawks would tie up the game with a power play goal from Patrick Sharp at 4:14.  Sharp blasted a slap shot from the top of the right circle with some help from an Andrew Shaw screen. Sound familiar? The Hawks would catch the Jackets on a line change to take a 3-2 lead at 10:42.  Duncan Keith quickly got the puck up to Kris Versteeg at the blue line, who made a nice touch pass to a streaking Marian Hossa.  Once behind the Columbus defense, Hossa put a backhand shot between Bobrovsky's legs for his 28th goal of the season. The Jackets would tie the game up with a power play goal just over two minutes later.  Artem Anisimov scored from the side of the net after a nice set up from former Blackhawks defensemen James Wisniewski.

The Blackhawks did a nice job shoring up their defense in the 3rd period, limiting Columbus to just six shots on goal during the final 20 minutes.  The Blue Jackets had early period magic in the first two periods, but the Blackhawks would dial up some late period magic to cap off the night.  Duncan Keith flicked a shot towards the traffic in front of the Columbus net.  Ben Smith was able to push the puck over the goal line during the mad scrum to give the Hawks a 4-3 lead with just 3.7 seconds left in the game.

* If the Blackhawks continue to play this simplified brand of hockey when 19 and 88 return good things are going to happen. You don't always have to out skill you opponents, you just have to out work them.

*  The third line of Bryan Bickell, Peter Regin and Jeremy Morin was good Thursday night against the Minnesota Wild and they were fantastic Friday night in Columbus.  They combined for ten shots on goal including five from a rejuvenated Bickell. There is no reason why this line should be split up for the remainder of the regular season.  It's going to be awful to watch Brandon Bollig cough up the puck in his own end and take dumb penalties while Regin and Morin are healthy scratches during the playoffs.

* The Blackhawks have done Antti Raanta a disservice by not sending him to Rockford to play every night.  He is not the same goaltender he was back in December.  Raanta's rebound control was an absolute joke Friday night and he was lucky he didn't give up more than the three goals he did.  I can't blame him for looking rusty, he needs to be on the ice more.  Ever since Corey Crawford returned to the lineup, I said it made much more  sense for Raanta to start in Rockford while Jason Labarbera backed up Crow.

* The broadcast team made a big deal about Bryan Bickell sticking up for Peter Regin after Jared Boll hit him high.  You know what will stop teams for taking runs at your players better than getting into fights? Scoring on the ensuing power plays, like the Hawks did tonight.

* Kris Versteeg's assist on the Marian Hossa's goal is the perfect example of why he is so frustrating to watch.  He has great vision and amazing touch but he doesn't use it enough.  Please, for the love of thin crust pizza, stop trying to be so cute and just make the plays that are given to you.

* It appears that Brandon Saad has hit that "I've never played an 82 game season before" wall. 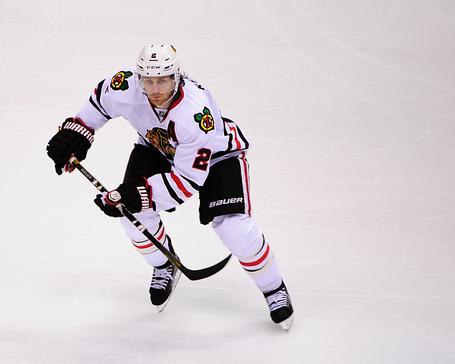 Even though the top defensive pairing has left much to be desired of late, Duncan Keith rang up three assists Friday night.  He now has 30 assists against the Blue Jackets in his career.  Do you think he misses them in the Central Division?

Extra Skater is have some technical difficulties so the advanced stats will be added tomorrow moring.