Share All sharing options for: Using Shots For Percentage

Possession statistics and the data that allows us to use them only reach back to the 2007-2008 season. Prior to that time, total shot attempts were not tracked and cataloged into a usable format thus making the task of taking a statistical look at a team's past performance very difficult. One method that has been used to get a general idea of a team's overall possession game is SF%. SF% is Shots For Percentage. Shots for and Shots against in a game total 100%. A team's Shots For are then turned into a percentage of the shots taken in a game. The math is quite simple but I explain because the concept and what it can reveal may be new to some hockey fans.

A team has to have the puck to shoot it so without more expansive data prior to the 2007-2008 season, we must make what we can of the data we have. SF% can be used to gauge puck possession. The more a team possesses the puck, the more chances to score and thus win. SF% does not tell the whole story because obviously, a hot goaltender can steal a playoff series, but it is a useful tool.

Recently, Tyler Dellow (@mc79hockey) publicly shared a spreadsheet with SF% for all NHL teams that goes back to the 1997-1998 season. This data goes back further than any other information we have previously had convenient access to and thus can give some insight into the history of a team's puck possession game. Using that data, I put together some graphs in order to get a visual. 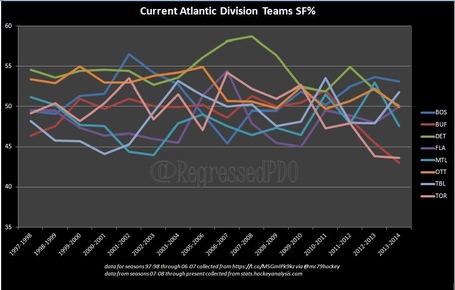 The dominance of the Detroit Red Wings is obvious for over a decade in this graph. It is no surprise that other teams, such as the Chicago Blackhawks, have patterned their game after this team. The rather percipitous drop of the possession game for the Toronto Maple Leafs is astounding. For years, the team hovered around the 50% mark but since the 2009-2010 season, their possession game indicators have dropped like a stone. The dramatic spike for the Tampa Bay Lightning coincides with their Stanley Cup winning season in 2003-2004. 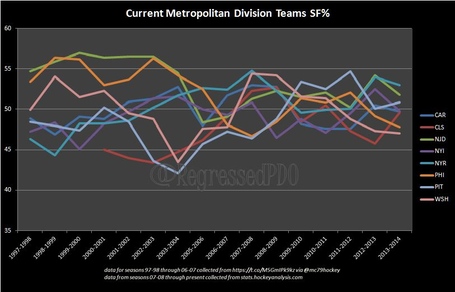 Both the Washington Capitals and Pittsburgh Penguins bottomed out in 2003-2004 and spiked up quickly thereafter. The reason? Alex Ovechkin was drafted in 2004 and Sidney Crosby was drafted the following season. The New Jersey Devils early dominance, drop and slow resurgence in SF% is also notable here. The teams now in this division seem to be getting more tightly grouped on the possession spectrum. 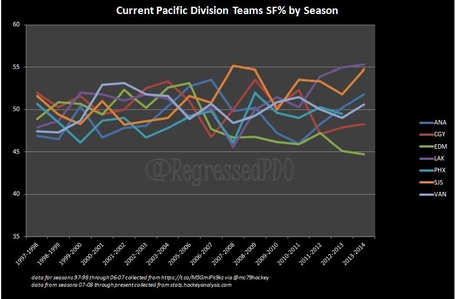 The Edmonton Oilers continue on their long road toward a rebuild of their former powerhouse position. The LA Kings have really shot skyward in terms of SF% and currently lead the NHL in this metric as well as Fenwick For percentage. The San Jose Sharks are also sustaining their offensive dominance. The Pacific teams seem to be spreading out to reveal a serious lack of parity in the division which should come as no shock to anyone. 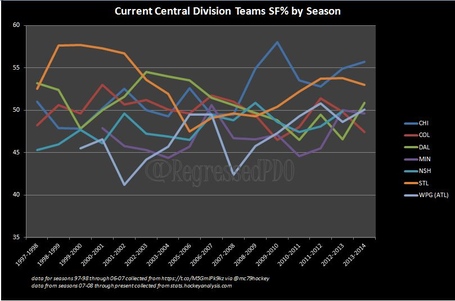 The Central is a bit more spread out over time than the other divisions. Obviously, these teams have not been playing each other as divisional foes for all of this time, but the dominance of the St. Louis Blues and Chicago Blackhawks for the past several seasons is striking. this also leads to another point of interest. The early years on this chart in which the Blues were dominant, the middle years wherein the Colorado Avalanche were near the top and the last several years which feature the Blackhawks dominating possession, all have one thing in common: the coach of each of those teams. 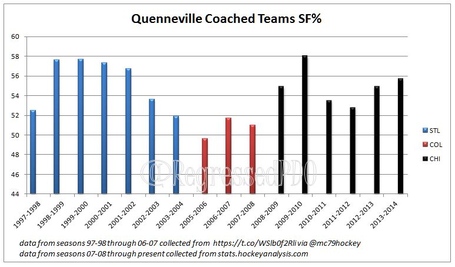 Joel Quenneville has coached the Blues, Avalanche and Blackhawks. The SF% for each season of his coaching career are above. Only one of those teams, the 2005-2006 Avalanche finished the season with less than 50% SF%. This track record is very impressive. It is obvious that Quenneville has a good grasp on coaching puck possession and using his star players and depth players in such a way as to maximize their effectiveness in this regard.

Links to helpful articles regarding SF% and it's uses:

Dellow's original article on this topic is here and I highly recommend reading it: http://www.mc79hockey.com/?p=6451

How I Stopped Worrying And Learned To Love Fancy Stats