Share All sharing options for: What's the series at? Iceho-uh, Blackhawks beat Blues 4-2

"What's the series at?" St. Louis Blues head coach Ken Hitchcock asked a reporter who questioned him about the Blues' last two games in Chicago, where they have lost by a combined score of 8-2. He then walked out of the press conference. Terrific.

The shorthanded Chicago Blackhawks defeated the St. Louis Blues 4-2. Missing players such as Jonathan Toews, Patrick Kane and Brandon Saad, other players needed to step up and contribute in their absence. And that they did. Patrick Sharp was the only Blackhawks top-six goal-scorer. The rest came from Jeremy Morin, Marcus Kruger and Ben Smith. The bottom-six starred today, combining for six of the nine points Hawks players accumulated today.

This game meant next-to-nothing in the grand scheme of things for Chicago. The Hawks now sit one point behind the Colorado Avalanche in the standings but the Avs have two games in hand. Leapfrogging the Avs with only three games left to do it seems unlikely. On the other hand, the Blues now sit two points behind the Boston Bruins in the President's Trophy race with the same number of games played. The road to the Cup Final for the Western Conference will most likely go through St. Louis, but the loss puts a damper on the Blues' chances of winning the President's Trophy.

So the fact the depleted Hawks outshot the Blues 34-23, won by a two-goal margin and did so without any serious injuries is just the tops. To the stats and then the notes.

*Let's start with the bad. Here's a sentence you've thought a million times: Andrew Shaw really needs to cut the crap. His shenanigans opened the door for a Blues power-play goal just under two minutes into the game. While I'm still wondering how Carlo Colaiacovo avoided the box after an early-first period scuffle with Shaw, that's beside the point. Shaw is a productive possession player and power-play goalie nuisance, but he can't be putting his team on the penalty kill, especially with the playoffs only a few games away. It's probably not a good idea to give Nathan MacKinnon, Matt Duchene and Gabriel Landeskog any extra chance to hurt you.

*It was inevitable, but Brandon Bollig and Ryan Reaves had their obligatory and terrible scripted fight. At least it kept those two off of the ice for a while. Lots of hugging and not actual fighting. It was about what you would expect from those two.

*Credit where credit is due; the threat of a Bollig hit on Steve Ott caused Ott to panic and throw the puck to the other side of the rink, where Joakim Nordstrom took the puck across the blueline and shot it, allowing Marcus Kruger to slam home the rebound.Of course, this means Bollig will never ever be benched by Quenneville again but then again, it's not like there was ever a chance of him being benched anyway.

*It's going to be so maddening when the person who gets benched instead of Bollig is Jeremy Morin. Man, was he good today. A goal, an assist and a +32.5 percent (!) Corsi for relative to his teammates in only 13:15 TOI. He dominated possession to the tune of an 84.2 Corsi for percent today. He crashed the net on a Bryan Bickell shot and got rewarded for it when Brian Elliott was oblivious to the location of the rebound he gave up. Morin's feed to Sharp on the 2-on-1 was right in Sharp's wheelhouse. More Morin please. More Bickell-Regin-Morin line please. Really, more of basically all of what the bottom-six did today please. They were stellar.

*I lost count of the number of times David Backes hit somebody from behind or shoved somebody after the whistle today. But at least he likes dogs!!!!!!!!

*The Hawks out-attempted the Blues by a ridiculous margin after the first period. Then they outshot the Blues 23-11 after the second. The final shot attempt numbers for the game were 60-38 in favor of the Hawks. If the Toews-less/Kane-less/Saad-less/Oduya-less Hawks can do that to a team like the Blues, that's certainly not a bad thing.

*Scratching Saad to protect him from the Blues is one thing. Scratching Saad because Q says he needs "more" from him is quite another thing altogether. Saad is the second-best forward on the team in terms of puck possession stats and has been above 58 percent in Corsi for percent in two of his last three games. As long as he's in the lineup come April 16, I guess it doesn't matter.

*Vintage Marian Hossa today. He was a horse with the puck today, weaving around just about anybody he wanted to. He was just as good without the puck too, again showing why he is one of the best defensive forwards in the NHL. Benching him in anticipation of Blues shenanigans today wouldn't have been the worst idea, but he made it out alive and played exceptionally well.

*Dear NBC: The only time Roman Polak will be a significant contributor to his team this spring is when Tyler Seguin and Jamie Benn eat him alive for the series-winning goal in the Blues' inevitable annual 6-game collapse to a supposedly inferior team. 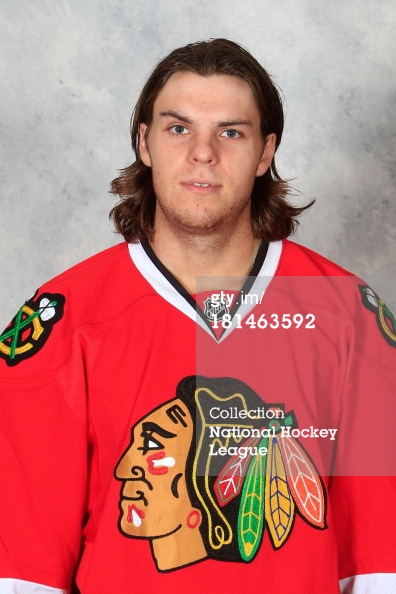 There is not a picture of Jeremy Morin anywhere on the Internet better than this one.