Blackhawks Beat The Habs In OT (not a typo)

The Blackhawks score their first overtime goal of the season in their final home game to extend their winning streak to four.

Share All sharing options for: Blackhawks Beat The Habs In OT (not a typo)

The 41st and final home game of the 2013-14 regular season might have been the strangest of them all.  Speaking of the strange, the Blackhawks are 4-0 without both Patrick Kane and Jonathan Toews.  Let that sink in for a second or two.  Ok, ready for the recap?

If you got up to make a sandwich at the start of the game you missed half the 1st period and plenty of Montreal scoring chances.  The Hawks played sloppy off the opening draw and gave up a few odd man rushes during the first half of the opening frame.  The Canadiens got a few chances during 7:28 of whistle free hockey, but a couple of miscues from the Habs and some big saves from Corey Crawford kept the game scoreless.  The Blackhawks attempted 27 shots in the first period but only got 11 on net, mostly due to 14 shot blocks by the Habs.

Things took a turn for the worst for the Hawks in the 2nd period as they were out shout 10-6.  The Blackhawks were very sloppy in their own end.  They had way too many unforced errors that led to turnovers in the defensive zone.  Once again, the Blackhawks were lucky to get to the intermission in a scoreless tie.

Heading into the 3rd period, I had a feeling the first goal of the game was going to come off a goofy bounce and I was right.  Dale Weise was in the right place at the right time, at 7:41, as a Josh Gorges shot deflected off the sticks of Brent Seabrook and Duncan Keith right to Weise who scored his sixth goal of the season.  Jeremy Morin would tie the game with another great wrist shot at 10:34, from nearly the same spot on the ice he scored from Friday night in Columbus.  Sheldon Brookbank did a nice jump keeping a bouncing puck in the zone and got it to Morin who sniped a beautiful shot past Peter Budaj from the right dot.  It took all of 22 seconds for Francis Boullion, or Frankie Cup of Soup if he was in a mob movie, to give the Habs the lead back as his shot from the point found its way through traffic and into the net.  With Corey Crawford on the bench for the extra attacker, the Blackhawks were able to tie up the game with just 48 seconds left in regulation.  Marian Hossa got position in between Mike Weaver and Peter Budaj and Patrick Sharp hit his stick with a great pass for his 29th goal of the season.

Into overtime the Blackhawks and Canadiens went which means certain doom for the boys in red, right?  Not this time! 43 seconds into the extra time, Duncan Keith found Patrick Sharp in the slot who quickly fired a wrist shot at the net.  Peter Budaj made the save but the puck popped straight up in the air and he looked to swat it backwards into his own net with his paddle.  Sometimes it's better to be lucky than good.

* Nothing makes me miss Patrick Kane more than watching Kris Versteeg on the top power play unit.  I am finding very few reasons for Versteeg to suit up for game one of the playoffs if everyone is healthy like they are supposed be.

* Niklas Hjalmarsson looks like a guy that could use a weekend off before the playoffs begin.  Hjammer has been the best defensive blue liner all season long but had a rough one Wednesday.  He seemed to be flat footed and yippy with the puck all night long.

* It was great to see Brandon Saad respond to his benching on Sunday.  He didn't show up on the scoresheet but he was much more noticeable than he had been in a couple of weeks. He finished the night with a 5 on 5 61.9 CF%.  If being benched had this effect on Saad, let's see what it could do for Versteeg. 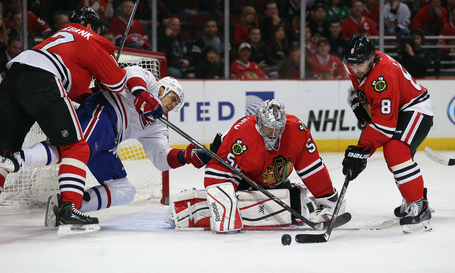 Corey Crawford was not very kind to his hometown team Wednesday.  The only reason the Blackhawks were able to pull off their late game comeback was because of Crow's heroics during regulation, especially in the first eight minutes of the game.  Crawford gave up soft goals late in the 3rd period of his last two starts but he that would not be the case against the Habs.  It will be interesting to see if Corey gets any action over the weekend.  I guess that will depend on if the Avalanche beat the Canucks Thursday night.