Share All sharing options for: Blackhawks Zone Entries & Shot Generation In The Playoffs

I was finally able to go back and get Game 4 of the Blackhawks vs Wild series tracked again after I lost the data so I can finally share it with all of you. I plan to do a bigger post with some breakdowns on lines that include the games against the Blues and Kings as well.

For those not very familiar with zone entry data, I'll quickly explain what this is and why it is important. Zone Entry is how the team moves the puck into the offensive zone. Tons of research and data has shown that carrying the puck into the offensive zone leads to more shots than simply dumping the puck in and trying to get it back in the zone. For this reason, many teams such as the Blackhawks prefer to carry the puck or use a short pass across the blue line where possible. The Wild are a team that plays quite a bit of neutral zone trap to stop this from happening. In many instances, their schemes worked and normally good zone entry players were forced to dump in or chip in the puck and begin the battle to regain possession.

Usually, the forwards are going to have a far greater number of controlled zone entries than defensemen. This is particularly true of the Blackhawks as they like to use stretch passes to activate a rush for the offense through the neutral zone so do not be surprised by a lack of controlled entries by any particular defenseman. Also, please note that this is a measure of zone entries during 5v5 play and the totals do not include zone entries on the power play or the penalty kill.

I have sorted the forwards by their Controlled Entry Percentage to show how likely these players were to carry the puck into the zone instead of dumping it in and then trying to regain possession. It should come as no surprise to anyone that Patrick Kane led the team in controlled offensive zone entries. This is one of the most difficult of his talents to deal with for other teams. Kane was also the most productive in terms of his rate of generating shots for the Blackhawks. Marian Hossa is also a very strong neutral zone player and generated shots at nearly the same rate as Kane. Bryan Bickell was able to capitalize on having Toews and Hossa as linemates in several games and generate offense as well. Brandon Saad, Patrick Sharp and Jonathan Toews were targets of Minnesota's trap on a regular basis but were able to keep their zone entries controlled often as well.

Some of the more surprising numbers come from Marcus Kruger and Joakim Nordstrom. Both had good controlled entry percentages when you consider they were running up against the trap and produced a surprising shot rate as a result. This is quite encouraging particularly in light of the roles they play on the team and the heavy number of defensive zone starts they are given.

Ben Smith was able to carry in the puck; however, his biggest problem comes a few strides into the offensive zone where he is often muscled off of the puck. While he is good along the boards and helps retrieve dump ins or win possession back, he is better on a line with other strong puck movers in order to correct for this. For the time they get and the linemates they have, Kris Versteeg and Michal Handzus put up very disappointing numbers during the Minnesota series. They generated very little in terms of shots and were easily contained by Minnesota's neutral zone trap.

I've broken their numbers down by game so we can see how the series progressed. The tables after the charts include the overall numbers for the team. Please note that you can click on the graphs to see a larger image. Also, the FF% (Fenwick For Percentage) is for 5v5 play for the overall game. Shots may be generated from things other than zone entries so do not be thrown off if the percentages seem a little different than the raw numbers. The FF% and TOI (Time on Ice) used herein were collected from www.extraskater.com but all other data used herein is from my tracking of the games. 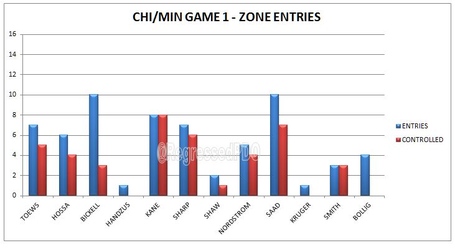 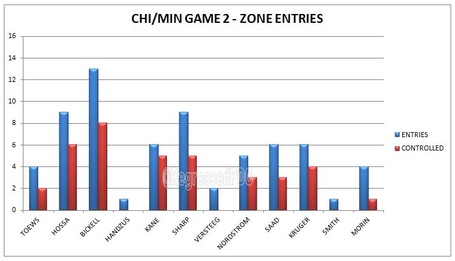 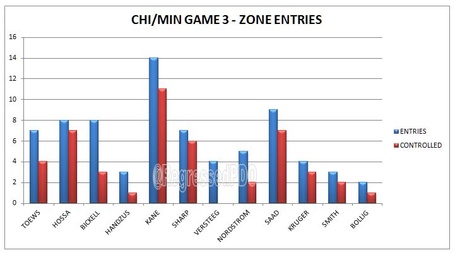 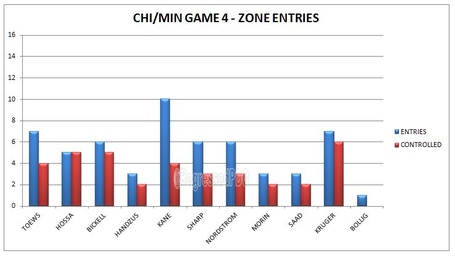 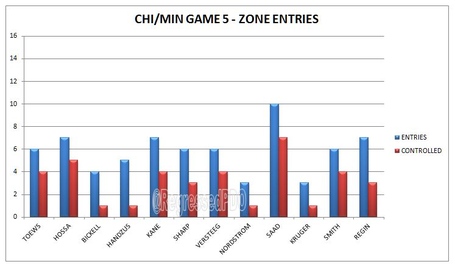 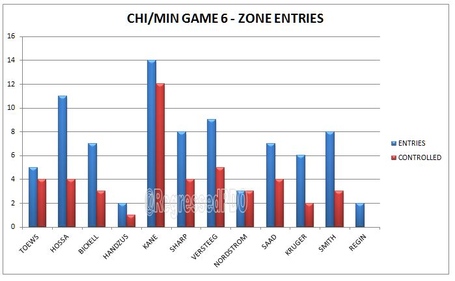 The important thing to look at for the defensemen is the shots they generate from zone entries regardless of the type. Defensemen often dump the puck in more often than forwards out of necessity and that is particularly the case against a team like Minnesota that runs a neutral zone trap to discourage controlled zone entries. While Brent Seabrook did not carry the puck into the zone at 5v5, he did dump it in and those actions generated shots. Nick Leddy has been outstanding all season in terms of controlled zone entries, but his 44% rate of carry ins against a team like Minnesota is really terrific. He also did well at generating shots along with his defensive partner, Michal Rozsival, who had the best rates of the defensemen for generating offense from his zone entries.

Duncan Keith did not do well against Minnesota's trap system. Obviously he and Seabrook prefer to use the stretch pass to get the offense going from the defensive zone, but I would have expected these numbers to be better for Keith. The Blackhawks did target some of Minnesota's defensemen, although I don't have all of the data on this yet, so this may be a function of getting the puck to Seabrook due to the side of the ice they are targeting.

Overall, Minnesota's neutral zone trap did work well to disrupt the normal flow of Chicago's offense; however, in the end, the talented forwards were able to find ways to score and win the series. I have also been tracking the series with the LA Kings and will have more to post on that very soon, but in the meantime, here are some tables for the first four games against LA to give you an idea of how this series is shaping up from a zone entries perspective. 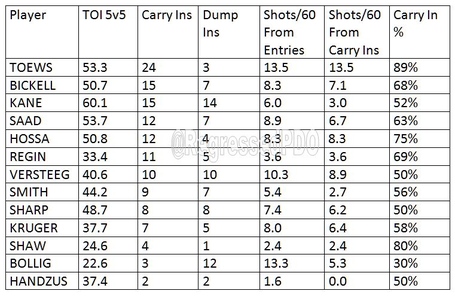 Against LA, the Blackhawks have started, in the last two games, to generate more shots off of dump ins, but still are clearly much more effective when the puck is carried into the zone. More on this soon.