Blackhawks Jump Out To A 2-0 Series Lead

The Blackhawks win their sixth straight playoff game and grab a 2-0 series lead after a 4-1 win over the Wild.

Share All sharing options for: Blackhawks Jump Out To A 2-0 Series Lead

For the second year in a row the Blackhawks head to St. Paul with a 2-0 series lead over the Minnesota Wild.  The Blackhawks have taken 2-0 leads into the 3rd period of both games of this series, only to make things interesting before winning by three goals.

Jonathan Toews opened up the scoring at 11:02 of the 1st period.  Byran Bickell made a nice pass into the neutral zone to find a wide open Marian Hossa who had sneaked in behind the Wild defensemen.  Ilya Bryzgalov made a nice pad save on Hossa's shot but Towes got right in front of the net to put in the rebound thanks to Mikko Koivu having no interest in backchecking.

The Wild dominated the Hawks in the 2nd period of Game 1, but that  wasn't the case on Sunday the period was more even than it was on Friday.  Brandon Saad would score his first goal of the playoffs at 19:02, just as a Blackhawks' power play was expiring.  Saad made a pass over to Bryan Bickell over to the left boards but he could not handle it cleanly.  Bickell settled down the puck and got it back to Saad in the slot who floated a wrist shot over Bryzgalov's right shoulder.

The Wild would cut the Hawks' lead in half just two minutes into the 3rd period.  Cody McCormick scored his first career playoff goal, from the slot, after some nice cross ice passing from Clayton Stoner and Erik Haula.  A couple of moments after hitting the crossbar, Wild killer Bryan Bickell gave the Hawks an insurance goal when he flicked a wrist shot over Brzygalov's glove hand from the left circle.  Marian Hossa and Niklas Hjalmarsson assisted on Bickell's third goal of the series and fifth of the playoffs. The same duo both asissted on Brandon Saad's empty net goal that iced the game at 18:37.

* The Blackhawks are sitting pretty being up 2-0 but both of these team fell down 0-2 in the 1st round so this series is far from over.  But, with that being said, if the Wild are only going to get goals from guys like Brodziak, Stoner and McCormick this series will not come back to Chicago.  The Blackhawks are doing a great job at forcing the Wild's bottom six to beat them because we all know that just isn't going to happen.

* Things I stopped believing in before today; Santa Claus and the Easter Bunny are real and Joel Quennville would never play Jeremy Morin over Brandon Bollig. Morin wasn't spectacular, but I was so thrilled to finally see Bollig get a well deserved benching.  If you need to know why Bollig didn't deserve to play Sunday, just watch the entire sequence of Minnesota's second goal on Friday night.  Morin, Handzus and Versteeg is a much better 4th line combination, and hopefully it stays together once Andrew Shaw returns.

* Marian Hossa is dominating this series right now. He has six points after two games and is just a machine.  The fact that the mainstream media doesn't "pump his tires" more blows my mind because he is the most complete hockey player in the NHL.

* Good to see Brandon Saad light the lamp.  He has been really good this postseason by racking up primary assists and playing solid defense.  Hopefully his 2nd period goal will get his scoring going because if he starts becoming a scoring threat the Hawks are virtually unbeatable.

* Looks like Nick Leddy is back in Q's doghouse.  He only got eight shifts after the 3rd period and just 46 seconds of TOI in the 3rd period.  I didn't notice anything specific that warranted this but hopefully this is just Q sending a message.  Leddy has been a solid contributor all season long and would hate to see him screw that up with some lackluster play in the postseason. 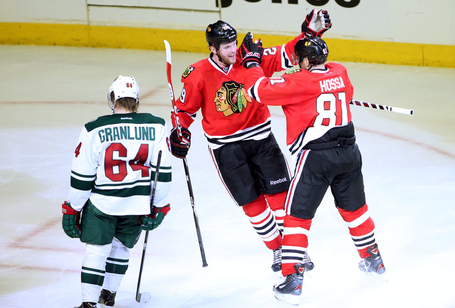 Is Bryan Bickell becoming this generation's version of Claude Lemieux? Maybe. Bicks should get some stock in the Wild because he owns them in the postseason.  Ronnie Pickle now has ten points in seven career postseason games versus Minnesota.  I don't think it's any kind of coincidence that he produces more in the playoffs when he gets lined up with elite players.  I would like to see Bicks get some time on the top power play play line because he has the size and the hands to cause some major damage.  Anyone else think it's weird that you don't hear a whole lot about how much Bickell's contract is worth these day?