In January, we took a close look at Bickell's play and now that the playoffs are here, it's time to revisit that analysis.

Bryan Bickell has 5 goals and 3 assists over the past 5 games of the playoffs. Over the 59 games he played during the regular season, Bickell had 11 goals and 4 assists. All season, there has been much hand wringing over Bickell's performance and his shiny new contract. It would seem that many have forgotten how he played in the regular season and playoffs in years past. Fortunately, for the Blackhawks and the fan base, those complaints will be put on the shelf until the 2014-15 regular season.

Over the past three seasons, Bickell has seen his ice time steadily decrease but has kept his production fairly consistent with the exception of assists although his linemates had a rough time scoring much of the season as well, particularly Michal Handzus and Kris Versteeg. *please click on the graphs to see a larger image. 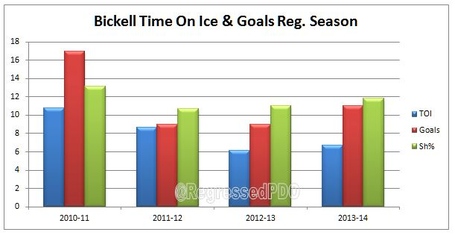 Bickell had 2 more goals this season with only a mild increase in his total time on ice from last season, mostly due to being out with injury as opposed to playing all of the regular season games during the 2012-13 campaign. He has been very strong this season in terms of possession despite his lower ice time. 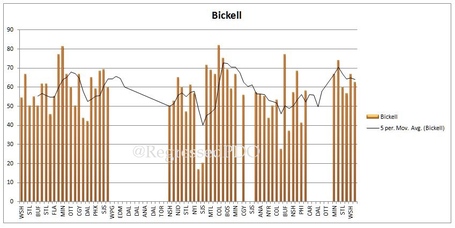 His 5 game rolling average in the regular season ended right around 65%. This is a very good sign for him particularly given how many changes in linemates he went through during the regular season. In the playoffs, Bickell is sitting at 57.4% CF% at 5v5 which is the highest percentage for any of the forwards on the team. 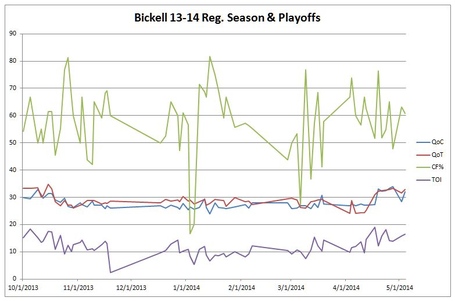 The graph above plots out Bickell's TOI (Time on Ice) at the bottom, his QoT (Quality of Teammates - on ice), QoC (Quality of Competition - on ice) and finally his CF% (Corsi For % at 5v5). This may just look like a bunch of random lines until we filter out some of the noise.

First, when we look at QoT and QoC, we note that Bickell started the season on a better line than he would have for the remainder of the regular season. He is back on the top line now that the playoffs have come around again. Next, we use his 5 game rolling average for CF% instead of individual games and match that with his time on ice. 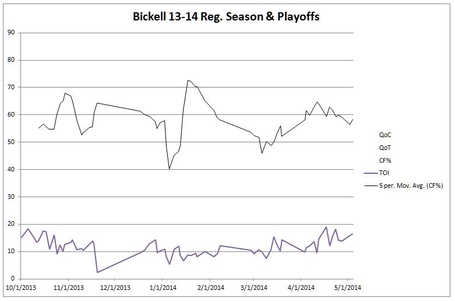 This shows an interesting correlation. Other than his average being sunk for a bit by one really poor possession game, you'll note that Bickell's TOI and CF% Avg tend to mirror one another. This is fascinating because his time on ice is also closely tied with which line he plays on. When he plays with the Toews line, his time on ice goes up as does his QoT and his CF%, but his QoC also goes up. Essentially, this shows us that with better linemates, such as Toews, Bickell is completely capable of remaining a very good possession player despite having to play against much tougher competition.

As of May 6, 2014, Bickell is tied for second in the league with Corey Perry of the Anaheim Ducks during the playoffs in facing the toughest quality of competition. Only his linemate, Jonathan Toews has a higher QoC. It's hard to argue that Bickell has not done well against this competition given his goal production since the playoffs started.

What seems to be happening here is that Bickell is allowed to be a bigger offensive threat when on a line with other offensive threats. He in turn also allows those players a bit more freedom to work their offensive game. A drastic example of this during the regular season comes from comparing how Bickell and Patrick Kane fared together and apart. 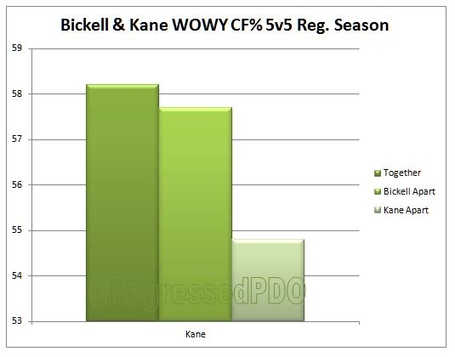 When Patrick Kane was on the ice with Bickell during the regular season, their CF% was above 58%. When Kane was apart from Bickell at 5v5, his CF% fell to under 55%. This is just another example of varying the offensive threats on a line by adding Bickell. He really is an excellent complement to a line with an elite scorer.

Bickell's WOWYs (Without & With You) numbers are interesting as well even though some of this is also dependent upon usage. 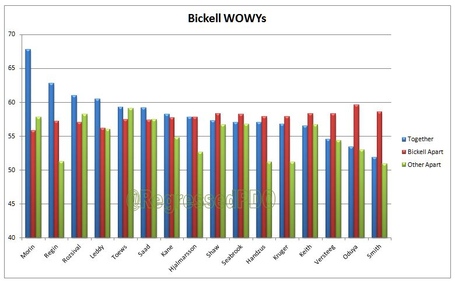 This graph is ordered from the highest CF% Together to the lowest.  Breaking this down in increments based upon how much time on ice the players had with Bickell helps filter out some of the noise. 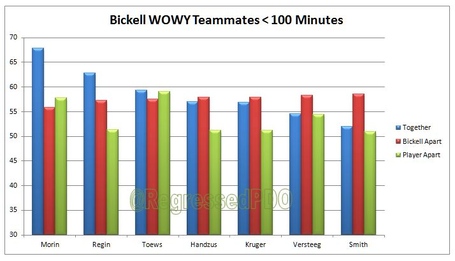 The players in the graph above had under 100 minutes of ice time with Bickell at 5v5. Morin, Bickell and Regin had a nice run of games near the end of the season wherein they had outstanding possession numbers and produced offensively as well. Other than Toews, who was nearly equal with and without Bickell skating with him, skating with Bickell increased possession for all of these players. We can also see that Bickell does significantly better skating apart from Ben Smith and Marcus Kruger, although I would have to think this is related far more to usage (i.e. zone starts) than any real lack of skill together. 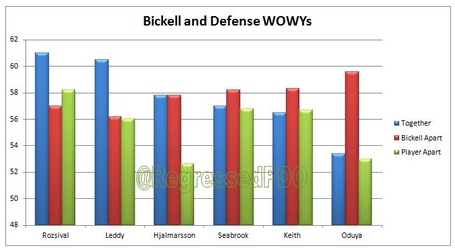 Bickell's WOWYs in regard to the Defensemen is a study in usage. Michal Rozsival and Nick Leddy are frequently used against lower competition and in offensive zone starts so it makes sense that having a strong possession player such as Bickell on the ice with them would increase their effectiveness. Leddy has the highest time on ice with Bickell of the defensemen. His numbers with Brent Seabrook and Duncan Keith likely reflect the increase in the Quality of Competition without the increase in the Quality of Teammates. Essentially, the players out against him are better but he did not have the benefit of having better forwards as linemates and thus the percentage point drop in CF%.

The disparity in the numbers for Bickell and Oduya is a bit more difficult to understand and frankly I have not gone through enough of the shifts game by game together to get a firm grasp on the reasoning here. My gut reaction to this is that some of the games where Bickell was on the ice with Oduya featured heavy defensive zone starts and perhaps some switched up defensive pairings that with a large time on ice sample size allowed the detrimental affects of those poor performances to be phased out or corrected for. 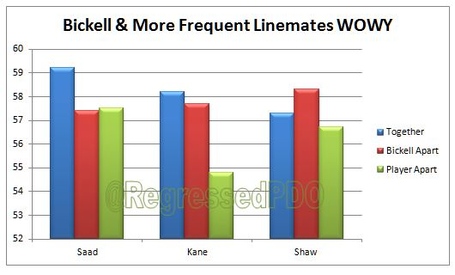 So despite being a solid possession player all season and making his teammates better possession players, Bickell struggled with healthy scratches and reduced ice time. Some of this is likely do to behind the scenes motivational techniques by Coach Joel Quenneville but from what we can see and quantify through numbers some of it is just bad luck. PDO is a statistic in hockey that measures luck. Over a long period of time, PDO regresses from either being very high or very low back to 1000 (or 100.0 or 1.00 depending on the style you prefer). PDO combines shooting percentage and on ice save percentage to determine if a player or team is relying heavily on great shooting or great goaltending. Sometimes it is both and sometimes you get neither and PDO reflects that. It may seem like no big deal but it is useful in analyzing why a good player has a poor season or a not so great player has an amazing playoff run. In the playoffs, because it is such a short time frame, you want your team and the players to have a high PDO because you are not at all worried about regression. During the regular season or a few seasons, PDO helps figure out which players or teams may see the bottom drop out if specific performers or areas of play falter.

In terms of Bryan Bickell's PDO, his spate of bad luck this season was almost comical. Despite his strong possession numbers (which are calculated using shots for and against) Bickell's on ice shooting percentage at 5v5 was a paltry 6.42%. This ranked him at 19th out of the 23 players who were on the ice for at least 100 minutes at 5v5 for the Blackhawks this season. His on ice save percentage at 5v5 was 89.30%, good for last place on the team. After researching and reading research done by others, I learned that on ice Sv% is not at all useful over a season or longer term to assess the defensive play of forwards as there is just no correlation between the two. What I mean is that there is no statistically viable basis from which to pin the poor Sv% on Bickell. What we can take away from this is that he was simply unlucky in this regard. That does not mean he did not make a mistake that led to a goal, but it does mean that he was not responsible for all the goals scored while he was on the ice.

In order to put Bickell's unlucky streak in context, we can look at the players around the league that had similar possession numbers to his and see how they did in terms of PDO.

There are some very impressive names on this list of the top 25 possession forwards in the NHL this season. The thing to note about Bickell is that he came in 8th in the league in terms of forwards at even strength with the score close. He did so with a shooting percentage on the low side much like Dustin Brown who had a tough year in terms of offensive production. The other important part of this equation is the on ice save percentage. Bickell's is obviously the lowest on this list. His PDO is far below that of his counterparts on this list. In fact, while he came in 8th out of 376 players that were in this category, if we take this same group of players and rank them by PDO, Bickell would come in an astounding 367th. Only 9 other players on this list had a lower PDO this season.

What we can take from all of this is that Bickell's first season of his new contract has been seriously hampered by bad luck. No, Bryan Bickell is not the best player in the league or even on this team, but he is a good possession player who can help give some of the elite players on the Blackhawks some room to work with. This is why he has such good playoff production. When his time on ice increases his level of play increases. When his quality of linemates increases, his level of play increases even in spite of the increase in the quality of his competition. If he is not bitten by injury during the playoffs (cross your fingers Blackhawks fans) then look for Bickell to continue being productive.