A Tale of Two Coaches: Quenneville vs Carlyle

Share All sharing options for: A Tale of Two Coaches: Quenneville vs Carlyle

With the recent clamor over Toronto Maple Leaf's head coach Randy Carlyle not only being retained for the final year of his contract but given an additional two year extension beyond that, many in the hockey blogosphere were left fretting. The Leafs problems with puck possession have been well documented over the past few seasons and with the retention of Carlyle, things do not look to be changing in this regard.

The very smart folks at Pension Plan Puppets have covered this extensively and have mentioned on more than a few occasions that Carlyle seems to have a reputation built upon a foundation of good goal tending. This made me wonder how Chicago Blackhawks head coach Joel Quenneville would compare. Quenneville has been coaching longer than Carlyle but the comparisons are a study in opposite methodologies at least from a numbers perspective. 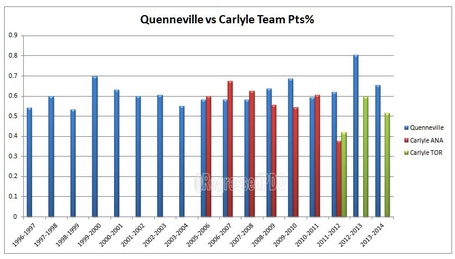 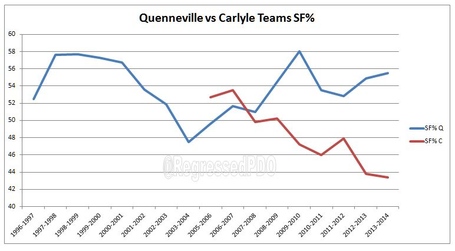 This is one of the two most important and telling comparisons of these two coaches. While many believe Quenneville is a defense first coach, he really is a puck possession first coach. That puck possession just happens to start with his defensemen. Shots For Percentage (SF%) is a very good indicator of team success over the long term. SF% is very similar to Corsi and Fenwick. As you can see from the chart, there have only been two seasons during which Quenneville's team has dipped below 50% in SF%. This means that only two of his teams have had the puck less than their opponents over the course of the regular season. Carlyle's teams have continually gotten worse at puck possession as his career has progressed and bottomed out this season with the Leafs. 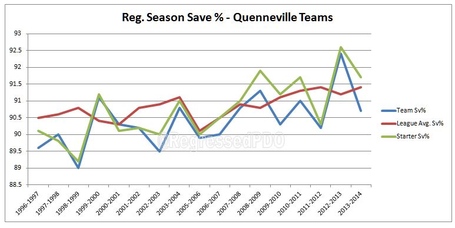 This is the second of the very important sets of data regarding these coaches. Quenneville has benefited from above league average goaltending from his starting goalie only a handful of times during his career. When you look at the numbers from a team Sv% perspective that numbers gets even smaller.

Compare that to the goaltending that Carlyle has enjoyed and the differences are obvious. Carlyle's starting goalie has been below league average in terms of Sv% only once during his career. That happens to coincide with the season he was let go from the Anaheim Ducks and subsequently hired by the Toronto Maple Leafs. What the SF% and Sv% sections of this analysis show us is that Quenneville has built his reputation on puck possession while Carlyle has built his upon the backs of good starting goaltenders.

Quenneville has had two 40+ goal scorers on his teams only twice in his career, both of which occurred long ago. Carlyle has had two seasons of Teemu Selanne scoring 40 goals or more and one of Corey Perry scoring 50 goals. Quenneville's teams tend to have more 20+ goal scorers perhaps indicating greater depth in his lineup than Carlyle's. 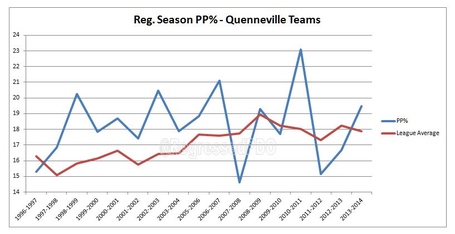 The specials teams graphs are not quite as telling about the head coaches as many times, assistant coaches are doing the more hands on work on special teams, but they are none the less interesting. Quenneville's struggles with his team's power play only really started in Chicago. Carlyle has had a below league average power play only twice. Penalty Killing seems to be a problem for Carlyle coached teams with only one very strong season of PK% recently. Quenneville again seems to hit or miss with the Penalty Kill although in the second half of the current season and in the playoffs, the PK% has been quite good.

*data used herein was collected from: