This year we are going to tackle our report cards a little differently, by having each staff member grade the players. Tonight we start with Norris Trophy finalist 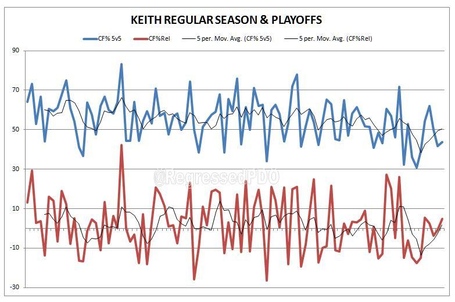 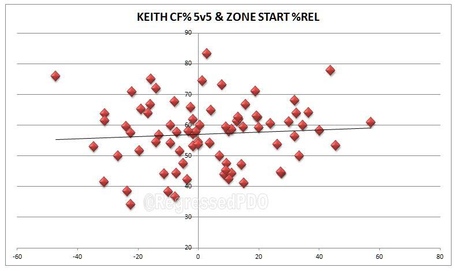 After his down seasons of 2011 and 2012, I never thought Duncan Keith would ever be considered for a Norris Trophy again.  The extra time off with the lockout of 2012-13 seemed to put the spring back in Keith's legs and he is not only a Norris finalist this summer, but has a really good shot of taking home the award for the NHL's best defenseman.  He had himself quite a season despite his longtime partner, Brent Seabrook, having a very inconsistent season to say the least. Despite being the Blackhawks' "#1 pair" Keith usually didn't face the opponent's top line, as that role was usually reserved for Johnny Oduya and Niklas Hjalmarsson.  Keith led the team in time on ice with 24:38 per game and he was on the ice for 37.2% of even strength time the entire year.  Keith is a work horse and eats up important minutes every single night, which is exactly what you want out of your top blueliner.  His 55 assists led all defensemen and was the sixth most in the NHL.  In today's NHL that is what gets you nominated for the Norris.  I still don't think Keith is the ideal power play quarterback.  He needs to learn how to shoot a one timer.  It seems that every time he gets the puck at the point he waits for the defenders to get into position so he can shoot the puck directly into their shins.  Overall, Keith had a really good season and deserves any accolades that come his way this summer.

What can be said about the year DK2 had? He played the heaviest, though not the hardest, minutes among the Blackhawks D corp. He racked up 61 points in the regular season and is probably going to win another Norris whether you think he deserves it or not. Keith's production and possession slipped in the playoffs, but he was hardly the raison d'etre for the Hawks exit. The top defenseman will be back next year, hitting stretch passes and missing the net from the point as is his wont.

Duncan Keith was named as a Norris Trophy finalist when the 2013-2014 season awards were announced. As is usually the case with Norris finalists, Keith's nomination likely stems from his offensive contributions more than his defensive contributions. That's not to say Keith had a poor season defensively; he did not. He was not flawless, as he was prone to the occasional boneheaded cross pass at the blue line or the yips in his own end. But he provided the steady blue line presence the Blackhawks have grown accustomed to. Was it a solid defensive effort from the alternate captain? Yeah. Was it a possible Norris-nominee defensive effort? Nope. Keith was not even the best defensive defenseman on his own team this season, let alone the best in the league. That distinction belongs to one Niklas Hjalmarsson. As previously mentioned, a lot of Keith's success this year came with the puck going the other way. He took advantage of his favorable offensive deployment, as 57 percent of his zone starts came in the offensive zone. He and partner Brent Seabrook also got the benefit of Johnny Oduya and Hjalmarsson playing the toughest competition.  The Blackhawks generated 56.6 percent of even-strength shot attempts when Keith was on the ice. His more traditional numbers stacked up pretty nicely as well. He finished second in the league among defensemen and fourth on the team in points with 61, the second-highest total of his career. His 55 assists tied a career-high he also reached in 2010. All-in-all, the good outweighed the bad, he excelled in his more offensive role and he had himself a nice little season. Hard to think anybody would complain if the Blackhawks got a few more years like this one out of number 2.

Aside from his continuing penchant for shooting the puck directly into the shinpads of the opposition, the 2013-14 campaign was a simply brilliant one for Duncan Keith. As a Norris Trophy finalist, you could very easily make the argument that he was the league's top defenseman last season. That's a pretty big statement, but he has the numbers to back it up. He topped the league with his 55 assists and put up 61 points from the blue line as well, an equally impressive total. No doubt thanks, in large part, to his starting more shifts in the offensive zone than he's used to. We talk about Jonathan Toews being the most important piece to the Hawks, but as we saw this season, it really is impossible to overstate Duncan Keith's value to this team. He continuously logs top minutes from the blue line and is a key part of every element of this team. He tailed off toward the end of the Blackhawks' run this season, but with the likes of Niklas Hjalmarsson and whoever his partner happens to be next year logging minutes against the top competition, we should continue to see Keith be a weapon back there as he was this season.