Today we take a look at our favorite Swede's season.

Thanks to Jen for providing us with this spiffy graphs and charts, as always. 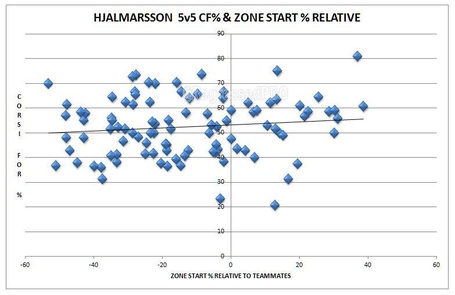 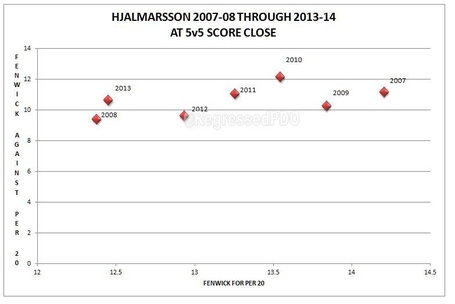 Niklas Hjalmarsson has developed into one of my favorite Blackhawks.  Considering I was ready to drive him to the airport after the 2010-11 season that is quite the accomplishment.  Hjammer is a true warrior and has turned into one of the best stay at home, shot blocking defensemen in the league.  He led the team with 157 blocked shots and had 57 more in the playoffs, including one off his throat which made him unable to speak for a few days.  Hjalmarrson and Johnny Oduya were the Blackhawks' real top pairing as they drew the majority of the ice time against their opponents' top lines.  31% of zone starts came in the defensive end, which led all Blackahwks defensemen.  He was on the ice for 36% of the time during the regular season which was second only to Duncan Keith.  Hjammer was on the ice for 57.2% of the time the Blackhawks were shorthanded, which was by far the most on the team.  I have been saying for years that NHL needs two awards for defensemen.  The Bobby Orr Trophy for the best offensive defenseman and the Norris for stay at home badasses like Niklas Hjalmarsson.

The first half of the Swedish Defense Ministry is up for grading. Hjalmarsson's story is well documented this season. He plays against the opponent's best guys, and starts his ice time in his own end. Despite that, he managed to keep his head above water in corsi. Following the first cup run, there were lingering questions about Hjammer as he struggled to find his footing. The resurgence he had last year continued this season. His offensive game featured an uptick as #OffensiveSensationNiklasHjalmarsson was unleashed at times. His playoff performance was not as stellar. A little yippy and felt the pressure against the huge forechecks of the Blues and Kings. He wasn't an albatross around the Hawks neck, but he could have been better.

Niklas Hjalmarsson followed up his stellar 2012-2013 campaign with a terrific 2013-2014. Hjalmarsson very well could have received a Norris finalist nomination instead of Duncan Keith if the award wasn't often handed out to defensemen with high point totals. He actually set a career high in goals with 4 and points with 26, but that cetainly wasn't enough for him to enter the national Norris conversation. Hjalmarsson took a big step forward last year, becoming the stay-at-home defenseman everybody thought he could be. He continued his rock-solid play throughout this year, sacrificing seemingly every part of his body to block shots and shutting down the opposing team's best forwards. While Duncan Keith and Brent Seabrook are often referred to as the top pairing, Hjalmarsson and Johnny Oduya actually played against the toughest competition among Blackhawks defensemen. The 27-year-old Swede finished the regular season with 54.7 percent of Fenwick events coming from Chicago while he was on the ice. His Corsi percent is slightly closer to 50 percent, but that can be attributed to the absurd amount of shots he blocked, 157 in the regular season and 57 more in the playoffs. He spent a rather significant amount of time bailing out Oduya but likely won't have to next year, with an Oduya trade seemingly on the horizon. In summation, it was a great year from a great defenseman. It'll be interesting to see how Hjalmarsson responds to a different defenseman to his left next year, if Oduya is gone.

I don't think I need to go into tremendous detail as to where I stand on Niklas Hjalmarsson. He's not only a crucial part of this Blackhawks' blue line, but really represents (extremely quietly) one of the best defensemen in the league, when you talk about playing actual defense. What else is there really to say about him? He consistently lines up against the toughest competition, along with (possibly former) defensive partner Johnny Oduya and is as steady as they come in his own zone. Say what you want about the turnovers, he still finished with a very solid +11 in the plus/minus department (I'm lazy). He's a shot blocking force back there and really embodies that whole toughness aspect that hockey fans cling to like Joel Quenneville clings (now past tense) to Michal Handzus. Whether he's taking a shot to the lower extremities or the GODDAMN THROAT, Hjalmarsson nary misses a shift. He's a beauty back there and the Hawks are paying pennies for him for the next several years, compared to what he deserves.