Today we take a look at the other half of the Blackhawks' top defensive pairing. 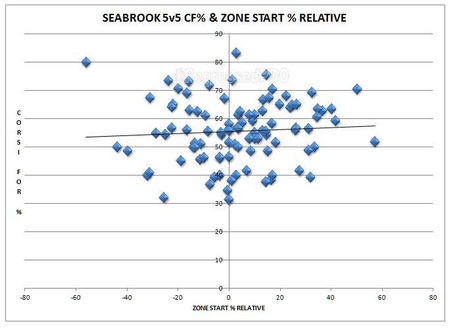 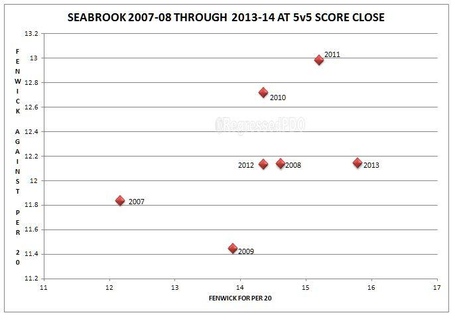 Brent Seabrook is one of the tougher players to grade this season.  I feel Seabrook was a victim of his own success and the expectations that come with those past achievements.  We are so used to the high level of play that Seabrook has given us over the years, that we come to expect that at all times.  But, we didn't get that at all times this year and it causes some of us, myself included, to be hard on him.  Seabs did play at a high level for a majority of the season, but he had his moments of pure disappointment.  If you look at his season on paper you would have to agree with Eddie Olczyk that Seabrook did deserve to represent Canada in the Olympics.  His 34 assists were the fifth most on the team.  His seven goals tied with Nick Leddy for the most among the defensemen.  He had 23 primary points (goals + primary assists) which was eighth on the team and only trailed Duncan Keith's 26 for defensemen.  He had 142 shot blocks, which only trailed Nikas Hjalamarsson.  He was second on the team with 171 hits, which is a big part of his game.  He also credited with 35 takeaways which was second most among the defensemen. The problem was there were moments were Seabs looked as if he had a piano strapped to his back and/or was caught out of position.  The playoffs had some of Seabrook's least favorable moments.  I have never been more disappointed in him than after his illegal hit on David Backes in Game 2 versus the Blues.  He put himself in front of his teammates and could have cost them their season by being suspended for three games with the Hawks in an 0-2 hole.  Thankfully, the Hawks responded and the Blues do what they always do and wet themselves when it mattered most.  The Western Conference Finals was rough for Seabrook.  The Kings relentlessly went to the front of the net and there were times where Seabs looked like he had no interest in getting in between a Los Angeles forward and his goaltender.  To be fair, that was a problem for the entire team not just Brent Seabrook.  I wanted use this time to rip Seabrook apart, but as the pain from the way the season ended and a  review of the overall numbers made me realize he had a pretty good season.  It might not have been the type of season we are used to seeing out of #7, but compared to the rest of the defensemen in the NHL it was a solid year.

Seabrook got a lot of shade thrown at him this season. While the media turned to his +30 rating, the dreaded eye test showed a guy that was flat footed all season and out of position at times. Seabrook helped reinvigorate the penalty kill after the turn of the calendar, and he put together a good offensive campaign as well. He chugged behind the action at some crucial points in the playoffs. It's no surprise Q turned to a Keith/Hjalmarsson pairing late in the Kings series. Seabrook wasn't as bad as most people want to believe, but as part of the core he is subject to a harsher look. As far as the trade whispers go, I don't doubt Stan would listen to offers, but with the pipeline (Dahlbeck, Johns, Clendening, etc) yet to see NHL minutes 7 won't go anywhere.

Brent Seabrook was an easy target for Blackhawks fans - myself included - from the moment the puck dropped in October until the Blackhawks shook hands with the Los Angeles Kings. The usually solid veteran often appeared slow and easily beaten off the puck this year. Seabrook appeared to fail the so-called "eye test" time after time this season. Many fans will remember Seabrook's season with moments like his abysmal pinch in the waning seconds of an October loss to the St. Louis Blues or the Dwight King goal in game 6 in LA. In some respects, it wouldn't be inaccurate to say these moments were a microcosm of his season. While Pat Foley and Eddie Olcyzk were beating the Canadian Olympic team drum for Seabrook, he always seemed to be busy turning the puck over in his own end. In spite of all of that, the possession stats seem to indicate those moments don't tell the whole story about his 2013-2014 season. The Blackhawks generated 56.8 percent of even-strength Corsi events when Seabrook was on the ice. And it's not like he was just a passenger for Keith, either. Keith generated fewer Corsi events when he was paired with defensemen other than Seabrook and vice versa. The numbers seem to support the idea that Seabrook and Keith have a chemistry and play better with each other. In summation, Seabrook's possession play helped the Blackhawks in the long run, in spite of his "eye test" shortcomings throughout the season.